Let me preface this by saying this: I never envisioned myself undergoing any sort of body shaping treatment. I’d always been on the slim side of the body shape spectrum, but thanks to my intense cravings for fat-laden and sugary foods during my latest pregnancy, I ended up putting on a grand total of 11KG.

After subtracting the 3KG baby, my placenta, and other excess water weight, I was left with 4KG of stubborn weight that refused to budge. At 7 weeks postpartum, the infamous mom pooch left my confidence scarred and my body unable to fit into my tighter pairs of high-waisted jeans.

With little to no spare time and energy to exercise, I was happy to play guinea pig for LUSH Aesthetic’s latest Emshape Body Sculpting treatment to see if it could really fix my “mom bod” and lose belly fat.

A 3-in-1 treatment to build muscle, burn fat and sculpt the body 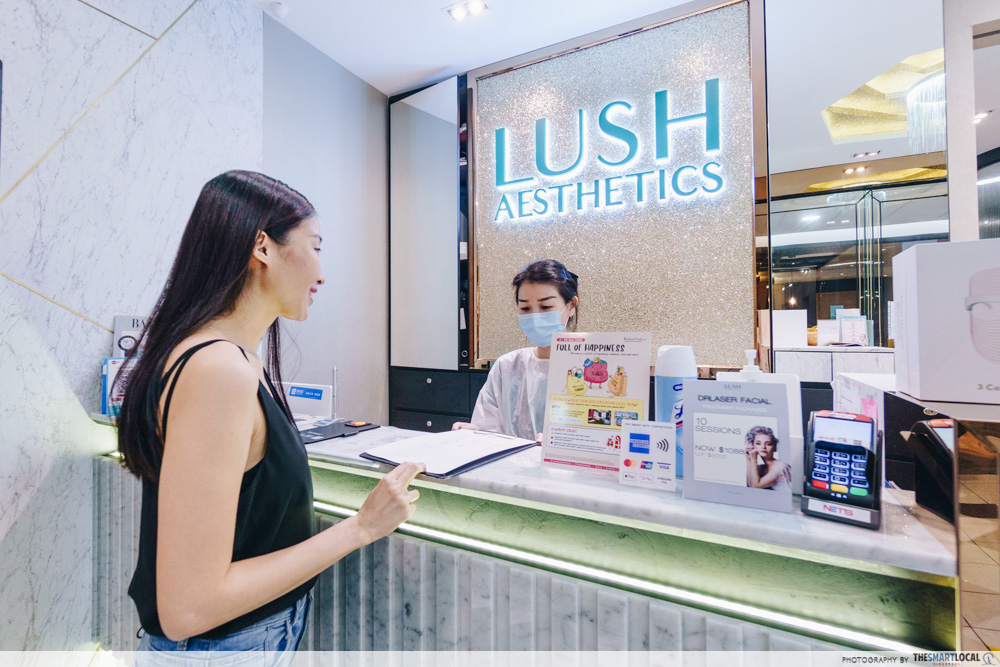 I rolled into LUSH Aesthetics Harbourfront Centre outlet on D-Day not knowing what to expect, but my aesthetician swiftly ushered me into a consultation room and walked me through the science behind the Emshape Body Sculpting treatment.

At this point, it’s important to note that I’m an advocate in the “exercise is the only way to lose weight” camp. So when I was told that the 30-minute Emshape treatment is equivalent to doing 20,000 crunches, I had my brows raised in suspicion. 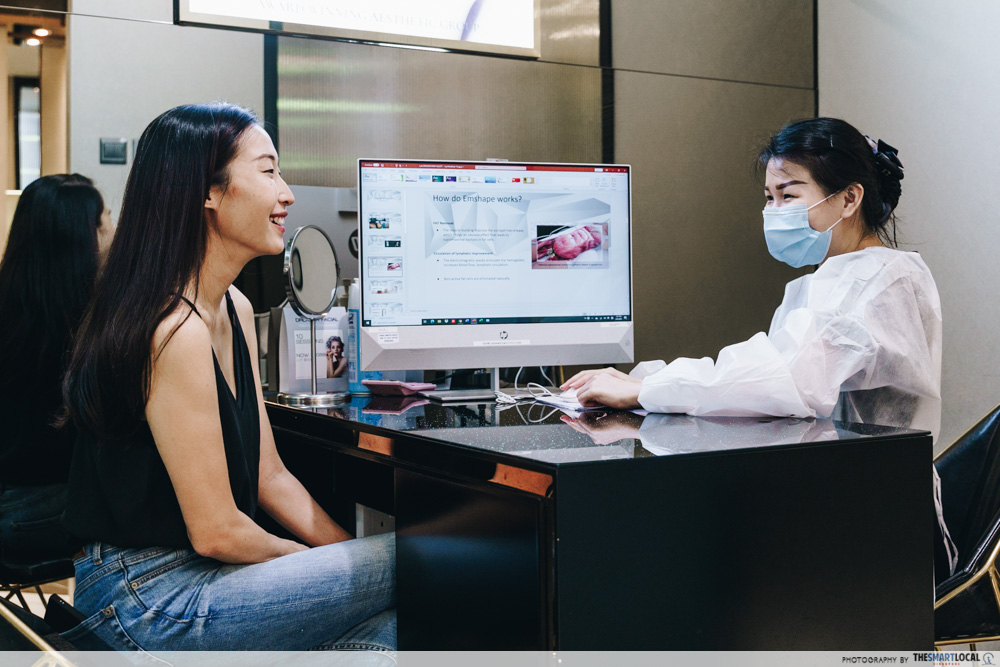 For someone who can probably only accomplish 100 crunches a day at best before having kids, the treatment would be saving myself a painful 200 days of exercise – if I could find the time to exercise at all.

While it does sound too good to be true, the science behind it checks out. The Emshape Body Sculpting treatment is a non-invasive method that uses High Intensity Pulsed ElectroMagnetic (HIPEM) energy to cause muscle contractions that trigger the release of epinephrine a.k.a. Adrenaline, sending your body into ultra fat-burning mode.

The treatment lets you target problem areas, toning and shaping the muscles in the belly, buttocks, arms or thighs. Even if you haven’t popped a child out, you’re still eligible for the treatment as long as you have at least 20mm of fat present on you. 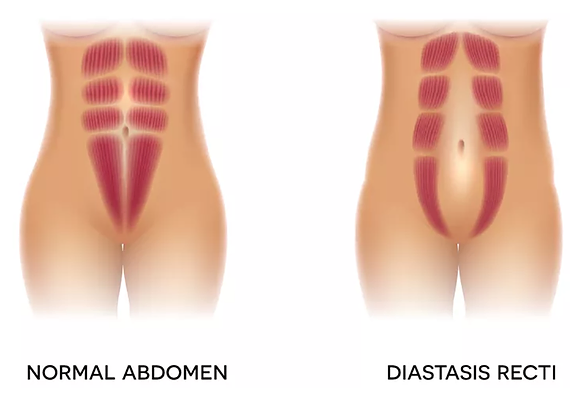 Diastasis recti is a main culprit behind that flabby, soft belly that won’t seem to go away.

On the postpartum front, the Emshape Body Sculpting treatment is also effective for correcting diastasis recti – a common result of pregnancy seen in around 66.67% of women. It works especially well to strengthen the muscles that stretched and parted during those 9 months of pregnancy to make space for your baby.

If you’ve recently given birth, you can refer to this guide on how to tell if you’ve got diastasis recti. 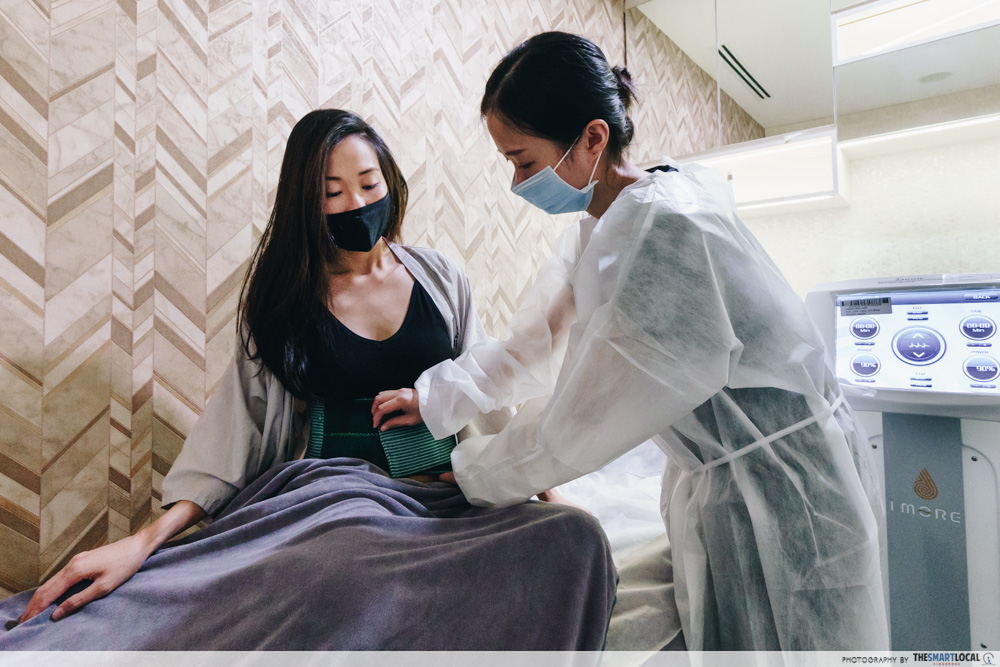 I was swiftly led to a treatment room and told to change into a robe. An elastic band similar to one of those postpartum belly cinchers was then secured around my waist and two defibrillators-looking paddles were placed on my lower abdomen. 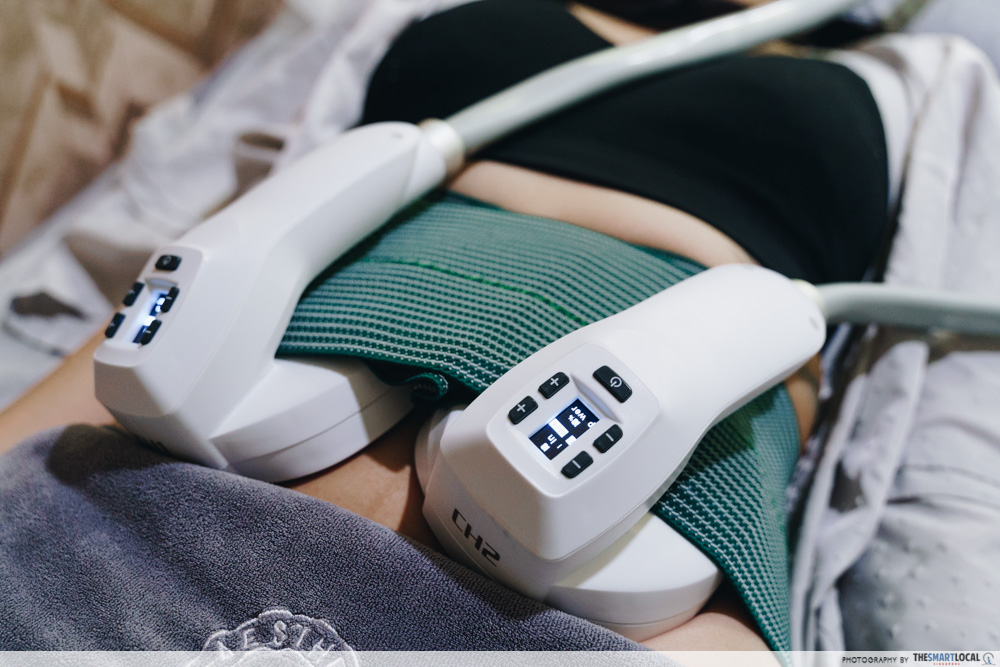 Initially, when I was told that the treatment would stimulate strong contractions, I shuddered. Having only given birth a short 7 weeks ago, I wasn’t ready to relive any sort of contractions. My aesthetician was quick to quell my fears letting me know these contractions would be in no way painful and feel similar to doing a couple of crunches.

And so it began. The first wave of pulsating contractions did catch me off guard, and the ticklish sensation had me clutching the blanket to stifle my laughter. It truly felt like an out-of-body experience where my muscles felt like they were speeding through an intense round of crunches while I lay stationary.

I soon grew accustomed to the tensing of muscles around my abdomen and the session was over before I even knew it. 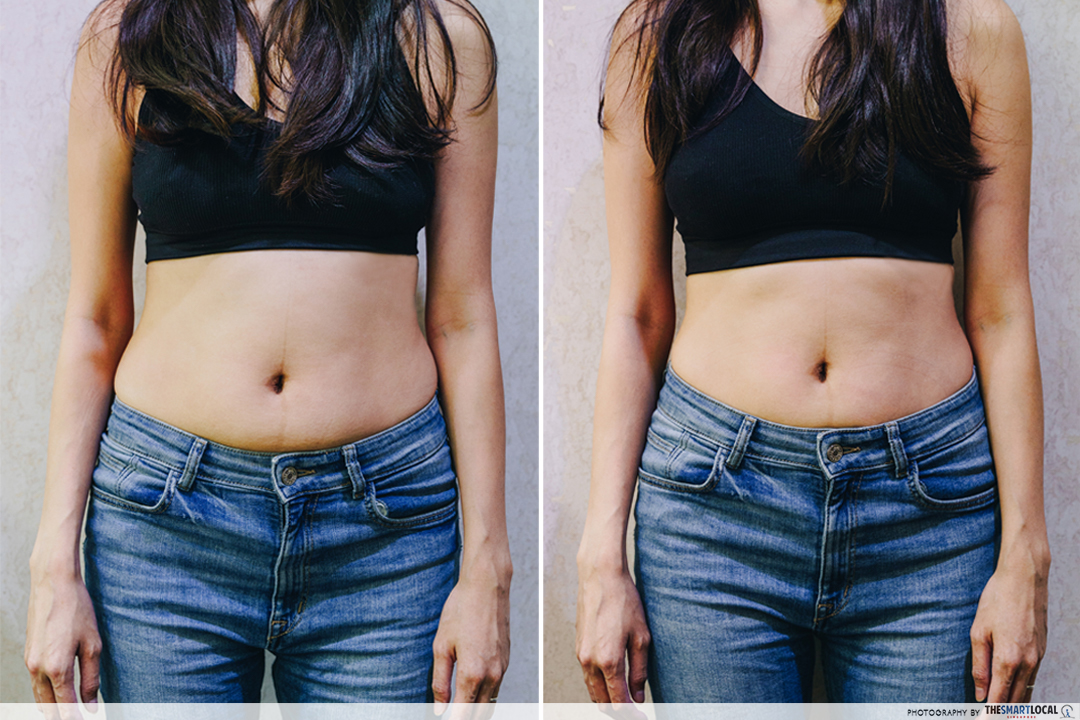 The machine may have given my lower abdominal muscles an exercise of a lifetime in those 30 minutes, but I was pleasantly surprised to find that I wasn’t rolling over in pain from muscle cramps once the treatment was over.

In fact, other than my belly being slightly warm from the paddles, I only felt a very slight soreness in my lower abdomen. And while that alone left me second guessing the effectiveness of the treatment, the before and after photos told a different story. 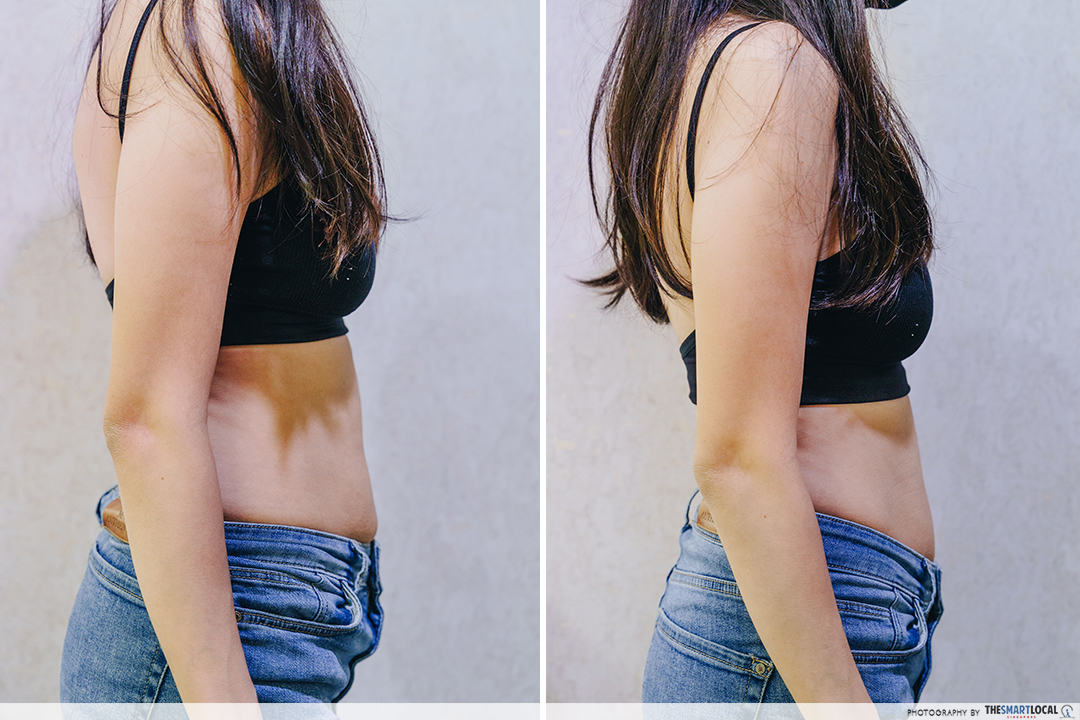 I was shocked to find that my midsection did indeed look “tighter” and my mom pooch had somehow shrunk and was no longer hanging over the front of my jeans.

Over the course of the next few days, my lower ab muscles continued to feel slightly sore but not quite as sore as they would have if I actually attempted to complete 100 crunches. A press-test while clenching also revealed a layer of muscles that were barely there before.

Toning up with the Emshape Body Sculpting treatment

It takes at least 4 sessions for the Emshape Body Sculpting treatment to be totally effective, but I was really pleased to see results after just the first one. A break of 2-3 days is recommended between sessions for your body to rest, meaning you can achieve the chiselled body of your dreams in as little as 2 weeks!

As a nursing mother with a toddler in tow, I also appreciated the 30-minute duration of the session because I usually don’t have much free time on my hands juggling work and motherhood. 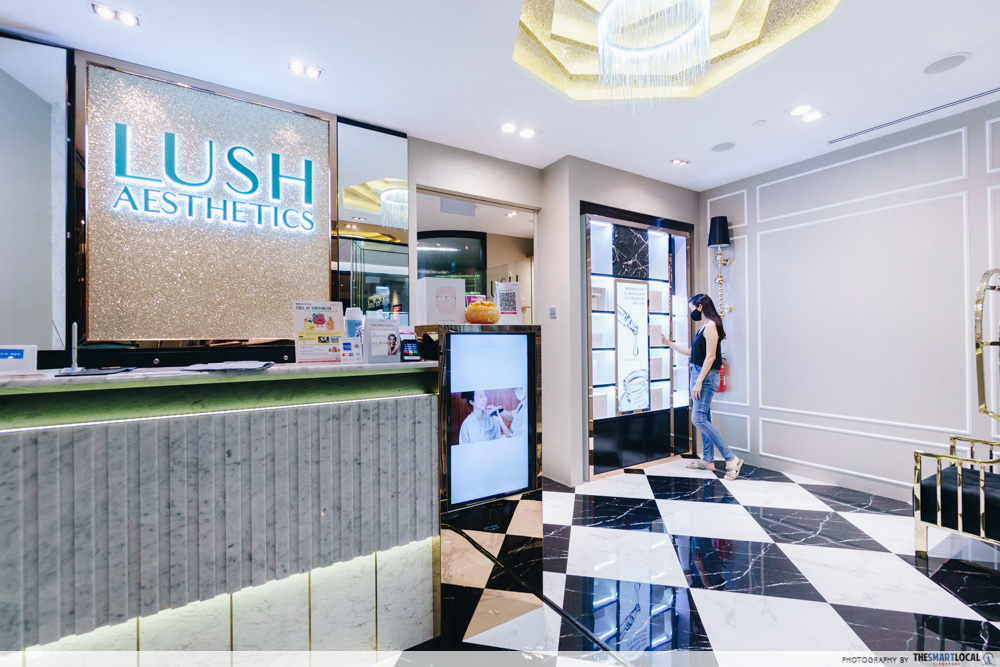 Seeing your body change during pregnancy can be hard on some, and not being able to bounce back into shape as quickly as you’d hoped is something that eats most new mothers up inside.

If you’re a newly minted mother looking to lose belly fat from pregnancy  without breaking a sweat, you can take comfort in the fact that 1 session is now priced at $374.50 nett for first-time customers, down from its usual price of $750*.

*Valid for 1 redemption per person with appointment. Not valid for tourists or in conjunction with other promotions. Results may vary between individuals.

This post was brought to you by LUSH Aesthetics.
Photography by  Tan Wen Lin. 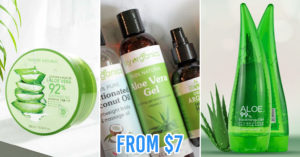 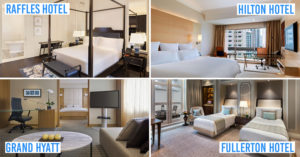