How I found inspiration from the ancient Vietnamese feudal clothing

In 2016, as a university student, I went a short-term cultural exchange to a university in Bangkok, Thailand. To present our culture, my professor, my friends, and I planned an áo dài show and went on to rehearse cat-walking in the front yard of our hotel. Not long after, a South Asian man curiously approached me, and commented:

“That is gorgeous. Are you from Vietnam?”
“Yes. You know áo dài?” I asked.
“How can I not know? They appear in every single American movie about Vietnam. By the way, I tell you this, your áo dài is very much similar to what I am wearing.”

He was wearing a punjabi suit, a colourful long tunic with trousers beneath. I couldn’t help myself from agreeing that his clothing and áo dài were very much similar. This comment was overheard by my professor who was standing nearby, triggering his pride as a Vietnamese. My professor got angry with the man and kept telling him the two kinds of clothing were thoroughly distinctive.

This conversation, though short, had me question about what made out clothing unique. Beyond that, I started to think about what kinds of traditional clothing we have apart from áo dài. It was that question that led me to the world of Vietnamese feudal clothing.

Vietnam doesn’t have only áo dài Vietnam has 53 official ethnic minorities, so it comes to no surprise that we have a wide range of traditional clothing than just áo dài. Thanks to being featured in literature, cinema, and other media, some ethnic traditional clothing has become quite well-known, such as the Hmong community’s clothing or the Chinese-Vietnamese cheongsam.

However, the more I read about Vietnamese clothing, the more I became aware of the lack of proper research into Vietnamese clothing in the past, particularly during the feudal dynasties. In fact, there were just a few books and projects focusing on this matter, not to mention that their information was not consistent with each other. You can also see this in the poor details of clothing in Vietnamese historical television dramas.

Then serendipitously, one day in 2017, I found the Facebook page of a project named Hoa văn Đại Việt, meaning The Patterns of Đại Việt. The project aimed at researching authentic Vietnamese patterns found in clothing and architecture and applying them to daily products such as notebooks or T-shirts. The project led to my deep interest into the identity of our country. For instance, dragon motifs on clothing during the 10th century, under the Lý dynasty, are more far snake-like and gentler than those after the 15th centuries, which are more fierce and intense due to Chinese influences.

I got my first piece of traditional clothing Thanks to Hoa văn Đại Việt, I got access to more revival projects, from Truyền thuyết Long Thần Tướng, meaning The Legend of the Holy Dragon Imperator, a historical graphic novel with accurate depictions of customs and clothing to many stores recreating and selling modernised feudal clothing.

As I learned more about the clothing, I became more proud of my own clothing culture – and even decided to buy myself a modernised áo tấc, a type of royal court clothing, for special occasions. 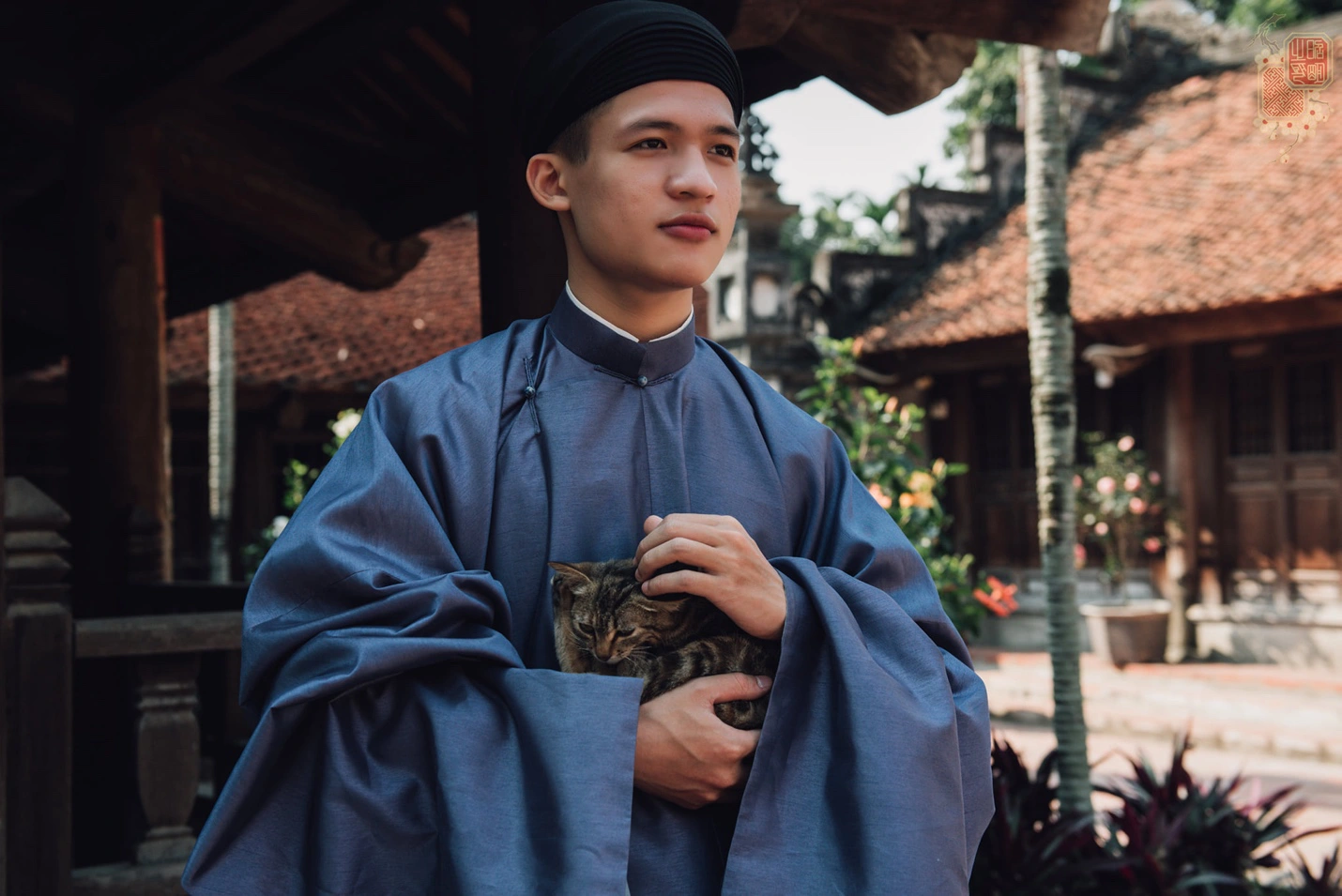 Though modernised, it still has distinctive features of the original clothing – long and loose sleeves, with a highlighted end near the wrist. On the front, you can see a embroidered colourful square to show the rank or class of the wearer.

An embarrassing moment that triggered me 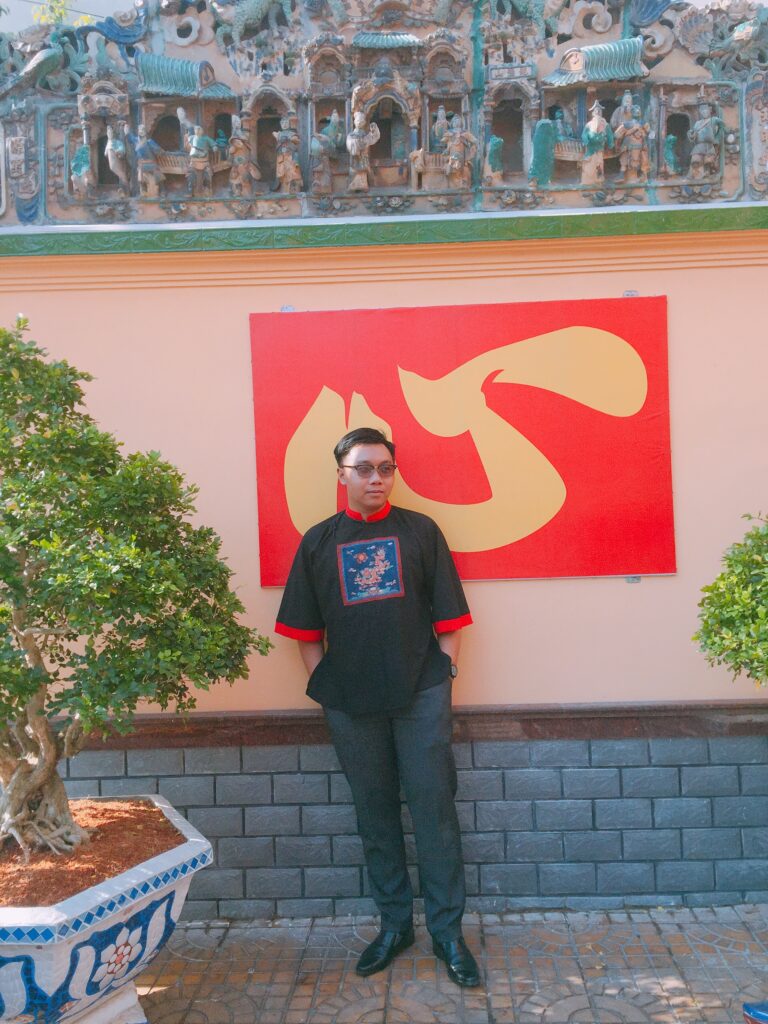 I brought my modernised áo tấc for a photoshoot. Then an embarrassing conversation happened.

On Tết 2020, I wore this áo tấc  with a friend for a photoshoot. In the colourful and delicate attire, I felt a great sense of honour and dignity. When we visited a Chinese-Vietnamese communal house, a woman approached us, asking:

“What kind of Chinese clothing is this? Ming-era or Manchu clothing? Is it Guangzhou-made?”

Suddenly, I was dumbfounded by this question. Unable to give her a satisfactory answer, I went back home, furious and embarrassed, and started to dig deeper into the field of Vietnamese feudal clothing.

Back to my study 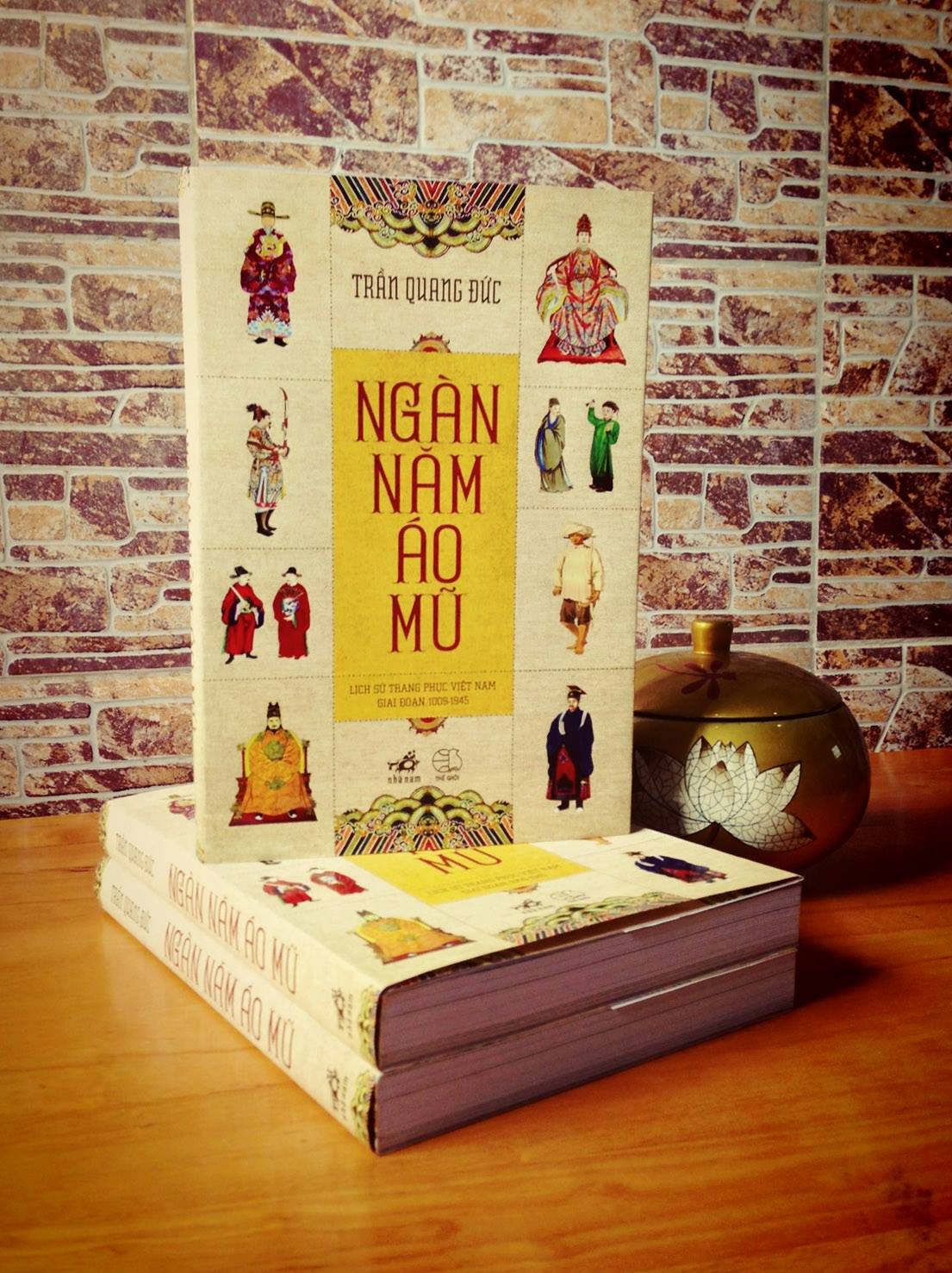 After that short conversation, I took feudal clothing more seriously and did more research into what made our feudal clothing Vietnamese. It was not long until I realised many revival projects, including Long Thần Tướng, shared the same sources of documents from independent researchers to accurately recreate clothing.

Among them, I found Ngàn năm áo mũ, literally A Thousand Years of Clothing, a book written by Trần Quang Đức, to be the most notable. Referencing the Ming Dynasty court attire, Nhật Bình has become an iconic piece of clothing of the women under the Nguyễn Dynasty.
Image credit: VnExpress

I spent two weeks reading the whole book and comparing the information in that book with other documents, illustrations, and recreated clothing. The deeper I studied, the more I realised how colourful and diverse Vietnamese feudal clothing was. 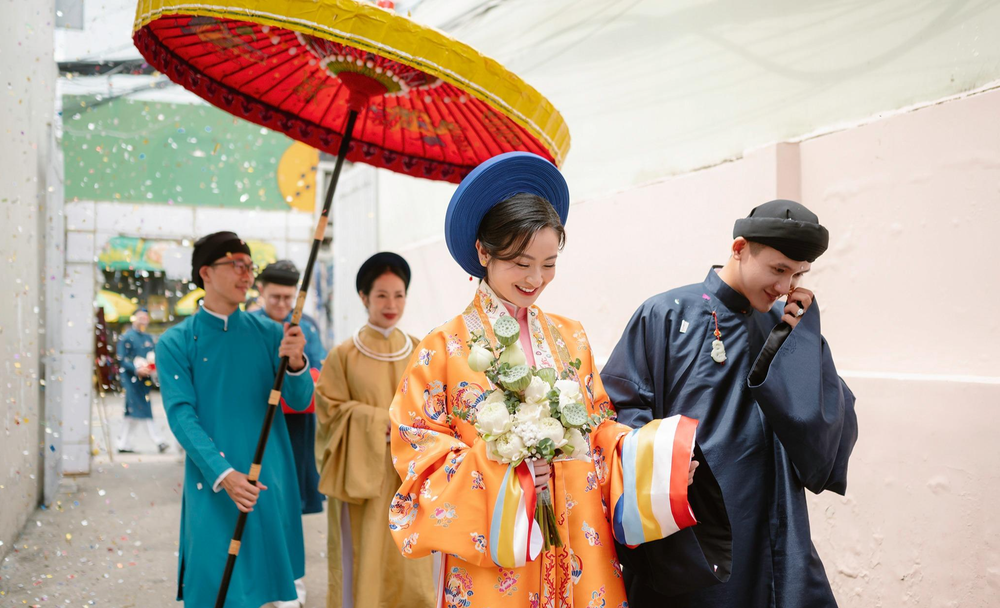 After the end of the Nguyễn Dynasty in 1945, Nhật Bình became a common choice for the bride’s gown. Today, the practice of wearing traditional feudal clothing in weddings are coming back.
Image credit: Tiền Phong

For examples, though the Vietnamese governments kept referencing Chinese court attire to make their own, the feudal clothing in our court had been modified to match our hot climate, with details simplified and local patterns added. Among male commoners, having short hair has also had a long-rooted tradition.

Bringing feudal clothing into the spotlight 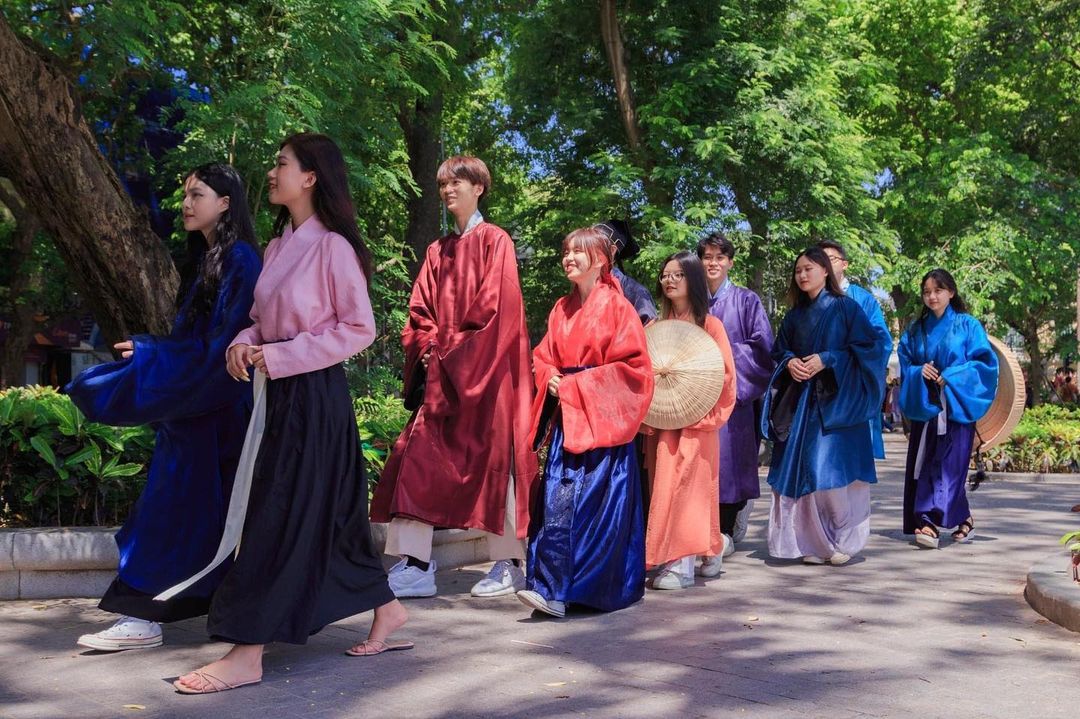 Fortunately, I was not the only person who got intrigued by Vietnamese feudal clothing. In fact, after my first encounter with Hoa văn Đại Việt, I learned that the number of projects aiming at recreating and advertising Vietnamese court clothing has soared impressively, from about five to dozens. Following the public rising interest into Vietnamese feudal clothing in particular and Vietnamese history, Phượng khấu, or 鳳釦 in Chinese, dubbed as The Emperor’s Gift in English, a historical drama series about the harem of the Emperor Thiệu Trị, the third Nguyễn emperor, was produced.

Despite the mixed reviews, the series became a role model for other media to depict the Nguyễn Dynasty more accurately on screen, especially the period’s clothing.

I hope to see more feudal clothing in daily life The art exhibition at the French Consulate in Hồ Chí Minh City. You can spot a man in green ngũ thân clothing in the picture.

For now, the revival of Vietnamese feudal clothing has developed longer than other short-term trends. For me, it is even more wonderful to think about the potential of bringing back these kinds of clothing in formal events as an alternative to western suit and tie.

This idea came around in 2020, when I visited a street art exhibition at the French Consulate at Hồ Chí Minh City. Apart from the impressive artworks, what intrigued me the most that day was a man in court clothing. Though he was the only person who dressed in that way, he walked around and conversed very comfortably with people around. I was so happy when reading the news that cultural officials in Huế started to wear ngũ thân dress, a type of feudal clothing, to work. They look much more honourable and, at the same time, friendly in this attire.

Let the legacy live on to conserve our identity

Though there are still a lot of things to do to make traditional clothing a normal part of daily life, looking at events like this made me realise we have made great progress in the area. The more I know about feudal clothing, the more I appreciate my identity as a Vietnamese.

As more and more people, particularly the younger generations, share the same thoughts as mine, we’ll keep wearing these kinds of clothing on many occasions, gradually making this practice a normal part of our lives.

If I met the people who asked me what made our traditional clothing different from those of other countries again, I can now confidently and proudly tell them the long history that led to our áo dài, pointing out the changes in fabrics, forms, and decorations that make our feudal clothing unique. 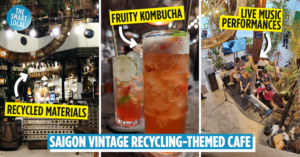