When it comes to the world of horror, I have to say it: Thailand knows it best. From spine-chilling myths and straight up spooky movies like Shutter, it’s hard to compete with the horror scene here.

But what’s the truth behind the ghouls we see in movies? If you’re curious about meeting them IRL, here’re 10 of the scariest Thai ghosts and where to find them – if you dare. 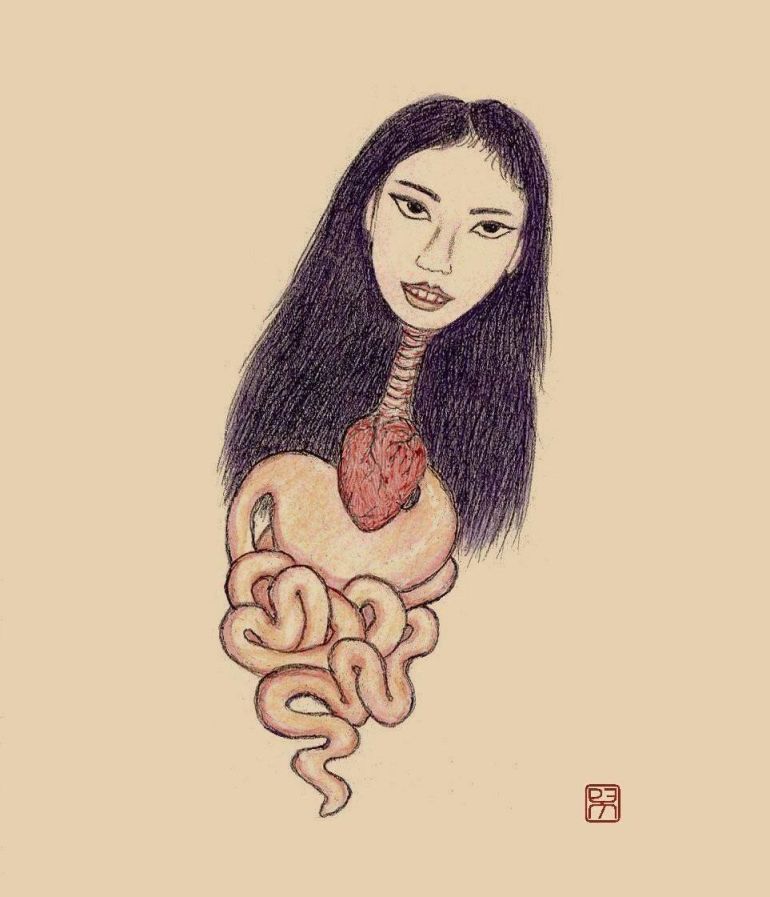 When I was a kid, my Malaysian mom used to tell me scary stories about disembodied heads floating around with nothing but entrails to scare the living crap out of, well, the living.

Turns out, Thailand has its own version of this terrifying spirit, and it’s called Krasue. In Thai folklore, it manifests itself as the head of a young female attached to internal organs like the heart, stomach and intestines. The cursed spirit is always hungry – and not for a plate of pad thai. Blood and raw flesh are its snacks of choice, and it preys on innocent animals and pregnant women before childbirth. After eating, it’s even known to clean itself using laundry that’s being hung to dry overnight.

Here’s how to kill it: destroy the hidden body of Krasue, to which it attaches itself in order to pose as a normal human in the day. If the head fails to find its body before dawn, it will “die” a painful death. Alternatively, the brave can opt to tackle Krasue head on and cut off its intestines. Villagers swear by bamboo thorns as their weapon of choice.

Scary factor: 7/10. Unless you’re a farm animal or preggers, you won’t need to worry about this pesky spirit. Terrifying to look at though. 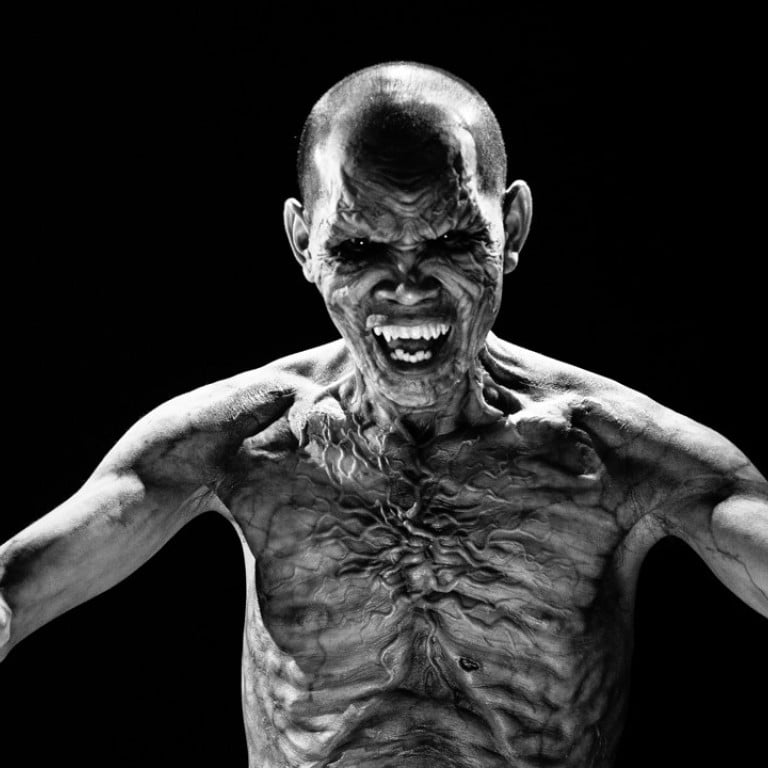 Zombies? Scary. Vampires? Scary. Now put the 2 together and you’ll get Pob – a zombie-vampire hybrid from the Northeastern region of Thailand.

Interestingly, the Isan town of Sakon Nakhon is said to be the home of the Phi Pob. Research showed that the history of the town dated back to the 1920s, when a 50-year-old man by the name of Tongkam Chaitaman moved there after he was accused of being a Pob. 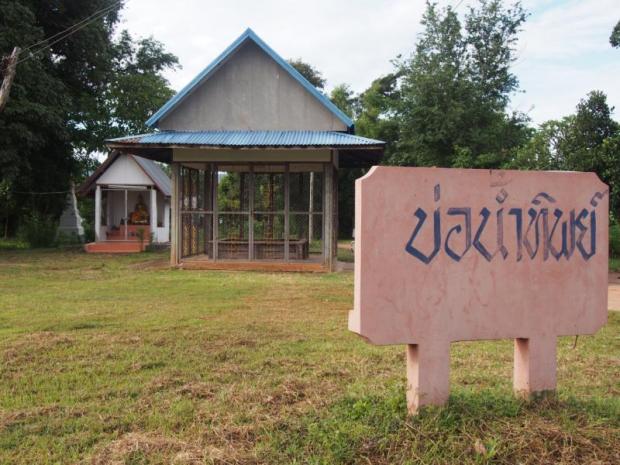 It is believed in Northeastern culture that people could bring bad luck to their communities if they were possessed by Pobs, which led to many leaving their villages to start a new life in other provinces. 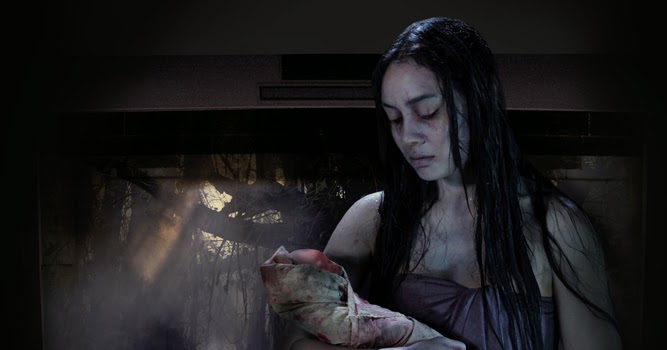 With ghost stories and horror movies inspired by Mae Nak, she is probably the most popular ghost in Thailand. Mae Nak, or Lady Nak, is said to have been a real person who lived during the reign of King Rama IV.

According to folklore, Nak was a beautiful lady who resided along Phra Khanong Canal with her husband Mak. While she was pregnant, Mak was drafted to war. Unfortunately due to an injury, Mak was unable to return home in time before his dear wife gave birth, and she ended up dying alongside her newborn child. 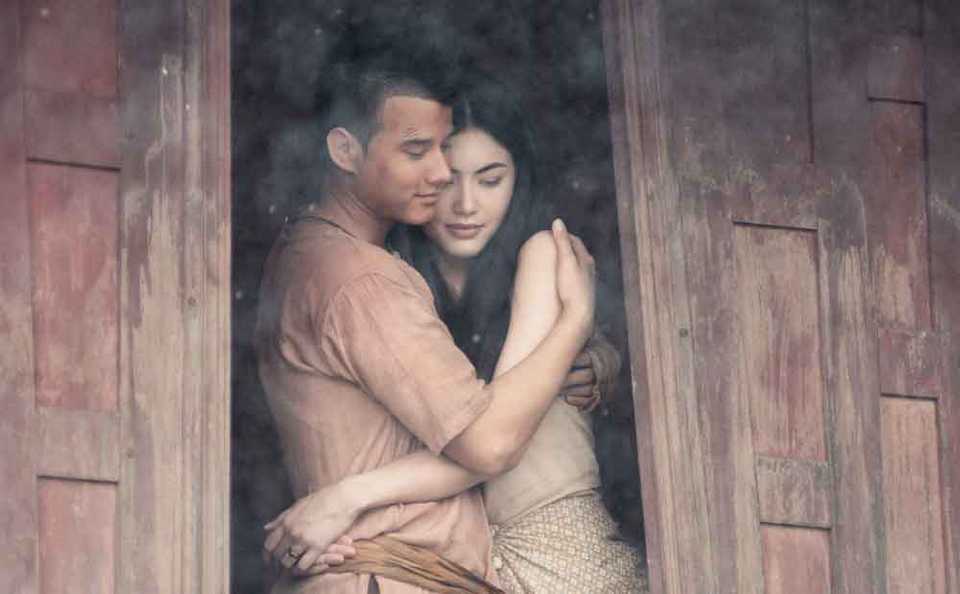 The story goes that when Mak finally returned home, he found Nak waiting for him eagerly with their child. Because he was unaware that the two of them were spirits, his neighbours tried their best to warn him and lure him away.

When Mak eventually realises that he’d been living with a ghost the entire time, he attempts to flee, which angers Nak who chases him down. She begins to terrorise the village for ruining their relationship, until she is finally exorcised and trapped in a jar that was thrown into the canal. 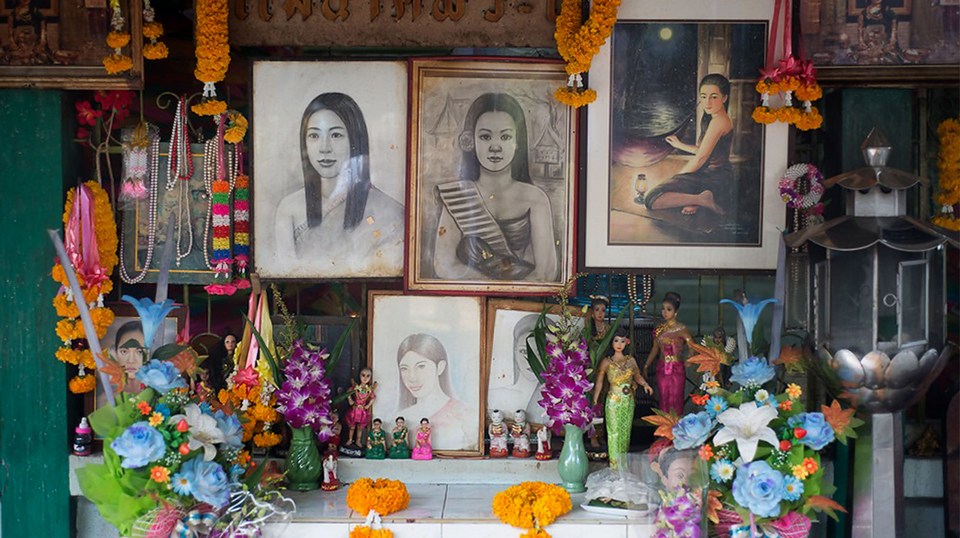 People pay respects to Mae Nak and  go to her for good luck in relationships
Image credit: Living + Nomads

Today, you can find a real shrine dedicated to Mae Nak in Bangkok’s Suang Luang District. Many empathise with the poor woman who simply wanted to reunite with her husband again.

Some say that a lady’s cries can be heard when at the canal at night, calling out to her true love to be with her again.

Dolls are scary as crap. I mean, we all know what happened with Annabelle.

Kuman Thong is far from the infamous pigtailed demonic rag doll – in fact, this little ghost is pretty revered in the country. Instead of being locked up in a museum of cursed artefacts, many Thais willingly keep Kuman Thong shrines at home and welcome these little boy spirits in hopes of business success and good fortune.

Image credit: Siam and Beyond

However, the history of Kuman Thong is not as rosy as the dolls’ cheeks may seem to be. Brace yourselves.

The creation of this spirit is done via some serious black magic, which involves witch doctors removing a stillborn fetus from the mother’s womb. The fetus is then taken to a cemetery, where it is dry-roasted while chants are performed to “invoke” the spirit. It is finally painted with ya lak, a special gold laquer, giving it the name Kuman Thong, which translates to ‘Golden Boy’.

You may hear the sounds of little kids playing or running around in houses with Kuman Thong
Image credit: Siam and Beyond

Those who choose to keep Kuman Thong must treat it as if it were a real child, keeping it happy with offerings and attention. If everything goes well, the owner will be rewarded with success. Otherwise, we’re not quite sure you’d want to stick around for the punishment.

What’s scarier than this spirit’s origins is that in 2012, a 28-year-old Briton was arrested in Bangkok after he was discovered with six male fetuses that were roasted and covered in gold. And he’s only one of the people that have gotten caught.

It’s horrific to think about the extent people would go for a little bit of luck.

The Krahang is a nocturnal male ghost that manifests as an unassuming villager who takes to the skies at night with the help of rice baskets as wings.

Sporting only a loin cloth, this skeevy spirit haunts mostly women and is blamed for attacks in many villages in Thailand.

In 2017, a girl in Buriram province claimed to have seen a Krahang spying on her while she was in the restroom. She described him as being large in stature with a “winged back”. Other villagers say that this spirit has glowing eyes – though in one case in Nakhon Ratchasima, what was thought to be a Krahang attacking women turned out to be a very human drug addict.

Leaning towards the monster side of the spectrum is the Phi Kong Koi, a one-legged jungle vampire that haunts forested areas in the Thai countryside. This goblin-like creature hops around on its single leg, shouting “Koi, Koi!”, giving it its name.

One netizen posted photos of a supposed Phi Kong Koi, which he had seen hopping around at a Thai countryside
Image credit: Yahoo

Some claim that the Phi Kong Koi has a tube-like mouth that sucks blood from sleeping travellers that are traversing through the jungles. Thus, locals warn those who wish to stay overnight to sleep with their legs crossed and feet covered. 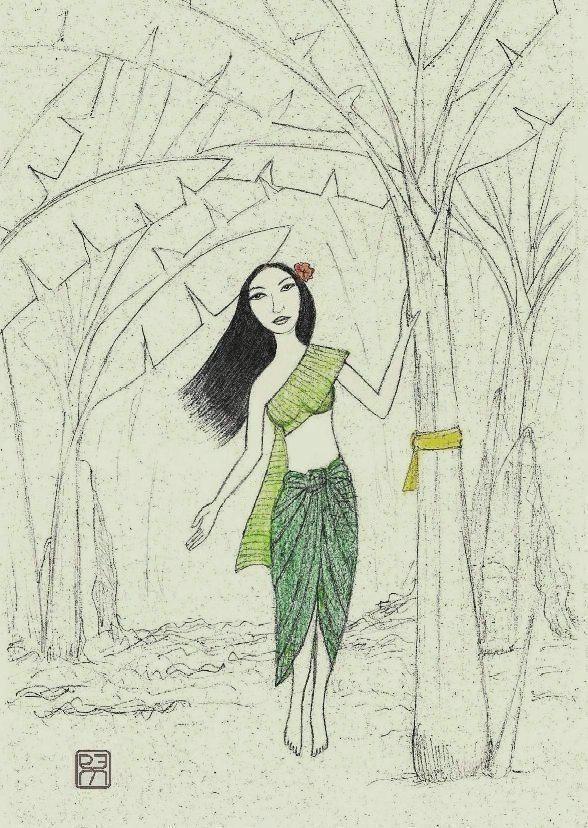 Banana trees seen as spiritual portals in many countries across Southeast Asia. In Thailand, Nang Tani is a female ghost that appears as a beautiful young woman in traditional Thai garb that resides in wild banana trees.

She can be viewed as a forest nymph of sorts – often invisible, she is said to appear on nights with a full moon, with her feet never touching the ground. Others say that she becomes visible when the tree flowers.

And while mostly benevolent, Nang Tani can harm men that have hurt women.

Clumps of wild banana trees wrapped in colourful fabric is a sign that you are in Nang Tani’s presence. Don’t eat the fruit from these trees as they are inedible.
Image credit: Thai Village 72

It isn’t uncommon to see people give offerings to show their respect for Nang Tani. If you’re out exploring, you just might stumble upon wild banana trees that are home to this spirit.

Pret (or Phi Preta) are hungry ghosts that are popular not just in Thai folklore, but other Asian religions like Hinduism and Buddhism as well.

These ghosts have the main trait of being reduced to extremely tall and gaunt figures to to extreme hunger, with needle-thin holes for mouths which prevent them from ingesting anything much. 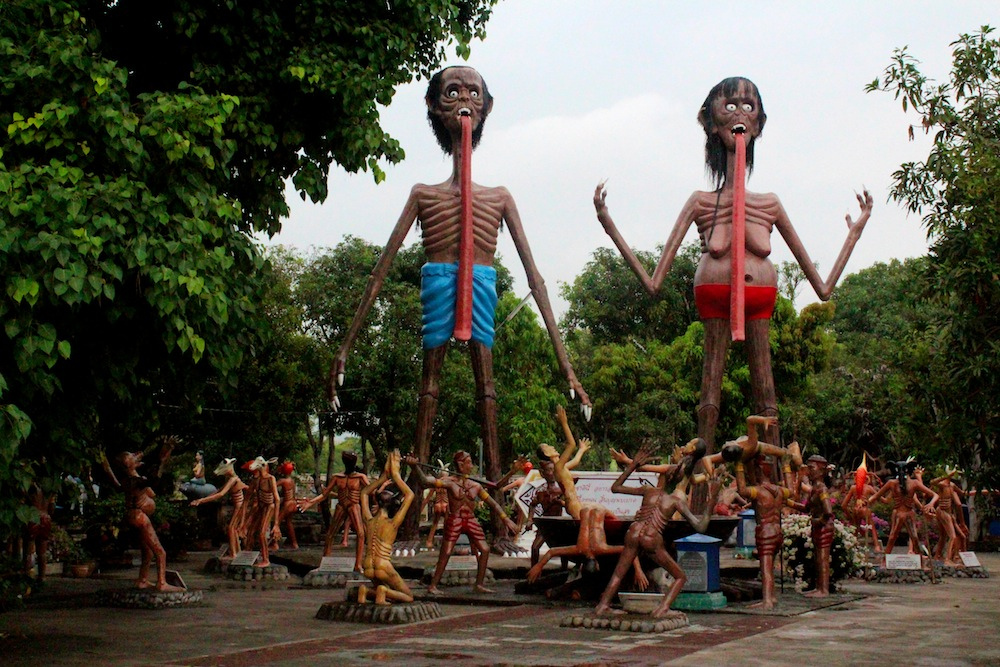 Pret are believed to be the ghosts of extremely corrupt and greedy people, who must face insatiable hunger as a form of karmic punishment.

Today, they are celebrated in Hungry Ghost Festivals which are popular in Southern Thailand.

Scary factor: 2/10. While daunting and hangry, they are relatively harmless to humans.

Not to be confused with the Pob, Phi Pop refers to a slightly more horrifying ghost thanks to one special trait: this one’s a cannibal. This entity is attracted to raw meat, and it can possess not just humans but also animals, then proceeding to kill its prey by devouring the body’s internal organs.

Phi Pop is still very much feared by many villagers in Thailand, and even in our neighbouring countries like Laos, who blame it for mysterious deaths in more rural regions.

The best way to tackle someone (or something) you worry may have been possessed by this ghost is via exorcism…which comes in the form of a dance. Sounds merry, though it’s anything but.

The vengeful spirit is one of the most common horror tropes, and that’s Phi Tai Hong for you. In Thai folklore, these ghosts are the restless souls of people that have died cruel or violent deaths, and often with no proper funeral rites.

In order for a person to be a Phi Tai Hong, they must have died an unexpected death – such as murder. As such, these spirits would have not been able to live a life they imagined having, spurring them to come back to avenge their deaths out of hurt and anger.

And if movies like Shutter have taught us anything, it’s that these spirits will not leave until they’ve settled their unfinished business. That means killing and torturing humans in the process.

In Thai culture, Phi Tai Hong is one of the most difficult ghosts to exorcise due to their violent nature.

And just when you thought things couldn’t get worse, the worst form of this spirit is when a woman dies during childbirth, resulting in two deaths instead of one. These ghosts are known as Tai Thang Klom and will stop at nothing to get justice.

Scary factor: 10/10. Have a protection amulet handy if you suspect you’ve got one of them on your tail.

Ghosts and spirits in Thai culture

Now that we’re better prepared to deal with the phis of Thailand, maybe we don’t have to be that afraid the next time something goes bump in the night.

Oh who are we kidding. Good luck!