South Korea has a reputation for producing spicy food, and most Koreans don’t break a sweat when it comes to spice. But those with a milder palate often fear that most of the menu will be too spicy for them, and that they will be left with very little choice.

Fret not, as we have put together a list of mild yet flavourful Korean delicacies that you can rely on to avoid having a flaming hot tongue. Bulgogi is made by marinating thin slices of meat, and it is one of the most popular and recognisable Korean dishes.

The marinade is sweet and savoury, and the grilled meat is infused with a smoky taste. Bulgogi is often enjoyed with rice and other side dishes such as kimchi, which can be spicy.

Bulgogi is usually made with beef if unspecified, but it can also be made with chicken or pork. Japchae is a savoury and slightly sweet dish of stir-fried glass noodles and vegetables, and it is the one of the most sought-after dishes during Korean festive holidays.

It is typically served as a side dish, but can also be served on a bed of rice (japchae-bap) as a main dish.

Fun fact: japchae was a noodle-less dish when it was first introduced in the 17th century, but it has since evolved into the modern version we’re familiar with. Gyeran-jjim is a savoury egg custard dish that is smooth and silky, and it is a popular side dish both at home and in restaurants.

In Korea, many restaurants that specialise in spicy food usually have gyeran-jjim on the menu as it helps to mellow the spice in food. If you are a chilli-avoidant soul, this classic dish is a must-try to extinguish the fire in your mouth.

Gyeran-jjim is rather easy to whip up at home, and you can check out this tutorial here: 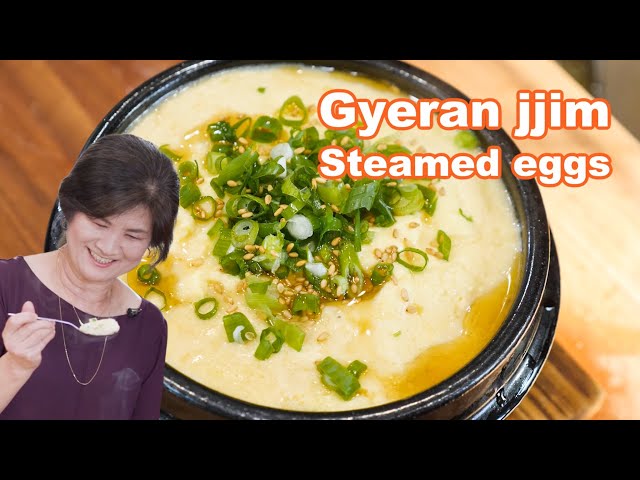 Seolleongtang is a stew made by boiling down ox leg bones for several hours, until the broth becomes rich and milky.

This stew is a staple in many Korean households, especially during the cold winter months.

Rice and noodles can also be added directly into the soup for a hearty and satisfying meal. Donkatsu is a Korean twist on the Japanese tonkatsu, which is a breaded, deep-fried pork cutlet.

While the Japanese version is thicker and smaller, the Korean donkatsu is thinner and bigger, allowing a larger surface area to be breaded and deep-fried.

It is typically accompanied by rice, kimchi, a light salad, and pickled yellow radish.

This dish is affordable and delicious, and can be commonly found at rest stops and cafeterias. Doenjang-jjigae is a Korean stew made with fermented soybean paste. While the word “fermented” may sound off-putting for some, this dish is actually more delicious than it sounds.

Doenjang-jjang is a staple “comfort food” for many Koreans as many grew up eating this stew. There are many variations of this dish, and it is typically made with pork, beef, or seafood.

In restaurants, the soybean stew is often one of the cheapest items on the menu – it’s a good choice if you want to save money on food without being utterly miserable. Similar to the Japanese sushi, kimbap is the Korean take on seaweed rice rolls.

It is the perfect meal on-the-go and a common sight at bus stations and convenience stores.

Kimbap is usually made with tuna, avocado, chicken, shrimp, and bulgogi, but they can be made with many other ingredients – the only limit for kimbap fillings is your imagination! Jajangmyeon is a classic dish of chewy noodles topped with a generous blanket of sweet and savoury black bean sauce. It is often served with a fried or hard-boiled egg on top, with peas as garnish.

This dish is a huge part of Korean culture, and can often be sighted in Korean dramas as it is a popular delivery food in Korea.

Jajangmyeon has become a symbolic dish that single people eat with their friends on Black Day – 14th April – to commiserate over their shared singlehood.

In less depressing customs, jajangmyeon is often eaten when you first move into a new place. You can read more about the custom in our article on traditional Korean dishes. Usually paired with jajangmyeon, tangsuyuk is a Korean-Chinese dish made with crunchy pieces of fried pork coated in a sweet and sour sauce.

It is often garnished with colourful fruits and vegetables like bell peppers, carrots and pineapples.

Tangsuyuk is usually made with pork, but it can also be made with chicken or beef. Kalguksu is a light and refreshing noodle soup made with wheat flour noodles. These noodles are often handmade and cut into a thin, flat shape with a knife.

There are many variations involving different ingredients for the soup base or the dough, but it is most often made with a rich chicken broth.

The noodles are known for their chewy and satisfying texture, and it is perfect for a cold wintery day as they will warm your tummy and soul. Eomuk-guk is a Korean fish cake soup. Fish cakes are served on a skewer and simmered in anchovy stock.

The fish cakes are made by deep-frying fish paste and other ingredients such as potato starch, and it is a popular snack to eat while drinking.

Eomuk-guk is also a popular street food as it’s easy to eat on the go, and it’s loved by people of all ages. Naengmyeon is a Korean noodle dish made of long and thin buckwheat and sweet potato noodles. The cold broth is tangy and savoury, and the noodles are soft and chewy at the same time.

Don’t be surprised if you find ice cubes in your soup – this dish is meant to be eaten cold, and it’s perfect for a hot summer day.

Naengmyeon can be confused with bibim-naengmyeon. The latter is a spicy, brothless dish, so be sure to check before ordering.

For those who aren’t fans of food that pack heat, these non-spicy Korean foods will spare you from tear-filled eyes and burning tongues.

The next time you visit Korea, do give these non-spicy Korean foods a try as flavour is certainly not compromised even when chili isn’t involved.