Food is an important part of a country’s culture because it plays a large role in forming cultural identity. When we think of Korean food, we think of delicious dishes such as bibimbap, samgyeopsal, and kimchi-jjigae.

But Korea also has certain dishes that may make non-Koreans feel a little queasy. Here are 8 weird Korean foods that you should try, though they may look odd on the outside. Kkomjangeo is a type of carnivorous hagfish that resembles an eel. It lives on the seabed and eats dead sea creatures.

The kkomjangeo is known to be very slimy because the fish secretes slime when provoked. The slime may seem off-putting, but it is actually nutritious and can be used as as a substitute for egg whites. Those who feel uncomfortable watching hagfish squirm to their death on a grill can look for restaurants that serve cooked kkomjangeo, or perhaps request to have them cooked in the kitchen before serving. After the kkomjangeo is grilled, it is usually mixed with a spicy red sauce. Alternatively, you can eat it straight off the grill after sprinkling some salt.

Kkomjangeo is not commonly available outside of Korea. But in Korea, you can find this dish in several BBQ restaurants. Some places, such as the Gongpyeongdong Kkomjangeo restaurant in Seoul, even specialise in kkomjangeo. At first glance, this looks no different from regular Korean soybean stew, doenjang-jjigae. But if you were to encounter this dish in real life, your nose will tell you otherwise.

Cheonggukjang-jjigae is a stew that is made with cheonggukjang (fermented soybean paste). Other her ingredients include tofu, chilli peppers, and gochujang. People commonly associate the smell of the stew with wet socks, and it is unkindly dubbed the “stinky soup”.

Cheonggukjang-jjigae is also called “dead body soup” because legend has it that a few German students called the police to report a potential murder in their dorm. As it turned out, the rotting smell came from the cheonggukjang-jjigae a group of Korean students were cooking. This allegedly happened in Germany, but there aren’t any sources to prove that it happened.

As the story spread, the stew gained the nickname “dead body soup”. Cheonggukjang-jjigae is often eaten with rice and side dishes.

The stew can be found in many restaurants in Korea. Jinju Cheonggukjang is a restaurant in Seoul that is famous for cheonggukjang-jjigae. Beondegi is a popular Korean street snack – you can find roasted silkworm larvae easily in Korea.

It looks disgusting, especially to people who hate or fear bugs. However, there are many who actually love this snack.

It is crunchy on the outside and soft on the inside. Biting into it makes a soft popping sound. Beondegi can be steamed and eaten as a side dish. It can also be boiled and served in soup. Koreans like to pair beondegi soup with soju.

Beondegi is so popular that you can even buy it in cans and cook them at home. 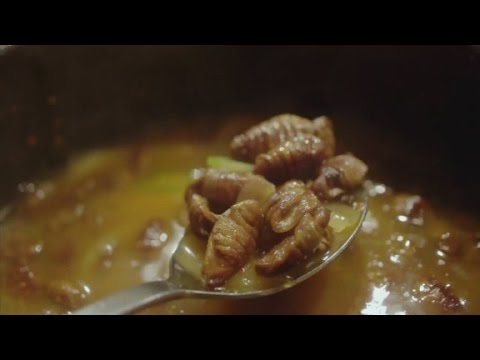 You may have heard of the popular Korean delicacy sannakji (live raw octopus). Ggolddugi is similar – it’s a baby squid sashimi dish. But the baby squid isn’t eaten alive, so you don’t have to worry about tentacles crawling out of your mouth or into your throat.

That said, the jelly-like, translucent squid with bulging eyes can be unappealing to some. Ggolddugi is often eaten as a side dish. You can dip it into any sauce you like, for extra flavour. Not everyone is comfortable with eating raw food. You can choose to boil the baby squid with ramyeon to make a satisfying bowl of seafood ramyeon. Gaebul, also known as the “penis fish” because of its phallic shape, is a delicacy widely enjoyed by locals.

The long and thick spoon worms have to be sliced so that it’s easier to eat. It’s often consumed raw, and you can still feel it wriggling in your mouth as you chew. Gaebul has a chewy texture and can be difficult to swallow. The gaebul is usually salted or dipped in gochujang and sesame oil because it tastes bland without seasoning.

To taste the freshest gaebul, head to seafood markets like the Noryangjin Fisheries Wholesale Market in Seoul, where you can eat gaebul straight from the tanks. Think sashimi, but extremely smelly. The hongeo-hoe is so stinky that even locals can’t stand the smell of it.

Skates “urinate” by excreting uric acid from its skin. This uric acid isn’t removed before fermenting, which means the skates are essentially being fermented in their own urine. The high ammonia content causes a tingling feeling in your mouth when you eat hongeo-hoe. Hongeo-hoe is typically eaten with bossam (boiled spiced pork wrap) and kimchi. This trio is known as the samhap, which means “the gathering of three”.

The smell of the fish is so strong that you will leave the restaurant smelling like waste, so make sure to prepare some mints and deodorant before you eat hongeo-hoe.

Mokpo, a city in South Jeolla, is famous for its hongeo-hoe. If you plan to visit Mokpo and don’t mind the smell, drop by any hongeo-hoe stall to try it out. Chueo-tang is a soup made with mudfish, also known as loaches. Out of all the dishes on this list, the chueo-tang is the most “normal”.

Other ingredients such as chilli, soybean paste, and ginger are also added in the soup.

This dish can be found in Seoul, but it’s more well-known in Namwon. The soup is more palatable when the mudfish is grinded into smaller pieces, because the loaches are less obvious to the eye. There is also no need to chew on them. However, some do enjoy eating it whole. The mudfish can also be coated in batter and deep-fried to become crunchy finger food. The bones are edible and usually don’t have to be removed, so you do need to chew carefully.

It’s easier to find this dish in Namwon, where it’s popular. But if you are not planning to visit Namwon, you can find Namwon-style chueo-tang in Seoul at Namwon Chueotang. Jukkumi, which means “webfoot octopus”, is an octopus dish that may seem unpalatable to some.

The webfoot octopuses are harvested during the pre-spawning phase, which occurs from late winter to early spring. Therefore, locals often have this dish during the spring season.

Webfoot octopuses taste best when they are cooked during the pre-spawning phase. Also, cooking them during that phase means that you can eat the octopus eggs as well. The eggs are white in colour and resemble cooked rice.

The egg sacs of webfoot octopuses are located in the head. When you cut open the head, you will find the egg sac, ink sac and brain – this is what got jukkumi onto this list of weird Korean foods. Webfoot octopuses are often cooked in a stew or stir-fried. If you would like to try this dish in Korea, you can consider visiting Samo Jjukkumi. Located in Seoul, Samo Jukkumi serves both the stew and stir-fried versions of jukkumi.

Live octopuses (sannakji) and raw crabs (gejang) are just the tip of the iceberg when it comes to weird Korean foods. But though we call them “weird”, these dishes are actually delicious and nutritious.

The next time you visit Korea, do give these dishes a try, even if it’s just for the experience. Jirisan Review: A Mystery About Rangers Rescuing Missing Hikers
10 Jung Hae-in Facts That Will Make You Understand Why We Are Whipped For This...