A new year calls for a fresh list of Korean dramas to binge on – 2022 is already looking to be an exciting year with the release of big budget series, as well as the return of familiar faces. Here are 20 new Korean dramas in 2022 you shouldn’t miss out on. Cha Young-min and Go Seung-tak are both doctors, but their personalities are complete opposites, to say the least.

Young-min is a competent and brilliant doctor, while Seung-tak is less than adept at surgery. However, he comes from an affluent and reputable family.

Despite his extraordinary skills, Young-min is indifferent to his patients and has little regard for them outside of the operating room. One day, he encounters an inexplicable incident that causes his spirit to possess Seung-tak’s body.

You can read more about medical Korean dramas here. 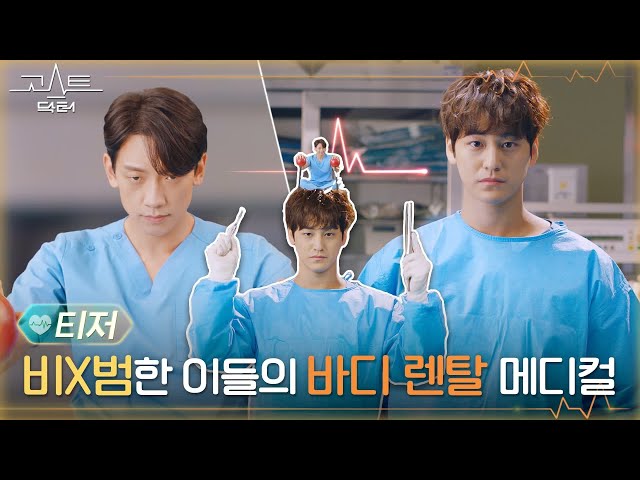 However, his clinic is now on the verge of collapse as he barely has patients to keep it running. The clinic is not the only matter that is troubling Won-jang as he also has to deal with hair loss.

Through the Darkness was adapted from the non-fiction book of the same name, written by South Korea’s first criminal profiler Kwon Il-yong.

Song Ha-young is a criminal profiler and his main job is to work with detectives, criminals, and even victims to create a psychological profile of suspects. In order to create the most accurate profile, Ha-young has to put himself in the shoes of a criminal and think from various angles.

However, Ha-young’s competence as a profiler is challenged when he meets serial killers whose intentions are difficult to decipher, and whose minds are nearly impossible to read. On the surface, Noh Go-jin and Lee Shin-ah appear to lead ordinary lives. However, Go-jin receives a warning that he will be murdered, whereas Shin-ah finds out that her days are numbered.

Go-jin is intelligent and independent, and he has a successful career as a math instructor. After the news that he will lose his life soon, he lives in fear.

Shin-ah works closely with Go-jin as his secretary. Although she is a private and reserved person, she does everything to the best of her ability.

The plot deepens when Shin-ah decides to masquerade as Go-jin’s fiancée while he pretends to suffer from memory loss to avoid getting killed. Han Yi-han is a doctor-turned-lawyer after his medical license got revoked. He used to be a brilliant surgeon, but his reputation goes down the drain when a patient dies on his operating table.

Four years have passed, and Yi-han is now a lawyer who defends victims of medical malpractice. More importantly, he works towards shedding light on the truth behind his patient’s death. Yi-han works alongside a public prosecutor who is a family member of the patient who died on Yi-han’s table. Oh Soo-jae is a driven and ambitious lawyer who works at one of the best law firms in Korea. Her life is smooth sailing until an unfortunate incident causes her to be demoted from working as a lawyer at a law firm to being a professor at a law school.

She meets Gong-chan for the second time while teaching at the law school. Their first encounter was when Soo-jae accused him of a crime he didn’t commit, which resulted in Gong-chan serving time behind bars.

Despite his turbulent past, Gong-chan remains positive and warm-hearted to the people around him. As time goes by, he catches feelings for Soo-jae. Through their relationship, Soo-jae learns what it means to truly love herself, and thanks to Gong-chan, her direction in life begins to shift. Adapted from a Korean webtoon titled Now At Our School, this horror series takes place in a high school following the outbreak of a zombie virus.

As the virus begins to spread within the school compound, a group of high school students are confined to their school with no way out. They have no choice but to fight the virus and overcome their fear in order to survive. Park Chang-ho is an inept lawyer who has a low probability of winning in trials. Many of his colleagues call him “Big Mouth” as he is the talker of the group.

One day, Chang-ho comes across past records of bottom-tier lawyers. As he browses through the documents, he learns about the harsh legal battles fought between inferior lawyers and those with influence and affluence.

The story becomes complicated when Chang-ho is falsely arrested for being a con artist. Mi-ho, who is Chang-ho’s wife, fights alongside her husband to shed light on the truth and prove his innocence.

You can check out more intense law dramas here. Han Sun-woo and Seo Eun-soo have been best friends for two decades. One day, they decide to live together for two weeks to confirm their feelings for each other.

Both protagonists have artistic abilities – Sun-woo works as a photographer, while Eun-soo earns a living as a lyricist. Although they have been friends for a long time, their personalities are opposites. Sun-woo is gentle and introverted, whereas Eun-soo is direct and expressive.

The Murderer’s Shopping List is adapted from the novel of the same name.

Ahn Dae-sung works as a cashier in his neighbourhood. At first blush, he seems like an ordinary person. But his observation skills are outstanding, and he has a great memory that captures even the most trivial of details.

As we follow Dae-sung, we will get to learn more about a range of criminal issues that continue to affect some dilapidated neighbourhoods in Korea. Examples include stalking and child abuse. Both Do Bae-man and Cha Woo-in are military prosecutors, but they are driven by different purposes. Bae-man becomes a military prosecutor as he believes that his job will bring him success and financial stability. In contrast, Woo-in is in it for revenge.

Despite their differences, Bae-man and Woo-in work hand-in-hand to go against corruption in the military. As they embark on a challenging journey, they grow and groom each other for the better.

12. The Youngest Son Of A Conglomerate The Youngest Son Of A Conglomerate is based on the web novel of the same name.

Jin Do-joon is driven by only one purpose in life – to seek revenge. After he is falsely branded as the culprit of embezzlement by a wealthy family, he does everything he can to seek vengeance.

Unfortunately, his plan to destroy the family comes to a halt when he gets murdered by them. Yet, this is only the beginning as Do-joon is reincarnated as the youngest son of the affluent family, giving him another chance to exact his revenge. Money Heist: Korea – Joint Economic Area is a remake of the Spanish crime drama of the same name, and it follows a similar plot and character development.

“The Professor” is a genius criminal mastermind who is highly skilled in planning and scheming. He strategically plans to carry out a heist in South Korea with the help of his fellow brainy friends.

However, their plan is not as plain sailing as they had hoped would be – they end up encountering strange and unexpected situations while executing the heist. Na Hee-do is a passionate professional fencing athlete. Although she is the ace in her team, things are not always in her favour – her high school fencing team collapses following the IMF financial crisis.

Baek Yi-jin’s family is severely affected by the financial crisis. Yi-jin’s main job is a reporter, but he is always on the grind as he concurrently works several part-time jobs to make a living for his family.

Through times of pain and suffering, but also friendship and love, Hee-do and Yi-jin grow together and create many memories in their youth. Shin Ha-ri is an ordinary working adult who has a crush on her now-attached friend.

Beaten by the news of her crush getting attached, she meets another friend, Young-seo, in hopes of feeling better. Young-seo is the daughter of a chaebol (large conglomerate run by a family), and she was asked to go on a blind date. Reluctant to go, she asks Ha-ri to go in her place by offering her some money.

At last, Ha-ri agrees to help Young-seo out. It turns out that the CEO of her company, Kang Tae-mu, is her blind date. Although she knows Tae-mu, he doesn’t know her since she’s just one of the many employees in his company.

Tae-mu’s life revolves around his work, and his grandfather is adamant on finding the right one for him. Since dating and marriage are the least of Tae-mu’s concerns, he agrees to go on the blind date with the thought of marrying whoever he meets.

However, the story gets complicated as Ha-ri has to keep up her identity as Young-seo. To make matters worse, Tae-mu asks Ha-ri to marry him following their blind date. Rex, a matchmaking agency catered to the elites, becomes well-known in a society driven by greed and desire. People who are desperate to join the upper echelons contact the agency in hopes of marrying – or remarrying – those with power, reputation, and money.

In particular, they all eye the “Black” tier, the top category that only accepts 0.001% of the entire South Korean population. Sung Yoon-oh works as an architectural designer, and he is well-liked by those around him. Som is a developer for a social networking app called “Somebody”. She is introverted and rarely speaks her mind, but she is adept at her job.

Ki-eun is Som’s best friend and a police officer. After the social networking app becomes intertwined with a murder case, Ki-eun begins to investigate the mysterious incident with the help of her friend, Mok-won.

Som, Ki-eun, and Mok-won find Yoon-oh to be an attractive and charismatic person, but they begin to notice that he is hiding something from them. Kim Yo-han is a judicial apprentice who goes undercover to carry out an investigation. Although he successfully masks his true identity with his poker face, he encounters an unexpected incident that puts him behind bars.

Despite the challenges, Yo-han tries to seize every opportunity. His quick-witted nature comes in handy in times of a crisis, but his fate remains unknown. Many find it difficult to approach Shim Eun-seok as she is a hostile and surly judge. She hates dealing with juvenile delinquents, but to her dismay, she is appointed to the juvenile court.

She creates and applies her own set of rules to punish the juvenile criminals, but soon, she begins to learn about reconciliation, healing, and growing up. Island is adapted from a Korean webtoon of the same name.

Won Mi-ho comes from a wealthy family that runs a large and lucrative business. After she makes a terrible blunder, her angered father sends her to live on Jeju Island, where she finds work as a high school teacher.

She meets John, a priest, and Van on Jeju Island. Prior to moving, she had no clue that the island was brimming with evil spirits. Now, she is aware that the country is in peril, and she teams up with Van and John to fight against all evil.

Korean dramas you shouldn’t miss in 2022

2021 was an epoch-making year for K-drama fans with the release of several breakout series, including Squid Game, Hellbound, My Name, and Hometown Cha-Cha-Cha. We can’t help but look forward to an even better year!

While you wait for the airing dates of new Korean dramas in 2022 to be confirmed, check out 8 Korean dramas that were released in December 2021. Midopa Coffee House: A Retro Cafe In Seoul That Allows You To Time Travel To The 80s
Starbucks Gyeongju Daereungwon: A Hanok-Style Cafe With Exclusive Merchandise