On 19th October 2020, LEESLE released their much-anticipated KARD X LEESLE modern hanbok collaboration and we couldn’t help but marvel at its beautiful designs. The collaboration saw LEESLE shifting away from their usual minimalist style to take on a dramatic look – perfect for the KARD members who are known for their bold and unique personalities. The KARD X LEESLE collaboration is part of the “CAST” (Connect, Accompany to Make Synergy and Transformation) project run by the Ministry of Culture, Sports and Tourism in South Korea. The ministry supports the planning and development of collaborative content associated with the Korean Wave (Hallyu). There’s no question why LEESLE chose KARD for their latest collaboration, considering the band’s global popularity and large international fanbase.

The KARD members modelled 2 different modern hanbok concepts – Hidden Moon and Street. Both are equally eye-catching as they showcase the beauty of modern hanboks to the world. Hidden Moon is a concept inspired by KARD’s Red Moon album (2020) and the band’s fanclub name, “Hidden KARD”. The combination of black and red asserts a fierce yet refined look. Pieces under this theme were designed to be subtly sexy while encompassing the traditional modest beauty of hanboks. Korean Street, the 2nd concept, pairs Korean street fashion aesthetics with the traditional hanbok. Modern materials such as leather and nylon were used to bring out the edginess of 21st century street style. BM is seen donning the Dragon Gilded Anorak (USD249), a waterproof jacket emblazoned with golden dragon motifs reminiscent of hongryongpo – clothes that a king wore on a daily basis. The Daeran Maxi Wrap Around Skirt (Black) (USD189) allows one to look sexy without exposing too much skin. You can style it like Jiwoo (right) and pair it with shorts or pants to add dimension to the modern hanbok style. 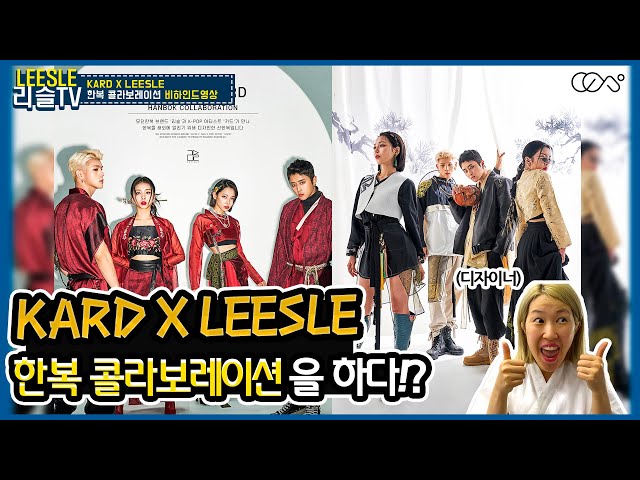 The modern hanbok pieces and accessories from the KARD X LEESLE collaboration can be purchased on LEESLE’s official website. The brand offers international shipping.

Fans were involved in the creation of the collaboration every step of the way, from initial design to release. Prior to the release of the final collection, fans were invited to vote for 2 of their favourites out of 4 themes – Hidden Moon, Enjoy the world, Korean Street, and Freedom. From 23th to 25th October, LEESLE held a cup holder event where fans could receive limited-edition photocards of the KARD members dressed in modern hanboks. Fans also had the opportunity to try on the actual outfits that the KARD members wore, and purchase items from the new collection at a discount. LEESLE is a fashion company known for their minimalist modern hanbok designs. Leesle Hwang, the founder of LEESLE, believes in the value of bridging the past and present and does so by reintroducing the traditional hanbok with a modern twist. Since its inception in 2014, the brand has not only received widespread attention from media outlets such as Vogue, but also from Korean celebrities. BTS’ Jimin, SHINee’s Taemin, actress Jo Bo-ah, and singer Lai Kuan-lin were a few of the many who were spotted wearing LEESLE’s modern hanbok pieces. LEESLE releases new collections twice a year with themes that keep up with the latest Korean fashion trends.

Through K-pop idols, clothing brands, and Korean dramas, the popularity of modern hanboks has steadily risen, planting the appeal of Korea’s traditional garments in the hearts of many. With the rise of the newtro trend and an increasing appreciation for traditional Korean culture, there’s no doubt that modern hanboks will continue to stay in trend.

Check out other K-culture related articles: New Samcheong Baskin Robbins Store In A Hanok Brings Newtro Flavours To You For The Ultimate Nostalgia Trip
Gamcheon Culture Village Guide - 22 Things To Do Besides Taking Photos With The Little...