If you’re a BLINK who is interested in understanding what your faves are saying without having to wait for subtitled videos, rejoice as HYBE has collaborated with YG to release Blackpink In Your Korean, a language pack and textbook that allows you to learn Korean with BLACKPINK. The 12-chapter textbook is story-based and follows the adventures of Blinky, a BLACKPINK fan who is invited to BLACKPINK’s house to spend a day with the members.

Through the story, readers will be able to learn Korean through real-life conversation simulations and BLACKPINK’s catchphrases. The language pack comes with a MotiPen – an electronic pen that plays the BLACKPINK members’ voices when you place it on certain spots in the textbook.

This allows readers to better grasp the pronunciation and intonation of certain words, and they get to be charmed by BLACKPINK’s sweet voices at the same time.

However, do take note that some of the voiceovers provided with the textbook are dubbed by professional Korean voice actors. Unlike regular textbooks, this textbook will never be boring as it is embedded with QR codes that lead to videos of BLACKPINK, which provide the answers to mini quizzes. From cooking to shopping, the various scenarios in the textbook will help you pick up practical conversational skills that can be used in everyday life. The language pack will include a set of Korean keyboard stickers, a pocketbook to review important expressions, and a role-play kit you can use to practice conversing in Korean. The language pack is now available for pre-order on Weverse and KTOWN4U.

The packages including both the textbook and the MotiPen (KRW114,000, ~USD92.66) are only available in a limited number, so be sure to get it before it’s sold out.

Watch the trailer of the language pack here: 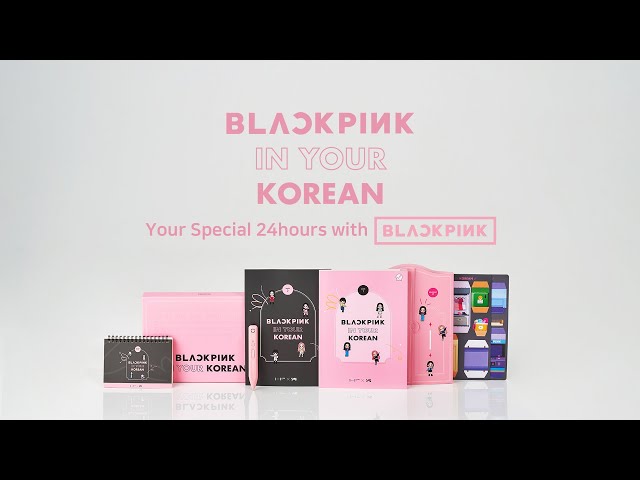 [Official Trailer] BLACKPINK IN YOUR KOREAN

HYBE EDU previously released several language packages with BTS and TinyTan, and they are now expanding their territory into the world of BLACKPINK.

Fans of the group should not miss out on the opportunity to get this interactive language pack, as you’ll be more motivated to learn Korean. 20 Facts About Ahn Hyo-seop, The Heart-throb In Business Proposal & Lovers Of The Red Sky
20 Lee Jung-jae Facts About The Veteran Actor In Squid Game, Including His Heiress Girlfriend