The pandemic may have put a halt to our annual Merdeka celebration but this doesn’t mean that the meaning of the date is lost. Putting the grand parade and nationwide sales aside, Merdeka Day should be about celebrating the everyday Malaysian who’s helped build the country, and is proud to call this land their home.

A Malaysian TikToker who also happens to be a professional photographer was not hesitant to share his pride for Malaysia as he conveyed his patriotism through sharing a video of how he took a next-level Merdeka-themed photo that has since gone viral on TikTok, with over 160,500 views and more than 28,000 likes at the time of writing.

The TikTok user, who goes by the username @heartpatrick shared a short video of the behind the scenes of his highly lauded picture. In the clip that was posted with the caption, “Guess what I’m painting?” he could be seen waving a light stick and walking backwards, manoeuvring his way past a model holding a pose.

10 seconds later, the video then cut to his end product – a spectacular picture of the Petronas Twin Towers in the background and the Jalur Gemilang swirling around an alleyway as a result of the long light exposure he used to take the photo.

Long light exposure is a photography technique where the camera’s shutter closes slower, allowing movements and light to be captured in streaks and trails. Thus, it is also known by the term ‘light painting’. 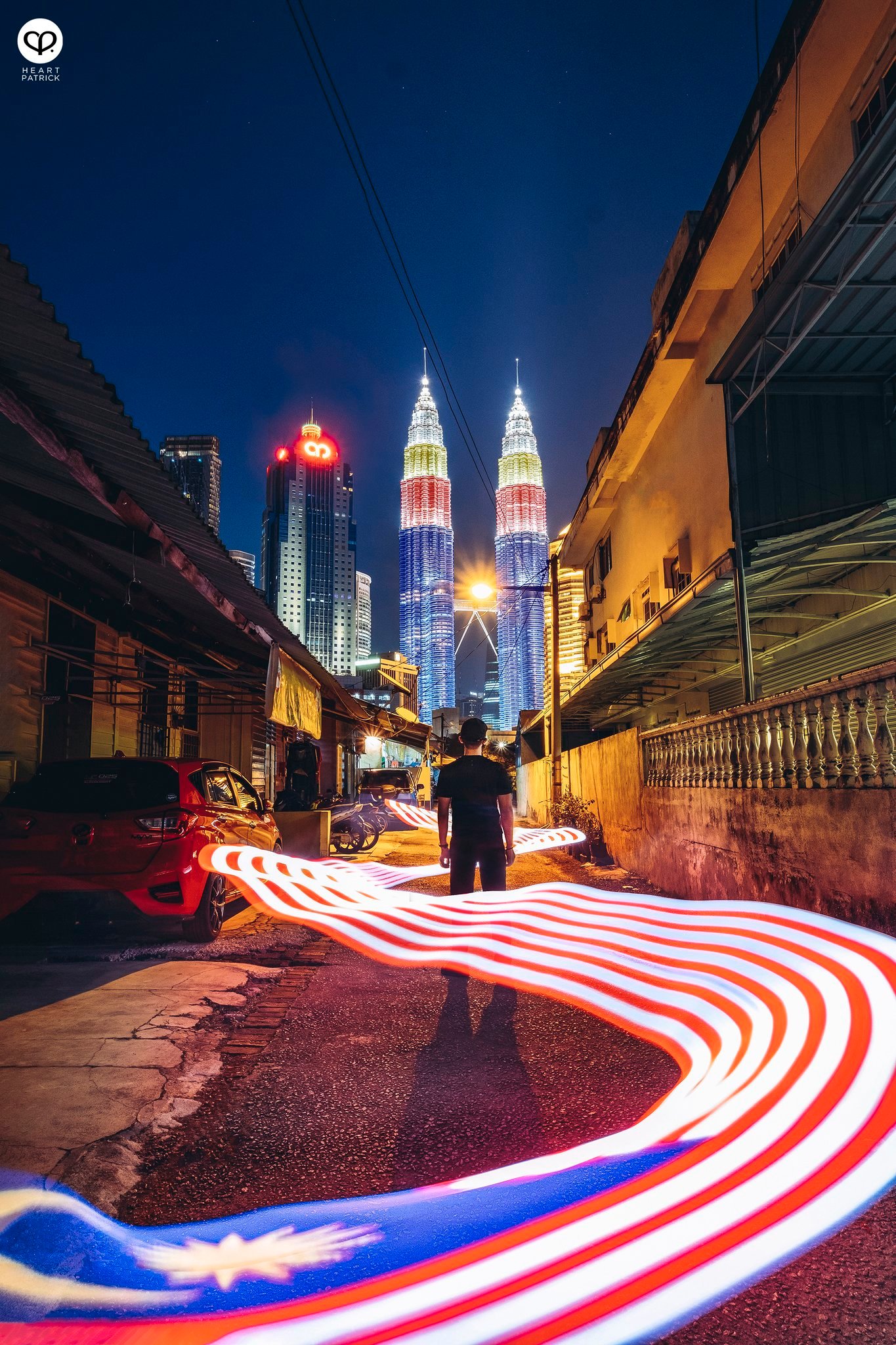 Netizens in awe of his creativity

@heartpatrick definitely sparked the Merdeka spirit among his fellow Malaysians, as netizens were not only incredibly impressed with his creativity, many also commented that they felt proud to be Malaysian after watching his video. Mohd Burhanuddin was one of the viewers who wished the photographer Happy Merdeka and said that his work was the best he has ever seen.

Netizen EMMYquin also conveyed her amazement with a comment in Malay, which can be translated to “I’m so proud. Keep it up and continue sharing your talent”.

It’s not everyday you come across an outstanding creative work and @heartpatrick’s Merdeka visual definitely left an impression on a lot of people who are excited to see more of his work and techniques, including Nami who expressed his admiration and playfully called @heartpatrick a ‘sifu‘, which means master in Chinese.

There are times where we might think that the grass is greener on the other side, as we indulge in international films, music, books, and art, but Malaysia has no shortage of great talent either. We just need to be more encouraging and supportive of our homegrown art because when we come across something remarkable, it can spur feelings of pride, unity, and patriotism – all of which strengthen a nation. Dashcam Video Of Accident Of Car Knocking Into Motorcyclist Reminds Us Not To Use Emergency Lanes Unnecessarily
Forest Skywalk: Canopy Walkway With A 50m High Watchtower That Has Views Of KL &...