Patients who have to spend time at quarantine centres often come out with tales to tell, with some raising concerns over their less-than-satisfactory conditions. Deciding to make the most of his time while undergoing quarantine in Melaka, a man offered to help sweep and collect rubbish at the hall he was staying in.

He offered to do this small yet wholesome act because he wanted to ease frontliners’ burden in any way that he can. He was also encouraged to do so as his bunk mates at the quarantine centre were 2 young children.

Bunk mates are 2 kids, who inspires him to clean

On 27th May 2021, Facebook user Xuanxuan Lim took to Facebook to share how 28-year-old Ahmad Syafiq Syahmi Baharudin, decided to help out frontliners and his bunk mates at Melaka International Trade Centre (MITC) – a COVID-19 Low Risk Treatment Centre (PKRC) – where he was admitted for treatment on 21st May.

He apparently found the conditions at the centre to be comfortable. But he had a problem sitting still, and had plenty of free time amidst his daily routine of eating, drinking and sleeping.

As such, he decided to pick up a broom and clean the area around his bed, the dining room, and prayer area. 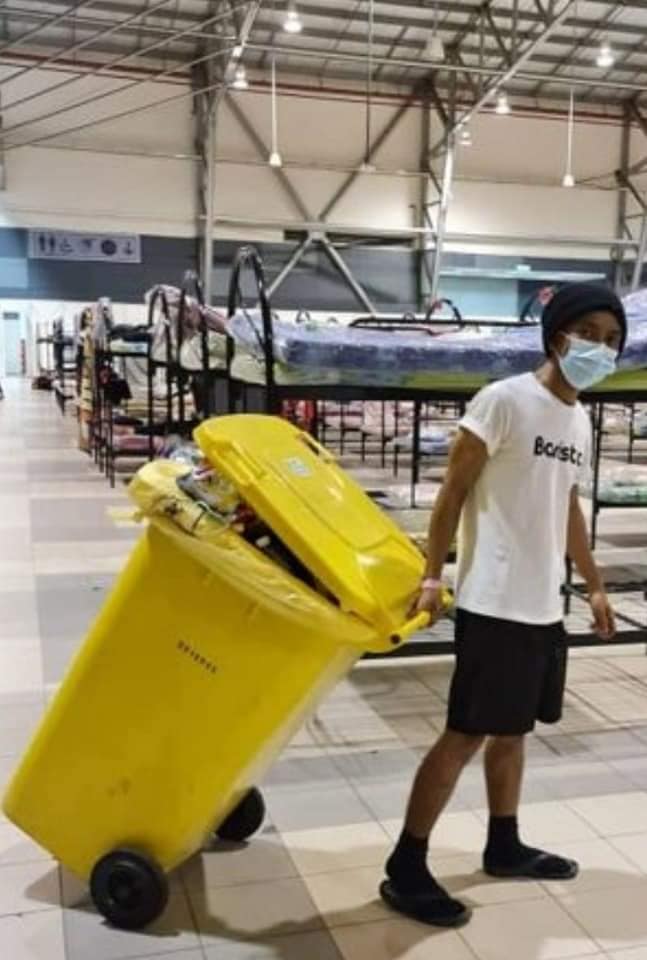 In an interview with Sinar Harian, Ahmad shared that he wanted to help clean whatever area that he could to help the frontliners and staff on duty. He was motivated to do so as patients in the PKRC had apparently been increasing during his stay there.

He also felt sorry for the 2 children, accompanied by their uncle, who were staying in the beds next to his at the PKRC. As they were young, he wanted them to feel comfortable during their quarantine stay.

While his real occupation is an assistant manager at a restaurant, his good deed earned him the nickname of “cleaner” at the PKRC. But he was quoted saying that he didn’t care about the new, unofficial, role he had at the quarantine centre. He was only thankful that his small act helped make him friends that he will miss after getting discharged. Having to undergo quarantine at a centre may be an emotionally and physically draining experience. So we applaud Ahmad for trying to help out frontliners during his stay at the PKRC, and deciding to make good use of his free time there.