Florists urge the government to let them operate during FMCO

Malaysian florists have had a tough time since the start of the COVID-19 pandemic. With repeated Movement Control Orders (MCOs), and flower shops categorised as non-essential services, business for florists hasn’t been doing well since March 2020.

Now, with the ongoing MCO 3.0 or FMCO, florists are hit hard once again. They are unable to sell their produce to customers and are forced to throw away tonnes of fresh flowers. Due to this, they are now urging the government to allow them to operate during the FMCO and are also seeking support from fellow Malaysians by asking them to sign a petition.

Farmers forced to throw away tonnes of fresh flowers 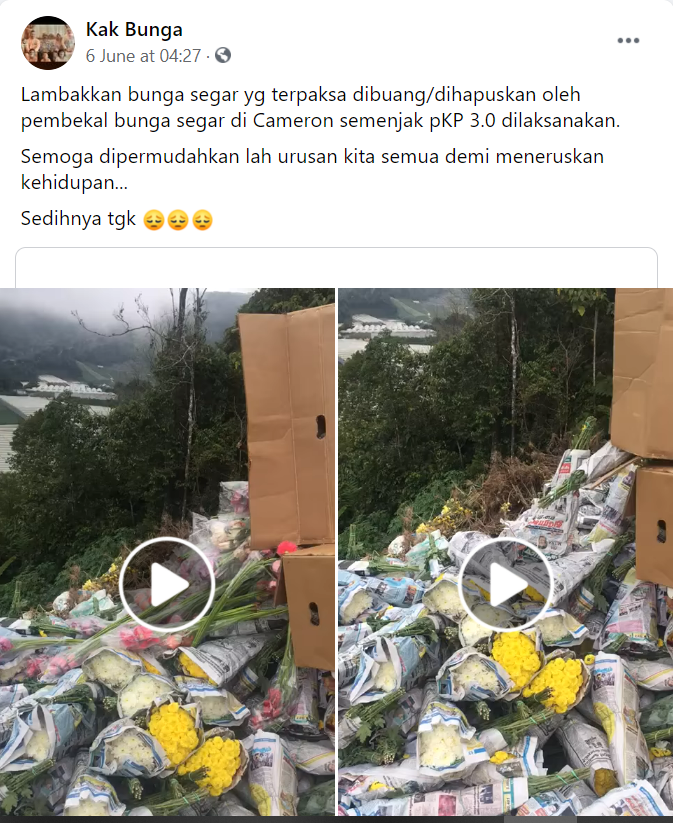 On Saturday, 5th June 2021, The Star reported a viral video of flower farmers in Cameron Highlands throwing away fresh produce as they were unable to sell them during MCO 3.0 as they fall under non-essential services.

Cameron Highlands Indian Farmers Association president Mathan Subramaniam told The Star that over 100 suppliers are “forced to throw away tonnes of fresh flowers each day”, resulting in major losses.

“It takes three or four months to grow young plants until it is time to harvest. A lot of money has been spent to buy the young plants and fertilisers, as well as to pay salaries to farm workers and electricity bills,” he said.

Mathan also told The Star that farmers have no choice but to throw away their daily harvest since they are unable to sell them during the lockdown.

On 17th April 2020, Free Malaysia Today also reported that Cameron Highlands’ flower business worth up to RM1 million suffered a major loss, with farmers struggling to meet even 20% of their regular sales.

Cameron Highlands Floriculturists Association president Lee Peng Ho also mentioned that due to restrictions under the MCO, farmers are forced to throw away their produce. Following the viral news, a petition titled “Permission for fresh flower businesses to operate” started circulating on Facebook, urging locals to show their support for the flower farmers.

In the original post, on 1st June 2021, Facebook user Letchu Manan, questioned the government’s rationale for not allowing flowers to be sold under MCO 3.0 while cigarettes are still sold as usual.

“Fresh flowers are a must for the Indian community prayers. After the first lockdown, we are just starting to get back up on our feet, but we got robbed (of the chance) again. We too have a mouth to feed,” he said, highlighting that flower farmers also belong to the agricultural sector and just like the others, they should be given permission to operate.

Meanwhile, Mathan told The Star that hopefully, the government will let flower shops across the country operate during the FMCO. He said flowers are perishable goods, so they should be allowed to be sold just like vegetables and other similar items.

Flower shops in Malaysia are constantly facing challenges under various stages of the MCO. The demand for fresh flowers has dwindled tremendously during the COVID-19 pandemic as social and religious activities are not allowed to be held the way they used to be, with large crowds in attendance. FMCO Extended Nationwide Till 28th June 2021, SOPs To Remain The Same As Before
Woman Who Broke Into Tears While Rescuing Puppy Trapped Inside Trash Bag Earns M’sians Praise...