The Tokyo 2020 Olympics has just closed its doors. With a lot of challenges, organisers in Japan were able to host a great game and create one of a kind experience for all. Although the Olympics have officially ended, we are still in the same mood as we continue to hear success stories of athletes who broke records and made history at the Games.

The Olympics is the world’s biggest sporting event and there are always exciting things to get to know about it. Here’s a list of some wacky Olympics facts that will give you a good laugh and make you go wow as you discover some shocking truth for the first time.

1. Each athlete is given dozens of condoms at every Olympics A lot of people who follow the Games may be aware of the fact that athletes are given condoms at every Olympics. This practice which began in 1988 has become a tradition in the Games in order to raise awareness about HIV and the need to practice safe sex.

A quick look at the number of condoms being given out at every Olympics can drive you crazy. In 2004, Greece distributed some 130,000 condoms to all the athletes who participated in the Games. In 2016 Brazil gave out about 42 condoms per athlete with a grand total of 450,000 condoms. That’s nearly half a million condoms! Although we do think of the Olympics as the place for sports, other things happen as well.

2. Canadians donated 5 tonnes of maple syrup to a Norwegian ski coach for helping their athlete win a silver medal We all know how much Canadians love their maple syrup. But this is just madness and it certainly makes one laugh. In the 2006 Winter Olympics, Norwegian ski coach Bjornar Haakensmoen helped Canadian athlete, Sara Renner whose ski pole broke during a match by giving her a spare one.

Canada finished in second place bagging a silver medal while Norway ranked fourth. Touched by the kind gesture of the Norwegian coach, Canadians gave Haakensmoen a massive five tonnes of maple syrup as a sign of gratitude in what’s being called the ‘Project Maple Syrup’. Wonder if Haakensmoen is still left with any unused bottles.

3. Haiti and Liechtenstein changed their flags because of the Olympics Imagine walking into a club and seeing someone wearing the same outfit as you. For some people, this may be fun, while others find it a little embarrassing. But for Haiti and Liechtenstein, it was an absolute cringe-worthy moment at the 1936 Olympics in Germany because both countries discovered that they have the same national flags with blue and red stripes.

Liechtenstein then modified their national flag by adding a crown to it the following year. Haiti, too amended their flag over the years which now has a coat of arms. What a conincidence!

4. Ducks disturbed an Aussie rower during his quarterfinal match in 1928

Who would have thought that an athlete at the world’s biggest sporting event would become famous because of ducks? Well, Henry Robert Pearce from Australia was that guy. It was reported that in 1928 that Pearce paused rowing for a while during his quarterfinals match to give way for a family of ducks that passed by his boat.

It’s really amusing to imagine a rower literally waiting for the ducks to cross before he can continue with the match. Even after all that patience, Pearce still won the quarterfinals race. Guess he must have really progressed ahead of his opponents to be able to do this.

5. Athletes were banned from having sex at the 2020 Tokyo Olympics due to Covid-19 This year’s Olympics was different from previous Games in so many ways. But above all, one that made multiple news headlines is the fact that the organisers of the Tokyo 2020 Olympics have repeatedly demanded residents of the Olympic village to abstain from sex.

In June, The Guardian reported that the latest Olympic playbook outlined public health measures that required athletes to “avoid unnecessary forms of physical contact” at the Games despite handing out some 160,000 condoms that were meant to be brought home as souvenirs.

There were also the alleged “anti-sex beds” made out of cardboard that were said to only withstand the bodyweight of one person in an attempt to prevent intimate behaviours among athletes. However, this was later disproved by several athletes who recorded videos of themselves jumping on the bed.

6. Paul McCartney was paid one pound (1.57USD) for his performance at the 2012 London Olympics In 2012, renowned artists and celebrities became a part of the London Olympics’ opening ceremony. Paul McCartney is one of them. The legendary English singer-songwriter performed the famous hit, Hey Jude by The Beatles.

But his closing performance of the opening ceremony earned him a mere one pound or 1.57 US dollars. The incredible performance was essentially a voluntary service where McCartney gave his services for free. Still, the amount was paid as it was necessary for a formal contract to enable the use of his services. Maybe not be a lot of money but it’s certainly a memorable moment for McCartney and the world.

7. Solo synchronised swimming was a thing from 1984 to 1992 before it was scrapped off the Games But the peculiar event was then scrapped after three Olympics because organisers had then realised that a person swimming alone cannot possibly synchronise with anyone else. After 1992, synchronised swimming was only a team event. Perhaps the solo event has got something to do with synchronising with the music? God knows.

8. Chinese acrobats performed a “human jump rope” in 2016 at the gymnastics gala 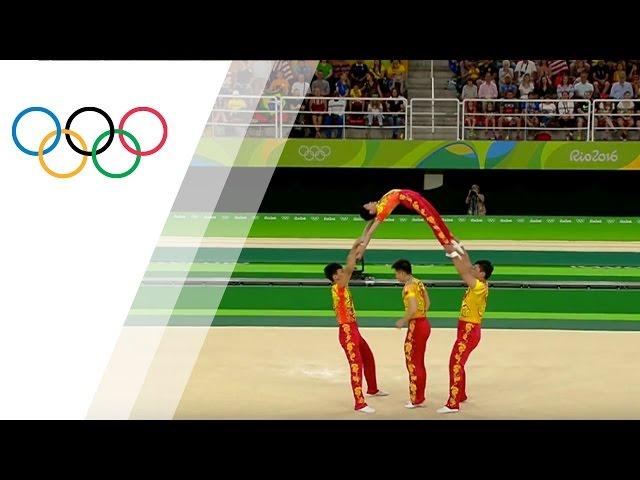 China has never failed to impress the world at every Olympics with their performance. In 2016, they did it once again with the acrobatic team who performed an amusing yet mind-blowing human jump rope. The act won hearts at the Olympics and entertained tens of thousands of viewers.

The acrobats used one of their teammates as the skipping rope to showcase that talent and it escalated so quickly that everyone started cheering and clapping. You can even hear the hosts of the live event laughing as they were presenting in the video above.

It is indeed amusing and shocking to know that the Olympics is not just a place for sports but also a place where a lot of random, funny things happen. We hope these wacky Olympics facts will entertain you and see the Games from a different perspective. Remember to share this out with your friends and family members who are true Olympics fans.