Japanese onsens are so comfortable that even capybaras love to soak in them – there is even an annual competition held in Japan where capybaras compete for the longest soak timing. Winner of the competition from Izu Shaboten zoo The winner of the competition this year was Poru from Izu Shaboten Zoo, who clocked a whopping 1 hour 58 minutes and 38 seconds.

Though nearly two hours spent soaking in an onsen may seem like a world-breaking record, Poru’s timing did not even come close to the all-time record. That honour belongs to Umi from Nasu Animal Kingdom, with a timing of 4 hours 56 minutes and 36 seconds. Poru came in second in 2021, and she finally managed to bring victory to Izu Shaboten Zoo for the first time in seven years in 2022.

For those who wish to watch Poru’s two-hour long victory, you can view it here: 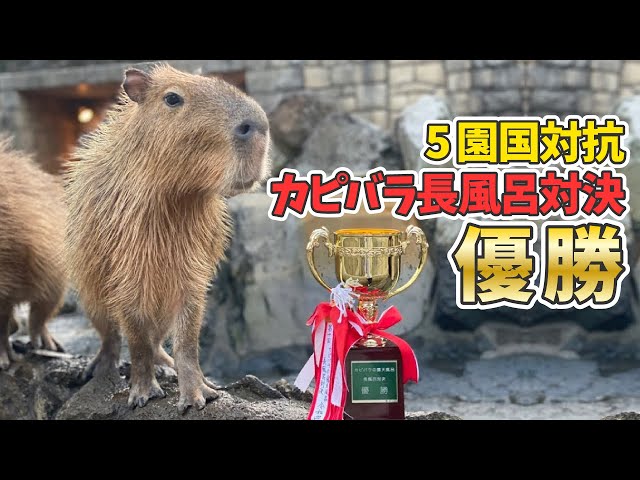 The other capybara competitors Coming in second place at 40 minutes and 15 seconds was Aoba from Nagasaki Bio Park. In third place, we have Kobu from Nasu Animal Kingdom, with a record of 37 minutes. In fourth place, we have Selina from Saitama Children’s Animal Nature Park, with a relatively short soak time of 8 minutes and 58 seconds. Lastly, we have Theta from Ishikawa Zoo coming in fifth place with a timing of 7 minutes and 22 seconds.

How capybaras came to soak in onsens

In the past, capybaras were unable to take baths during the winter as the water was too cold. As a result, they had to wait for spring to come before they could take baths again. According to Izu Shaboten Zoo, a keeper was cleaning an exhibition in the winter of 1982 when he found the capybaras gathering in a small pool of hot water. Since capybaras refuse to bathe in the cold water during winter, the keeper thought that they would agree to take a bath in hot water instead. From then on, onsen baths have been an integral part of the capybaras’ lives in Japan.

Are capybaras better at self-care than humans? An onsen soak sure sounds good, but there is no way that humans can soak in it for two hours without becoming all wrinkly. That said, it’s amusing to think that capybaras, of all animals, are the undisputed champions of self-care.