Children are said to develop a sense of gratitude for people with whom they have a special bond with.

Even though most of them do not stay with their beloved family members when they grow up, that sense of thankfulness still remains in them, just like with this Youtuber.

Here’s the heartwarming story of a famous Thai YouTuber who bought his grandfather a ฿25,000,000 (~USD746,113) custom Lamborghini.

On 9th January 2022, a famous Thai YouTuber, Sprite, posted a video where he gave his grandfather a luxurious car on his YouTube account, SpriteDer SPD. 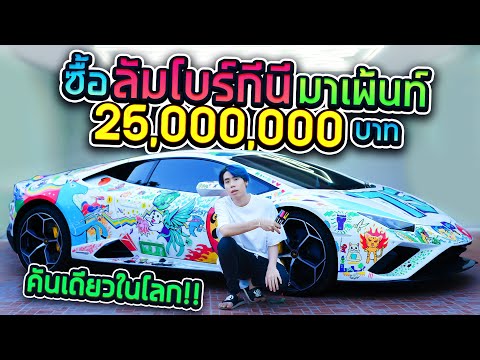 The YouTuber revealed that his grandfather, who raised him since he was young, has used the same old car for many years.

He then decided to buy his grandfather a Lamborghini as a token of his gratitude.

To surprise his grandfather, Sprite said that he would be taking his car in for a tune-up. Instead, he drove to a nearby Lamborghini store and went inside with a suitcase full of cash. After purchasing the car, the man and his friends helped each other to paint the vehicle in order to make it look cool and modern. Now, let’s see how he surprised his grandparents with the big gifts he bought them.

Bountiful YouTuber surprises his grandparents at favourite his childhood spot

The YouTuber asked his grandparents to meet him at a spot that they used to take him when he was little.

There, they opened the massive gift box. After opening the gift box, the grandparents were surprised and in awe upon seeing their new car. Sprite and his grandfather then took the Lamborghini for a spin, just like the old days when they used to drive around together.

Netizens praise the man for his gratitude

After the clip went viral on YouTube – amassing more than four million views – many netizens praised the man for his gratitude and generosity.

Translation: I wished the grandfather enjoys his new car.

One netizen sent his good wishes for the elder to enjoy his new car.

Translation: Congratulations to ‘Prite. I have followed you since the first day and today you’re successful. I will always support you.

Another netizen showed their strong support for the YouTuber.

Translation: I cried when his grandparent unboxed.

One netizen commented that tears formed in her eyes when she watched the grandparents unbox the gift.

Gratitude is a good quality people should have

The story of this Thai YouTuber who gifted his grandparents with a Lamborghini and millions of Baht shows the strength of his sense of gratitude for his family members.

But, what’s more important than the gifts he gave are the good intentions behind his actions.