There are many supernatural happenings that science still cannot prove or provide evidence to explain it, and we are always excited to explore some mysterious stuff.

If you love spooky stories, take a look at this viral video of a wheelchair in a Thai hospital.

Empty wheelchair moves around on its own

The haunting video was shared on Youtube, showing an empty wheelchair that seemed to be moving around on its own at night at a hospital in Udonthani.

The video starts off by showing the wheelchair that was still at first, but then moves forward, stops, and move backwards again – all without anyone around to push it. The lot was completely empty
Source

Mr. Thanasak Pakdeenuan, the director of the hospital, shared on The Thaiger that he saw this empty wheelchair parked in front of an emergency room and was curious as to why it was there.

He then checked the CCTV footage with other staff members and were in for a shock after seeing what was going on.

However, after some thinking, Mr. Pakdeenuan felt that it could have been caused by strong winds as it was raining that night.

Netizens try and solve the mystery

After the video went viral online, netizens poured in with many comments and opinions on the possibilities behind what caused the wheelchair to move.

Some commented on how strange and unexplainable happenings are a normal occurrence at hospitals.

Translation: This is a normal thing in a hospital, which all medical staff know. What they have to deal with every night aren’t just patients.

On the other hand, netizens were sceptical about.

Translation: It’s absolutely the wind. Especially when it moves backwards, the leaves are also swaying too.

While we may never know the real reason behind this, the director did add that the wheelchair was donated after its previous owner had passed away. Spooky!

Watch the video and let us know what you think: 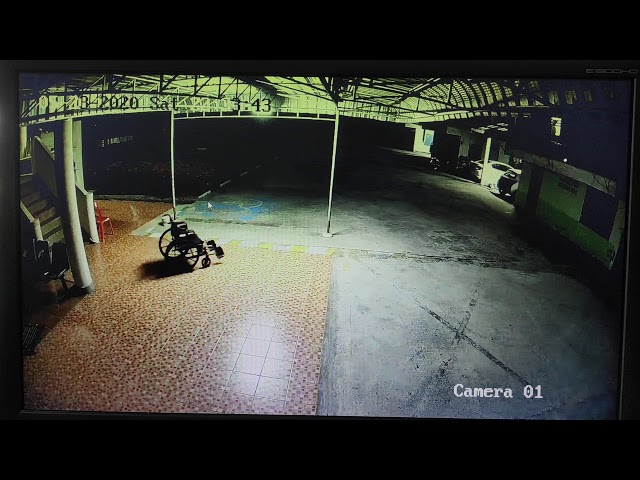