There are 227 monastic principles that Buddhist monks are required to follow.

All of which suggest that they should prevent from all wrongdoings, including deception and taking advantage of people’s kindness.

So, imagine the surprise when a supposed-monk was caught doing both. Here’s the story of a man who was caught tricking people into donating money.

On 27th February 2022, a video showing a Thai monk stripping in public was reposted on YouTube by Thai media outlet, Thai PBS News. 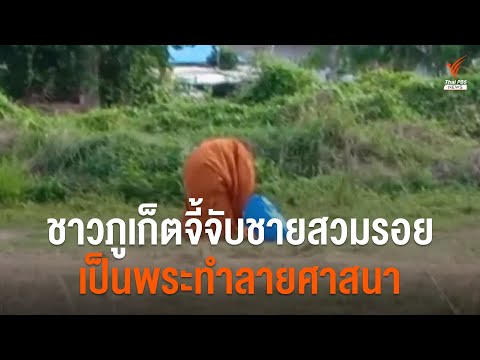 In the video, the monk was spotted stripping publicly, before changing into casual clothes near Montri Tud Road in Phuket. This allegedly happened after he payed the fresh food market a visit, where he received alms from locals who wanted to make merit.

Wondering whether the ‘monk’ was swindling money from well-meaning locals, the cameraman sent the video to the police. According to MGROnline, the ‘monk’ was reported to be a 45 year-old man with no ordination certificate in possession. He was then arrested for posing as a monk and embezzling money from merit makers. After the story was posted online, many netizens shared their comments on the incident.

Translation: Right now, there are many people who have ruined the reputation of Buddhist religion. Good monks are also losing face. One rotten apple spoils the whole barrel.

One netizen commented that those who pose as monks end up ruining the reputation of the Buddhist religion.

Translation: Finally, he unveiled his true self.

Another netizen shared that the culprit’s actions led to the truth coming out.

One viewer suggested that the alleged monk receive legal punishment.

Respect is the key

Since Buddhist monks are held in high regards by many people, it’s very important for those who get ordained to respect the religion by refraining from all wrongdoings.

At the same time, it’s extremely crucial that we respect those who have been ordained by refraining from impersonating them for our own gain. As one netizen said, one rotten apple can spoil the whole barrel.

We hope that this fraudulent monk will not tarnish the reputation of well-regarded Buddhist figures in Thailand. Thai Man Buys 4 Winning Lottery Tickets, Winds Up With ~$735K Jackpot
Jay Fai Bangkok Is A Michelin Star Restaurant Whose Crab Omelette Is So Iconic That...