Panuwat “Ball” Manasri, a GrabFood driver in Bangkok, has been making rounds not just on the road but also on the internet for bringing his 5-month-old child, Puti, to work everyday.

A Twitter user named @VANNIIZ posted a video of Ball and Puti: Translation: “He is just 5-months old and is very cute. His mother has to work, so his father, who works as a Grab driver, has to bring him along. I really love seeing him and I also give him gifts sometimes. So cute!”

After the clip went viral on social media, many users began expressing their opinions online. Some gave them compliments, while others shared their concerns about safety. However, Ball said that he worries about Puti’s safety too, and takes all the necessary precautions to ensure they ride safe. He added that their cost of living is really high and both him and his wife need to work hard. The parents don’t want Puti to be raised by other relatives, and so he has to bring the little one to work together with him.

Ball explained that he started working with his child around 2 months ago. Before working, he tried to bring Puti out to see if he felt scared, and mentioned that he seems to really enjoy going out on a motorcycle. It was after this that Ball and his wife decided that they could go ahead with this plan. As baby Puti’s safety is his father’s priority, he is always equipped with a helmet, UV and pollution protection, and a long-sleeved shirt. Ball also revealed that if he has to work with his child, working hours are limited to 2pm to 4pm and 8pm to 12am only. Ball said that he didn’t aim to be a Youtuber. It started with a video contest, where he uploaded a video of his adventures with Puti. After getting good feedback from viewers and realising that he enjoyed editing videos, Ball continued working on his channel. Puti has a huge fanbase now, with his videos going viral! 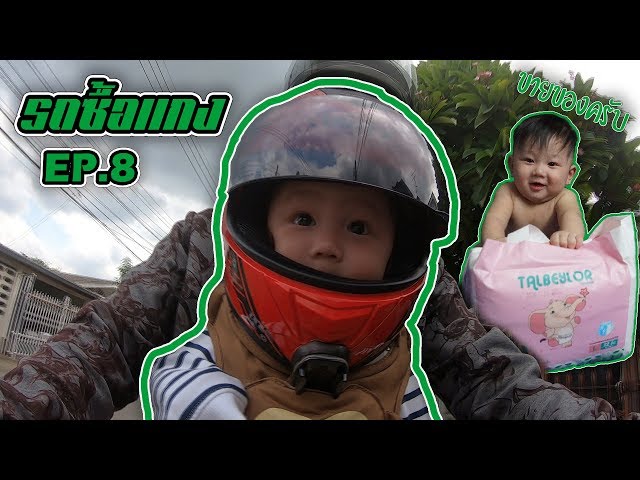 They were even invited to be guests on a TV show with Thairath TV and on a local game show.

Customers that meet Ball and Puti are always happy to see them, and we commend Ball for doing what he can for his little family.

Visit their channel BALL1993 to keep up with this adorable duo.