It’s Miss Universe Philippines season again, and Cebu’s Steffi Aberasturi, who won the Binibining Cebu 2018 crown, is one of the contenders to watch out for in the pageant set to be held on 25th September.

She’s been among the top performers in the preliminary pageant challenges lately, including the video introduction and headshot challenges. And for the runway challenge, she’s turned the Cebu-Cordova Link Expressway (CCLEX), a toll bridge under construction that will link mainland Cebu from Cebu City to Cordova town in Mactan Island, into her own runway with her walk that netizens have dubbed “The Expressway Walk”. 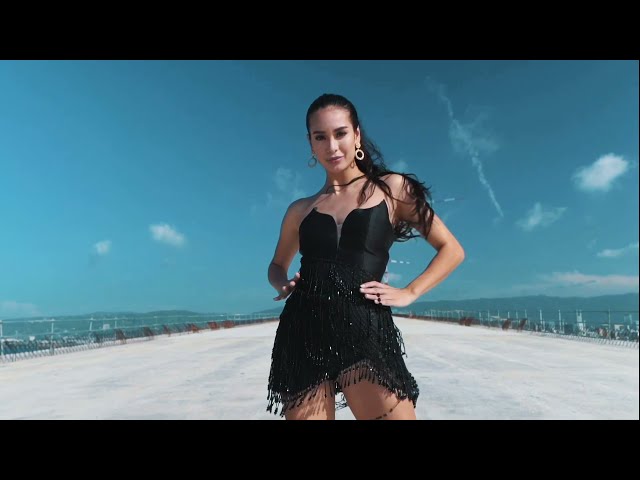 
Switching between three black dresses made by local designers, Aberasturi sashayed effortlessly onto the bridge despite strong winds, delivering a catwalk performance that netizens are calling “The Expressway Walk.” In the video, she wears her long hair in three ways – in a high ponytail, let loose, and in a high bun – showcasing different looks. The beauty queen posted a video of her walk on her Instagram with the caption, “We made history! Proud and honored to be the first Cebuana to strut on the soon-to-open Cebu-Cordova Link Expressway… in HEELS.”

Because of the catwalk’s unique setting, Aberasturi’s runway challenge has been making the rounds online, with some even turning it into a meme. On YouTube, fans are gushing over her performance because they believe it has the elements of a strong runway walk.

“She oozes with confidence and a strong aura that she’s letting us know she’s independent and ready to take on the world. The controlled swaying of her hips while her legs form an ‘X’ while walking forward is so satisfying to watch,” Nochu Jeon observed.

Pageant expert Norman Tinio also weighed in. He noted that the entry submitted by Aberasturi is indeed well thought out, down to the tiniest details, from its location to music to drone shots.

“After watching through 75 videos for the Miss Universe Philippines 2021 Runway Challenge, I think [al]most everyone will agree with me that the entry submitted by Steffi Pearson Aberasturi of Cebu Province is a standout. From the location to the music to the breathtaking drone shots and to the presence of this Cebuana who made a pasarela that commanded attention. Talk about slaying, she nailed this one almost effortlessly,” he said on Facebook.

We’re excited to see more from Cebu’s Steffi Aberasturi, who’s showing everyone her own version of what being a confidently beautiful Filipina is – performing a powerful yet elegant walk despite strong winds!

Here’s to other Miss Universe Philippines candidates as well who are preparing for the upcoming competition.