Malaysia is no stranger to setting Guinness World Records (GWR). From the tallest twin buildings to the largest hotel, our nation is well-known for its achievements worldwide as a developing country in Asia.

Besides these notable world records, Malaysia also happens to hold some wacky, bizarre ones that’ll surely knock your socks off. Pulling a train by teeth and piercing coconuts with one finger are some examples of the out-of-the-world records that Malaysians hold.

Here are 13 of them that prove how amazing our people can be.

1. The heaviest train pulled by teeth There are many world records held by Malaysian athletes in sports. Datuk Lee Chong Wei with the most Olympic medals in badminton, and Mokhtar Dahari – the youngest footballer with the most international goals – are some sports legends that come to mind.

But ordinary Malaysians can accomplish great feats that take a great deal of effort too. Take Velu Rathakrishnan, for example. He holds the Guinness World Record for the heaviest train pulled by teeth – yes, teeth.

While many of us even struggle to bite through hard foods like sugarcane and bruschetta, Velu pulled two KTM commuter trains, weighing a total of 260.8 tonnes, at the Kuala Lumpur Railway Station on 18th October 2003. He was subsequently awarded a GWR for the unusual, yet impressive, attempt. 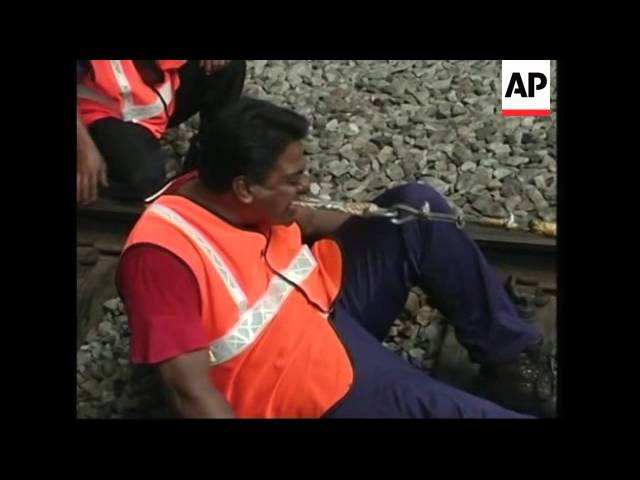 Nasi lemak is Malaysia’s unofficial national dish, and our love for the tasty meal can’t get any bigger than the GWR for the longest line of nasi lemak bungkus. That is, 11,315 packets of nasi lemak were neatly arranged on tables at the ice-skating rink of Sunway Pyramid shopping mall in Subang Jaya.

The record was achieved on 24th August 2013 by HungryGoWhere Malaysia, a food and restaurant review website. In order to qualify for this record, each nasi lemak packet needed to have a quarter cup rice, one slice of cucumber, half a boiled egg, and a soup spoon of sambal belacan, and be wrapped traditionally in banana leaves.

This wasn’t the only prep involved. Volunteers and HungryGoWhere staff members began arranging the nasi lemak as early as 9AM.

The record was clocked in by Guinness World Record adjudicator Carim Valerio who verified all 11,315 packets of nasi lemak. All that food didn’t go to waste – around 7,000 packets of nasi lemak were distributed to various charities and churches, while others were given out to shoppers at Sunway Pyramid. 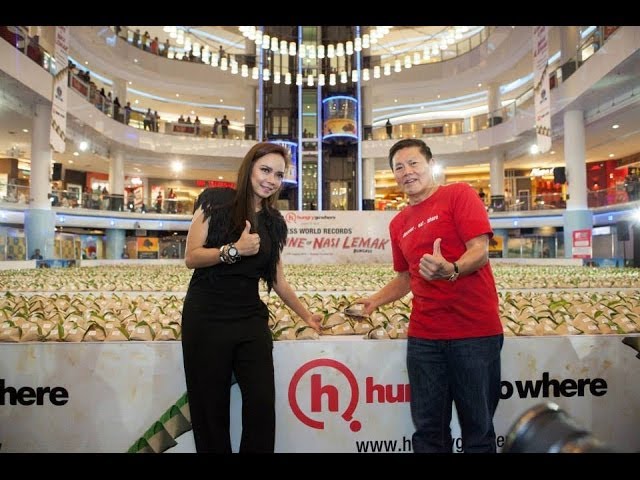 3. The fastest marathon dressed as a flag Setting a world record for sports like marathon running can be extremely hard due to fierce competition among participants.

But Mohd Syahidan bin Alias from Malaysia thought outside of the box when he decided to dress wrapped in a flag and compete in a marathon, which earned him a GWR for the fastest marathon dressed as a flag (male).

Syahidan completed the race in two hours, 54 minutes, and 34 seconds at the 2018 Blackmores’ Sydney Running Festival in Australia, on 16th September 2018. It wasn’t a walk in the park for the elite marathon runner to achieve this GWR – his arms had to be encapsulated within the flag costume throughout the race.

Syahidan wore the Jalur Gemilang in honour of Malaysia Day, which coincided the same day as the race. On 29th September 2016, Pakistan set the GWR for the longest chain of people clasping wrists with 2,950 of its people. But the record didn’t last for too long before mighty Malaysians took the crown for the same record with the participation of 4,222 people a year later.

The wrist-clasping event took place in Negeri Sembilan, at the Tuanku Abdul Rahman Stadium on 19th August 2017. Dignitaries from the Negeri Sembilan state government, including then Menteri Besar Datuk Seri Mohamad Hasan, were also part of the world record attempt, with coverage from the local news and radio stations.

5. The largest gathering of people dressed as cats When we speak of Sarawak, most of us would instantly recall the capital Kuching, which is famous for its iconic cat statue. The cat-loving city which is often thought to be named after cats even holds the GWR for the largest gathering of people dressed as cats – showing just how much they love their feline friends.

Some 440 people, many of whom are schoolchildren, came dressed up as cats on 4th May 2017 at the ASEAN International Film Festival and Awards in Sarawak. The costumes covered the entire body with attendees having whiskers, ears, and a tail as part of the dress-up.

Food trucks are a popular Western way of selling quick bites and snacks in big cities and carnivals. Though food trucks aren’t native to our country, Malaysians are really good at adapting to the latest trends to the point of creating a GWR that amazes the world.

On 28th April 2018, Malaysia earned the world record for the largest food truck rally with 158 vehicles in the country’s food paradise Penang, in conjunction with the Penang International Food Festival.

The food trucks part of the festival sold a wide variety of foods – from local Malaysian dishes such as nasi dagang and kukus berempah to other foods from around the world such as pizza, burgers and takoyaki. However, this record was later broken by a food truck rally held in Missouri, US, in November 2021. 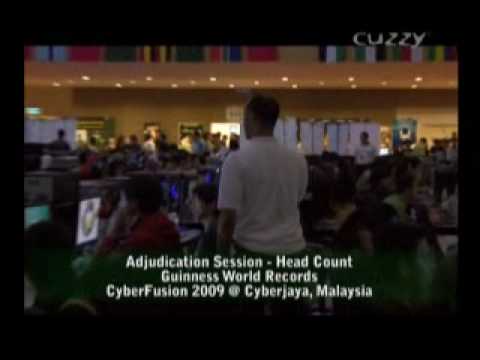 Hardcore gamers can tell you all about the long hours they spent gaming at Local Area Network (LAN) parties. But nothing can likely compare to this group of gamers, who played games non-stop for 40-hours – even setting a GWR.

You might think that a record for tech-related stuff like the longest LAN party is probably held by a developed country like the US. But it’s a revelation, even for tech-savvy millennials, that the world’s longest LAN party actually took place in Malaysia 13 years ago at the Cyber Fusion 2009 at the Multimedia University in Cyberjaya, from 11th to 12th April 2009.

The record-breaking event was completed by 274 gamers from Malaysia, China, Yemen, Brunei and Korea, who played non-stop for 40 hours. Most of the participants of the LAN party were between the ages of 19 and 25. Silat is a martial art from the Nusantara region. The traditional Malay self-defence act is usually practised as a martial art or accompanied by drums during a ceremonial display or dance.

On 29th August 2015, 12,393 participants from Malaysia and across the world gathered for the largest silat lesson directed by Grandmaster Syeikh Dr. Md Radzi Hanafi at Stadium Merdeka in Kuala Lumpur. This historic event highlighted the need for us to continuously protect local traditions and heritage from extinction.

9. The longest rug in the world Borneo is rich in cultural and natural diversity. Apart from holding the GWR for the smallest elephant species and largest carnivorous plant in the world, the island also managed to create another record for the longest rug ever created on 16th May 2016.

The feat was achieved by 400 skilled female Orang Ulu weavers from the Bakun, Murum, and Baram communities who hand-crafted the world’s longest rug that measured 1128.272 metres in length to celebrate the local culture and tradition.

The weavers spent five months working on different sections of the mat and finally joined them together at Sungai Asap in Belaga, Sarawak. Unfortunately, this record was broken by The Children are Painting the World Social Fund and the people of Almaty in Kazakhstan on 16th September 2018.

10. The most eggs crushed with the wrist in 30 seconds Cracking eggs can be a piece of cake for most people. But have you ever thought about doing them with your wrist and trying to beat the clock at the same time?

Here’s Balakrishnan Sivasamy, who crushed 25 eggs in 30 seconds by placing them on the back of his wrist and bending his fingers backwards to break the shells. He earned the record for most eggs crushed with the wrist in 30 seconds – which sounds as painful as it looks, as it is tricky for ordinary people to attempt.

Balakrishnan made this scary record at Naina Mohamad Restaurant in Perak on 20th September 2005. His record still stands the test of time, proving how difficult it is to beat.

11. The most weddings attended as best man Some of us are lucky to get the chance to be the best man or bridesmaid at the weddings of our loved ones. But who would’ve thought that a Malaysian from Sarawak actually holds the GWR for the most weddings attended as best man? That’s a whopping 1,445 weddings in total.

Ting Ming Siong from Sibu, Sarawak, has attended over 1,000 weddings as a best man between September 1975 and February 2009 before being awarded a Guinness World Record on 26th February 2009. This is another world record that is hard for a lot of people to beat – thanks to Ting for setting the bar incredibly high.

12. The fastest time to pierce four coconuts with one finger

Ordinary people like us would often resort to using a knife to pierce any hard fruits like coconuts. But this Malaysian man is so strong that he can pierce a hard coconut with just one finger!

Ho Eng Hui aka Master Ho became the fastest man to pierce four coconuts with a finger at a mind-boggling 12.15 seconds on the Italian television show Lo Show Dei Record, on 21st April 2011.

For this record, the judging committee of GWR ruled that each coconut is pierced once the water on the inside pours out, and the coconuts have been removed from the tree for a period of at least 10 days in advance. But these requirements weren’t difficult at all for Master Ho, whose finger could likely puncture a human skull.

13. The most dice stacked on a cat’s paw Creating a GWR by yourself may not be so easy, so why not use your pets instead like Siew Lian Chui from Puchong, Selangor? This animal lover stacked 10 dice on his short-haired pet cat Bibi’s paw and got a GWR for most dice stacked on a cat’s paw on 18th June 2017 just like that.

As random and as wacky as it sounds, Bibi was able to balance a total of 10 dice on a single steady paw all while remaining calm like a boss. This furry catto can also hold up all 13 playing cards in a suit in one paw apart from balancing dice. Since Bibi is so exceptionally talented, he earned a place in the new GWR2019 book.

Despite being citizens of a relatively smaller country, Malaysians have always proved how amazing they can be with their wacky yet incredible achievements in the global scene.

We hope these records will inspire you to achieve something significant in your life, if not the next unexpected GWR for Malaysia.