The sight of trees by the roadside is often a breath of fresh air in bustling cities and towns. But a tragic accident that took place in George Town, Penang, yesterday on 27th April 2021, saw a 100-year-old Angsana tree crashing down on a passing car, causing the death of the driver.

The tree had reportedly been uprooted after heavy bouts of rain in the state, and investigations are currently ongoing as the tree is said to be transplanted along Jalan Perak by certified arborists several years ago.

The incident happened during the early morning of 27th April, with Jalan Perak Fire and Rescue Station receiving a call at 9.38AM – 8 minutes after the incident took place.

Also yesterday, several netizens took to social media to share videos and photos of the massive fallen tree on Jalan Perak, on the lanes heading towards Van Praagh Road and Jalan Lenggong. Photos that have been circulating online showed the tree completely uprooted from the ground, with its trunk stretching across the busy 4-lane road. A CCTV video that also surfaced on Facebook showed the tree crashing upon a passing car, completely blocking off the road.

According to a report by Bernama on 27th April, the 53-year-old driver of the car that the tree had fallen on was a mechanic, and had been on his way to work.

The fallen tree, that had a girth of 2m, is said to be over a century old, as reported by New Straits Times.

It is also reported that the tree had been replanted on Jalan Perak 3 years ago in 2017.

Extracting the driver from the crushed car took over 2 hours, as the tree’s giant branches were said to hinder the combined efforts of the Penang City Council, the Civil Defence Force, and Volunteer Fire Brigade to rescue him.

The driver was extracted from the car at 11.15AM, but was unfortunately pronounced dead at the scene. Majlis Bandaraya Pulau Pinang (MBPP) released a statement yesterday night on Facebook. In it, they shared their regrets over the incident, and assured the public that investigations are ongoing after many netizens expressed their concerns over the transplanted, then uprooted tree.

The statement also reiterated MBPP’s strict maintenance of over 58,000 trees planted along Jalan Perak and Jalan Lenggong with the help of certified arborists. It said that an inspection of the trees on Jalan Perak, carried out on 31st January 2021, saw their conditions to be in “good health”.

Before the planting of the trees, “tree hazard” assessments were also carried out by certified arborists, along with contractors. Following their transplanting, the trees’ conditions are managed and examined using tools such as a resistograph.

Heavy rainfall has been reported in parts of Malaysia recently. Yesterday’s incident of a tree being uprooted following rainy weather, causing the death of a road user, is yet another worrisome one in a string of unfortunate incidents such as flash floods and shattered windows resulting from these storms.

We extend our condolences to the family of the victim of yesterday’s tragic accident, and hope that the investigations to determine the cause of the tree being uprooted can conclude soon. 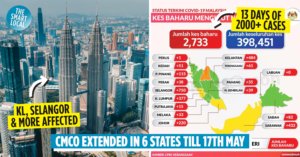