Anyone who has gone fishing will tell you that it takes a tremendous amount of patience, luck, and skills, and the correct equipment to reel in a good catch. But sometimes, luck is all you need, as proven by a Malaysian kid who impressively managed to reel in a real fish using a plastic toy fishing rod, much to the amazement of his father.

Faizal Adha Sa’aet, the father of the boy, shared the hilarious story on 11th October via a Facebook post that has since gone viral with over 5,100 reactions, 8,900 shares, and 4,300 comments at the time of writing. 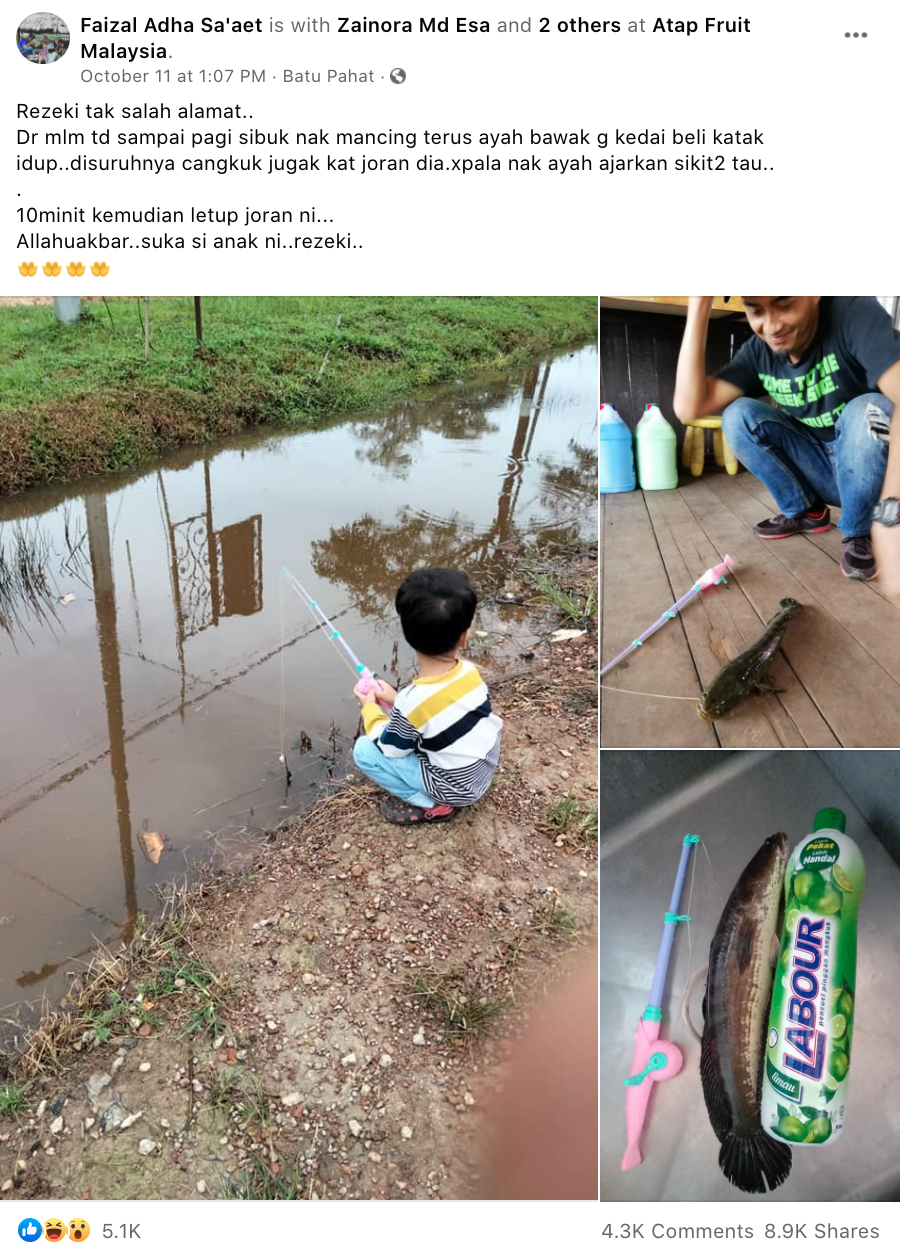 Faizal detailed the account in Malay, recalling how his son had been pestering him to take him fishing for an entire night, all the way up till the next morning.

To pacify his son, Faizal then brought the boy to buy a live frog as bait and allowed him to use his toy fishing rod to “fish” at a ditch. 10 minutes later, much to Faizal’s astonishment, the rod started to shake, and lo and behold, there was a real fish that was even bigger than the rod attached to the end of it.

As the post gained traction, netizens had a ball of a time laughing at the incredulous situation. Facebook user Hafiz As-sabaki commented, “Alamak, it’s difficult to reel in a fish using an expensive rod, but why does it look so much easier with this plastic toy rod? Maybe it’s time for a change.”

Nana Chiana took to sharing the post on her feed. Echoing Hafiz’s sentiments, she said, “This RM2 fishing rod will be flying off the shelves after this.”

Meanwhile, Shima Ima expressed her awe over the size of the kid’s catch. “Look at his catch. It’s actually not just any small, common fish,” she wrote.

Adults tend to dismiss young children’s requests sometimes. But giving in to them might just yield wonderful results, as shown by this kid who just wanted to try his hand at fishing. It may be beginner’s luck, but it sure made his parents’ and a lot of people’s day.

For more funny Malaysian antics, check these stories out: Aunty Takes M'sian Students' Side After They Got Saman-ed For Selling Drinks From Their Car Boot
CMCO To Start In KL, Selangor & Putrajaya From 14th October, Inter-District Travel Barred