It goes without saying that we should always look out for the elderly – whether it’s our loved ones or strangers – who are caught in a predicament. Setting an example for many is this father and son duo who came to the aid of an 81-year-old man. After hearing that he rode on his motorcycle 80km from his home in Melaka to Johor, even spending a night on the streets after wandering too far from an excursion to get dinner, they offered to send him home.

Had to spend a night at a bus shelter

According to a report from ChinaPress on 8th June 2021, the elderly uncle who lives alone had been out buying dinner when he wandered too far from his house in Ayer Keroh, Melaka. He had reportedly rode onto the highway and couldn’t find his way back.

As it had turned dark while he was out – all the shops had closed, and the streets were empty – he had a hard time figuring out where he was while driving. This led him to spend a night outside at a bus shelter by the roadside. Thankfully, once morning came, he came across a durian stall helmed by helpful locals in Bukit Pasir in Muar, Johor – over 80km away from where he had been in Melaka.

In an interview with the Chinese newspaper, the father and son duo who operated the stall told them that the uncle had stopped by to ask where he was, looking tired and cold as it had been raining that day.

According to his account, the elderly uncle managed to undertake the long journey, getting past interstate roadblocks as police officers had been on a break when he rode by.

Upon hearing his story and seeing how exhausted he looked, they offered to buy him breakfast and send him home.

To cross state borders during the current FMCO – which disallows interstate travel – they also went through the hassle of getting a permit letter from the police to send the elderly uncle from Johor to Melaka. The elderly uncle and Yu, the durian stall operator, who helped him.

They came to the decision as it was more convenient for them to do so rather than having his family members come to Johor and pick him up. This was also because they had a car that could carry both the uncle and his motorcycle back home.

The elderly uncle is said to have safely returned home around 11AM on 7th June.

Heartwarming stories such as these are not uncommon even during this trying pandemic. From caring strangers who rescued a lost dog to this man who helped out an orphan affected by COVID-19, they only go to show that Malaysians are a helpful bunch. This father and son durian stall operators, who helped this lost elderly man by offering to send him home after he spent a night at bus stop is yet another example of Malaysians’ caring spirit. 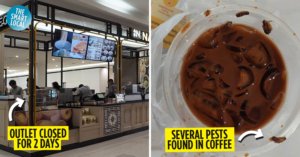 Man Allegedly Finds Cockroaches In Coffee From Nam Heong, Restaurant Says They're Stepping Up Hygiene Checks
Updated SOPs For FMCO: Jogging Only Allowed Within Your Neighbourhood, No More Cycling & More