Malaysian athletes competing at the 2020 Tokyo Olympic Games have been giving us something to look forward to during the pandemic, as we cheer them on from our homes.

Showing their support in unique ways are Malaysian fans of K-pop, who rallied behind badminton shuttler, Lee Zii Jia, after he lost in a highly anticipated match yesterday, 29th July 2021. They did so by coining a fandom name and coming up with “merch” – electric mosquito swatters bearing uncanny resemblance to badminton racquets.

Lee garnered nationwide attention after clinching the All England Open Badminton Championships 2021 title. With all eyes on him, his appearance at the Tokyo 2020 Olympics had many cheering him on during the event, and the encouragement followed, even after he bowed out of the Olympic Games on 29th July after losing to China’s Chen Long.

Going one step beyond the supportive tweets, Facebook posts and Instagram comments for Lee on social media platforms, however, are Malaysian K-pop fans.

Many passionate fans have taken to Twitter to joke that they are leaving their “biases” – or favourite member of a K-pop group – to become a fan of Lee. Viral tweets from fans have cropped up in Malaysia trends, taking over the topic “Lee Zii Jia” on Twitter. Several have gotten creative with their show of support for Lee Zii Jia too, such as netizen @changkisoo who helped coin a fandom name for Lee. The name “Shuttlehearts” or “Shattlehearts” have been floating around online after their tweet went viral – acting much like the moniker ARMY for BTS fans, or Blinks for Blackpink fans. 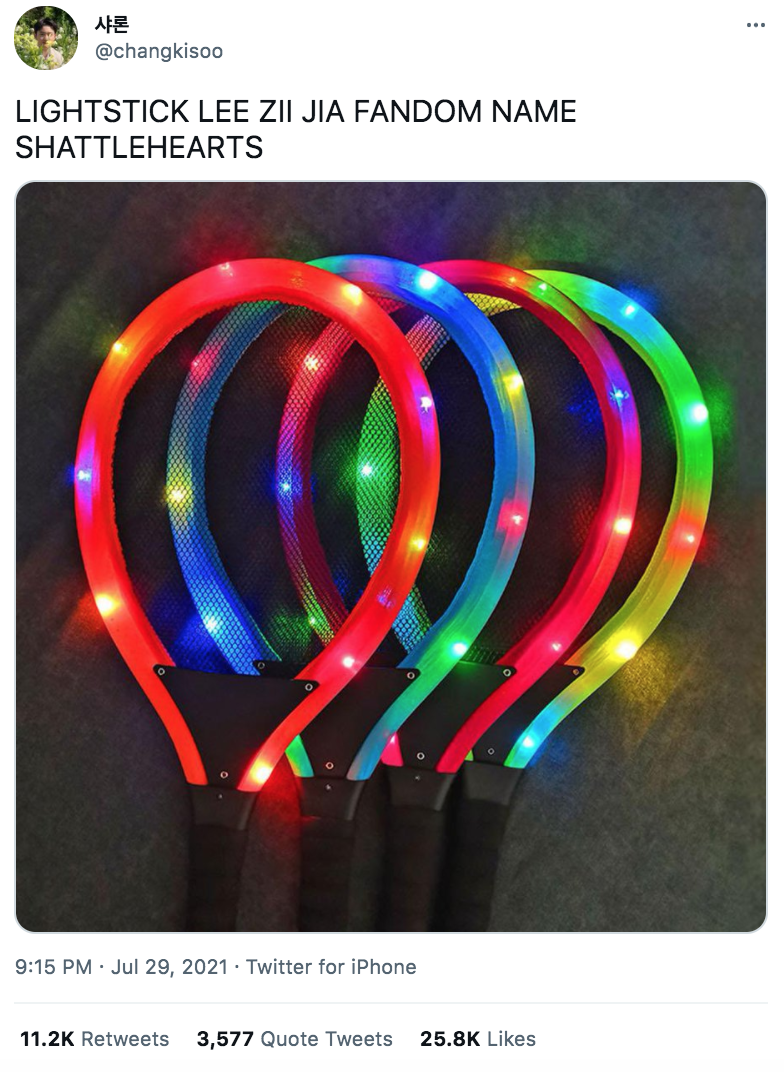 Along with the jokes, fans “designed” a lightstick for Lee – light-up electric mosquito swatters.

For the uninitiated, lightsticks are electronic devices that light up, which fans use to show their support for K-pop groups at concerts. Lee’s “unofficial” one happens to resemble a badminton racquet and is a common Malaysian household item. Some also said that they are looking forward to the next Olympic games to show up with their new merch for Lee. Netizen @twt_saralocal tweeted, “[The] next Olympics will take place in three years’ time. We gotta bring Lee Zii Jia’s lightsticks. We need [an] official colour for LZJ fandom. Let’s go.”

With several tweets from these fans going viral, Shopee Malaysia also joined in on the fun on their Twitter account. They shared a Tweet sharing photos of electric swatters sold on Shopee and clarify that the items aren’t actually “Lee Zii Jia’s lightsticks”, and offered a link along with a safety caution for anyone who did want to get one. 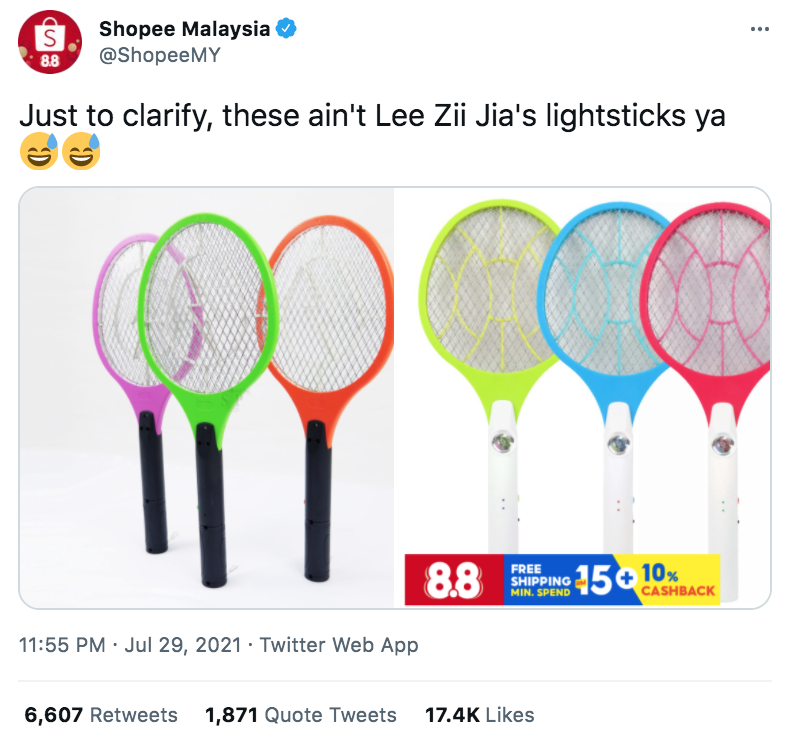 Others also come out in support of Lee Zii Jia

Among the K-pop fans’ tweets are the flurry of Malaysians tweeting their support for Lee and contributing to his name and leading it to trend on Twitter.

Twitter user @tharshanpro, for one, echoed the thoughts of many Malaysians, tweeting, “This is Lee Zii Jia’s first ever Olympics’ experience. Even Lee Chong Wei and Lin Dan didn’t win anything during their first ever Olympics. He will definitely come back stronger for Malaysia and will get that Gold.” Others have simply been retweeting old tweets by Lee Zii Jia on his now deserted Twitter account, with one tweet going viral where he tweeted – “Sorry if I hurt you, I just want to focus my badminton…”

Datuk Lee Chong Wei took to his Facebook to send a message to Lee too. He cheered on the latter for his stellar performance, while saying that he was proud of the shuttler’s efforts.

Offering some lighthearted cheer, Datuk Lee Chong Wei also addressed Chen Long, who beat Lee in yesterday’s game, saying, “You again! Better don’t let us see you in Malaysia, in next one month!” – only to add that he was joking and wishing him the best in for rest of the Tokyo 2020 Olympics in a show of true sportsmanship. Lee also came out to address the end of his Olympic journey on his Instagram page in a lengthy message, which reads:

“Tokyo Olympic, my first Olympic ended in Last-16, but the journey still has to move on. Hoping to give some motivation to all the Malaysians and fans especially during this pandemic. But, it ended up not really well, sorry to make everyone [feel] down. This is an all-new experience to me and I believe it happens to all the athletes after waiting for five years to step on this court.

Luckily it really happened. Thank you, Tokyo Olympics for making this awesome platform. For me, it’s more than the five years, more than the five rings (they’re really heavy 😅) and also, the expectations after winning All England.

I accept the pressure and challenge, but I’m still in the starting phase of my journey. Thank you to my coaches and support teams, they really did their best, so no one [is] to blame. If [there’s] anyone you want to blame, then it should be me. I’m the one holding racquet, standing on the court. I have no regrets!

But unfortunately I’m sad that I can’t carry the Malaysian pride and flag till the end. Really touched and appreciate receiving all the support and encouragement from everyone. And I’m always thankful that I have all of you, willing to listen to my thoughts and feelings. It means a lot to me. Now, I should get back to my routine, review my mistakes, correct my imperfections and train harder. I will give my best effort to make ‘Lee Zii Jia’ come back stronger on the next podiums.” While Malaysia has yet to bag a medal at the Tokyo 2020 Olympics, we remain proud of our athletes and thankful for their efforts at representing our country. Such is the case with Lee Zii Jia, whom we are proud of and look forward to supporting in the future, as echoed by these passionate individuals online. Aaron Chia & Soh Wooi Yik: 8 Facts Every Malaysian Should Know About The Men’s Doubles Badminton Players
Jollibee To Open 120 Stores In West Malaysia From 2022, So Everyone Can Feast On...