Malaysians are big fans of badminton and it’s not an overstatement to say that badminton is the nation’s favourite sport. Over the years, we’ve produced many badminton legends such as Rashid Sidek, Misbun Sidek, Punch Gunalan and Lee Chong Wei who made us proud internationally. Thankfully, that legacy is being continued by the next generation of players including Lee Zii Jia, Aaron Chia and Soh Wooi Yik who are already performing well in international tournaments.

Though male players are the first that come to our minds when we think of the sport, a female player named Kisona Selvaduray is determined to make a name for herself through her success. Here’s a list of facts you should know about the national badminton player who’s already won six Badminton World Federation (BWF) titles.

1. Kisona started playing badminton at the age of four Born in 1998, Kisona Selvaduray is a 23-year-old badminton player from Seremban, Negeri Sembilan. She started playing the sport at the age of four at the Negeri Sembilan Chinese Recreation Club in Jelebu. Her motivation to venture into the sport came from her parents who also love the sport.

Kisona became a professional badminton player at seven and her badminton career kick-started in 2009 when she won the singles and doubles (with Kelly Siow) titles in a badminton tournament in Kangar, Perlis, by the Malaysia Schools Sports Council (MSSM).

At that time, she was only 10 years old and the youngest champion in the history of the tournament.

2. She comes from a family of badminton players Kisona is the youngest in her family and she has two brothers and a sister. An interesting fact about her family members is that all of them love the sport and have actually participated in tournaments.

Her father A. Selvaduray is a retired police officer who represented the Jelebu police team in the Negeri Government Services Games, and also a qualified grade three umpire. Her mother S.Valarmathi represented her school in badminton, and has also played for the Police Family Association team.

Meanwhile, her siblings Thinagaran, Mahendran, and Kanmani have represented the Jelebu district in badminton tournaments in Negeri Sembilan.

3. Kisona Selvaduray can speak five languages, including Cantonese and Mandarin Apart from English, Malay and Tamil, she can speak Cantonese and Mandarin as well. This is because Kisona attained her primary education from SJK (C) Yuk Hwa – a Chinese school.

4. She made her international badminton debut aged 19 Kisona’s first international game was the 2017 Indonesia International Series held in Surabaya when she was 19 years old. She rose to fame as a badminton player when she clinched her maiden title after winning against Gregoria Mariska Tunjung in the rubber set with 21–19.

Since then she has participated in multiple international competitions such as the 2019 SEA Games, 2020 Asian Junior Championships, and the 2021 Sudirman Cup, all of which she won a medal in.

5. She won her first gold medal for badminton at the 2019 SEA Games Winning a gold medal in sports is ultimately what every athlete wants so as Kisona. Her first and only gold medal so far for badminton was won at the 2019 SEA Games that took place in the Philippines. In the final match, she competed against Ruselli Hartawan from Indonesia and clinched the gold after winning the rubber set with 21–13.

Apart from the gold medal, Kisona has also won several bronze medals at international games and tournaments such as the 2012 Asian Junior Championships, 2013 Asian Youth Games, and as mentioned above, the 2020 Badminton Asia Championships and the 2021 Sudirman Cup.

6. She has six Badminton World Federation titles up her sleeve A BWF title is arguably one of the most prestigious wins for a badminton player and winning one is not a piece of cake. But Kisona has won the title six times including the one in her international debut.

Apart from that, she has won the title five other times such as the 2017 and 2018 Malaysia International, 2019 Hellas Open, 2019 Sydney International, and 2021 Spanish International. She is still a young player and we are certain that she’ll add to this in due course as she competes in more international tournaments.

7. Kisona currently ranks 53 in the world for women’s singles Kisona’s current world ranking in badminton for women’s singles is 53, the highest she has ever ranked, according to the BWF stats. As for her world tour ranking, she is currently at number 45. So far, she has a total of 88 career wins which is an incredible achievement given that she still has a long way to go in badminton.

The BWF quotes Kisona that her ambition as a badminton player is to rank Top 5 in the Women’s Singles World Rankings. She’s now just a few spots away from the  Top 50 and may she be given more opportunities to represent Malaysia to attain that dream.

Kisona is undeniably a pride of Malaysia and we are confident that her success in the sport will continue to grow.

Although she was subjected to a racial slur recently by a politician, it’s important for everyone to know her worth and continue to support her.

There aren’t many female badminton players whom Malaysians can readily recall, but here’s hoping Kisona can become one who’ll be remembered for decades to come – if we can start recognising talents over skin colour. 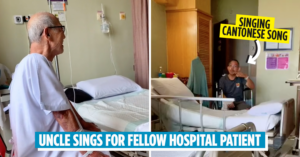 Malay Uncle Sings In Cantonese To Cheer Up Fellow Hospital Patient, Offers To Pray Daily For His Recovery
Malaysians Can Now Raise A Purple Flag If They Have Something To Donate To Help-Seekers...