As restaurants in Malaysia are now open for dine-ins, patrons have been slowly flocking back to their usual food haunts. While this is great news for local businesses, some restaurants are struggling to keep up with both online orders and growing crowds.

A recent viral video on Facebook in which restaurant workers was videoed getting into an argument with a FoodPanda rider, leading to the restaurant owner slapping him, was allegedly due to an overload of orders at the restaurant in Kota Damansara.

In the caption, she shared that the incident took place at Dkota Red Cafe in Damansara, and that the argument broke out because the restaurant was unable to get delivery items ready for a FoodPanda delivery rider who was already waiting at the premises.

She also urged restaurants not to take any online delivery orders if they are already swamped with walk-in customers. This is because many delivery riders have endured similar situations such as in the video she posted before, but according to her, they’ve only “stayed silent” all this time.

The 57-second long video begins with a woman and a man – allegedly the owner of the restaurant and his daughter – engaging in a heated conversation with an unnamed FoodPanda delivery rider. The man then proceeds to slap the delivery rider, with other workers seen quickly jumping in to try and hold him back after.

The assault happened after the FoodPanda delivery rider was heard complaining that there was a missing item from the order, and that it was often up to food delivery riders to compensate for it.

The woman then cuts in between the man and FoodPanda delivery rider, and tries to urge the exasperated rider to hurry and leave so he can deliver whatever was already prepared by the restaurant. She also told him to just handle the customer, regardless of the outcome.

However, it is not said whether the order is completed, as the FoodPanda delivery rider continues to question the restaurant workers and the food order on the table. The woman then proceeds to admit that what the owner did was wrong, but it is not clear whether she was referring to the missing order or the assault.

Even in the midst of a frustrating conversation or heated argument, we should never resort to acts of physical violence. It’s always best to resolve it in a calm and reasonable manner so we don’t cause a scene, or act in a way that can cause harm to others. This quarrel serves as a reminder to all to never engage in fights or assault individuals, no matter the reason. 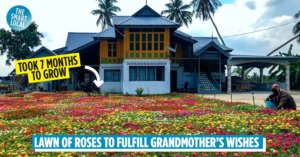 Siblings Grow Roses On Front Lawn To Fulfil Grandmother’s Wish, Result Is A Stunning Flower Field
Waiter Returns Gold Ring To Woman's Son, Who Didn’t Realise He Had Left It At... 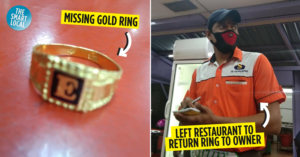