M’sian man creates game for cats out of boredom 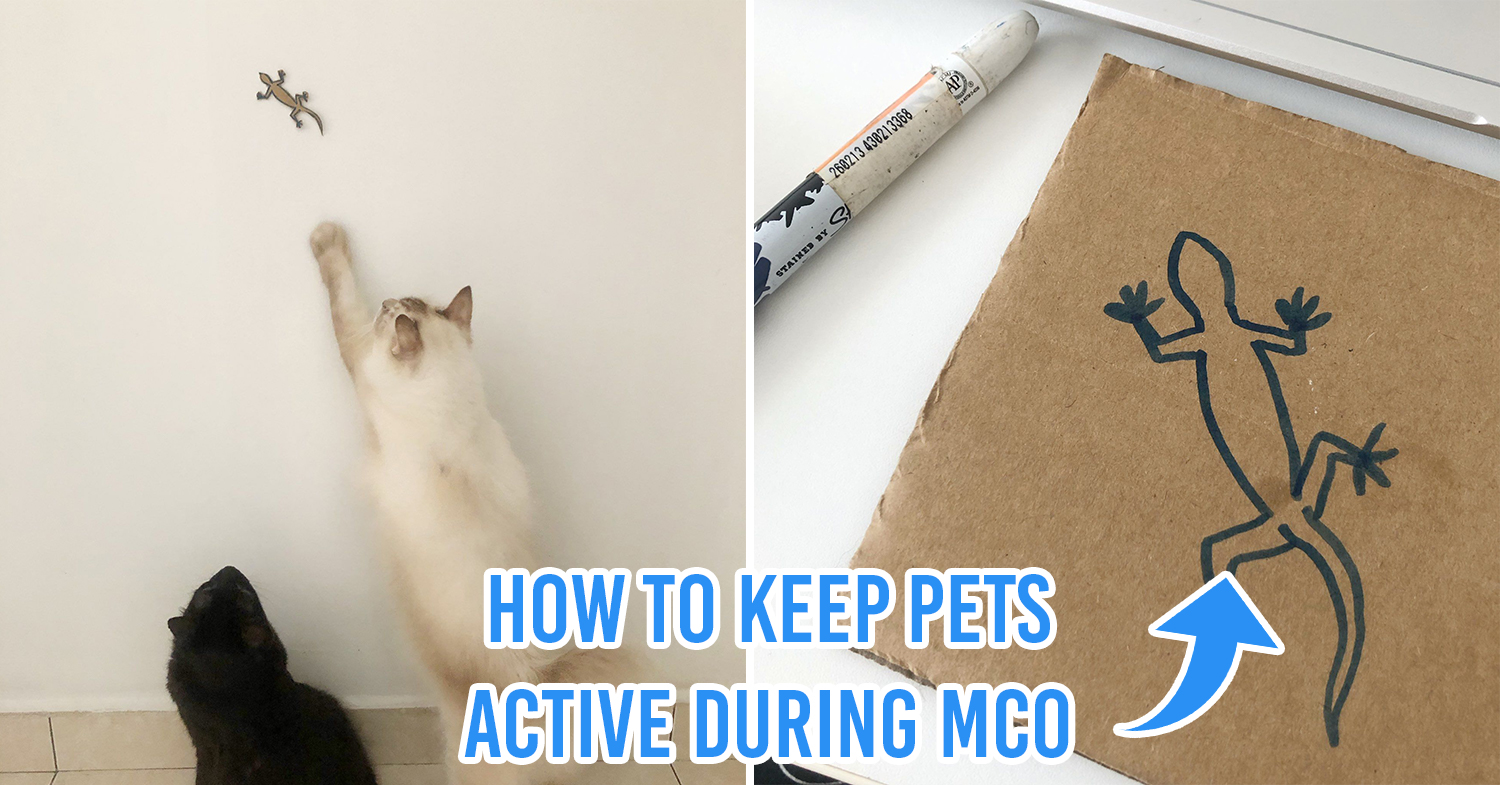 It has been weeks since the Movement Control Order (MCO) began, and Malaysians are slowly running out of ideas on how to kill time. But don’t give up just yet – especially all cat owners out there – as you may just find the inspiration you need from this Twitter user’s made-up game.

He posted a series of photos to his page, sharing how the game he created out of boredom on day 17 of MCO has managed to keep both his cats and himself entertained at home. And all it requires is a lizard made out of cardboard and some tape to stick it onto the wall.

The viral Twitter post quickly blew up in just a few hours with over 14,000 retweets and 16,500 likes. The caption simply says, “17 days into MCO”, and he continued to post more updates on how well his cats were faring against the game. In the 4-part photo series, the original poster (OP) showed how he first created the fake lizard by drawing a rough outline on a piece of cardboard paper. In the 2nd photo, we see the “lizard” all cut out and is stuck onto the wall. We then see his 2 cats, Mueez and Mukhsin, gather by the side of the wall upon spotting the “lizard”. Mukhsin, the white cat, can be seen trying to claw its way up to reach the fake lizard while Mueez, the 3-legged black cat, quietly observes the situation. In the following update, OP‘s photo shows us that Mukhsin successfully caught the lizard and the 2 cats could be seen playing around with it on the floor. OP‘s caption in Malay can be translated to, “They managed to catch it! I need to place it (fake lizard) up higher for the next time”. When it came to round 2, it was Mueez’s time to shine, but it still struggled to catch the lizard. OP poked fun at his pet by saying, “I pity Mueez because he can’t jump to get the lizard as he’s missing a leg”. He jokingly added the hashtag “#siapagelakdosa” or “laughing at this is a sin” at the end of his caption.

In the next update, we see Mueez taking a brave jump toward the fake lizard and it even managed to brush its paws across the “toy”, but alas, Mueez wasn’t successful in bringing it down. Mukhsin, on the other hand, couldn’t be bothered with the game anymore as it appeared that it had already realised that the lizard was a prop.

After about 15 minutes, OP decided to lend Mueez a helping hand and place the fake lizard lower on the wall so that Mueez would have an easier time. His caption read “Since Mueez is missing a leg, let’s give him a chance and lower the lizard”.

Mueez was so excited over finally catching the fake lizard that he did a mini celebratory dance, or at least that’s what we think he’s doing. Real or fake lizard, it sure didn’t seem to matter to Mueez who was just happy that it finally caught the darn thing.

Netizens won over by the cat siblings

Malaysian netizens swarmed the thread’s comment section to spazz over the adorable furbabies and the inventive game the OP created to pass the time during MCO. In fact, a handful of people were even inspired to recreate the game with their own pet cats.

Twitter user @mysarahhanum commented on Mueez’s strong fighting spirit. Her tweet in Malay can be understood as, “Mueez has his game on face! Even if the lizard is fake then so be it”.

Another user predicted the thoughts running through Mukhsin’s head as it watched how immersed Mueez was in the game. Her comment translates to “Dad, why is Mueez so excited? He hasn’t realised it yet huh?”

Twitter user @byanmathers made her own fake lizard to play with her cats and shared a series of photos where the number of cats gathered by the wall gradually increased photo by photo. Fake lizard to keep your cats and yourself entertained during MCO

It turns out that we don’t need much to keep ourselves entertained during MCO; we just need a cut-out lizard made from cardboard. Although, this activity is best reserved for those with cats so for the rest of us who don’t, we get to enjoy fun videos like these.

Whatever the case, OP’s Twitter thread certainly managed to bring about a handful of smiles from Malaysians who’ve been cooped up at home since last month. And we can’t help but hope for more funny animal videos to surface the next few days to help us get through the remaining MCO period. WHO Says M'sia COVID-19 Cases To Peak In Mid-April, Health Ministry To Announce MCO Updates Next Week
M'sia Students Will Have Classes Aired On TV For Free To Stay On Track With...