Most of us have easy access to Covid-19 vaccination centres, but this isn’t the same case for everyone. This gap was initially brought to light by a visually impaired 78-year-old man in Pahang, who went viral online for walking 35km to the nearest clinic to get himself vaccinated.

However, in a morning Buletin Pahang broadcast, the elderly man shared in an interview that he had intended to complete just the second leg of the long journey on foot. He also admitted that he was notified of a vaccination appointment back in June 2021, but opted out due to fear.

The elderly man, Shaikh Ramly Sheikh Ahmad, was said to have left his home in Kampung Kertau at 6AM to get vaccinated at a Covid-19 Mobile Outreach Vaccination Programme (MOVAC), as reported by Harian Metro on 14th July.

He learned of the arrival of MOVAC – a first in Pahang state, as reported by Bernama – at Kuala Wau Health Clinic in Maran from an unnamed individual, who brought him food aid a day ago on 13th July.

In an interview with reporters there, Shaikh Ramly initially shared that he wasn’t able to register for the National Covid-19 Immunisation Programme (PICK) because he is visually impaired, and had no access to the necessary technology to get registered. 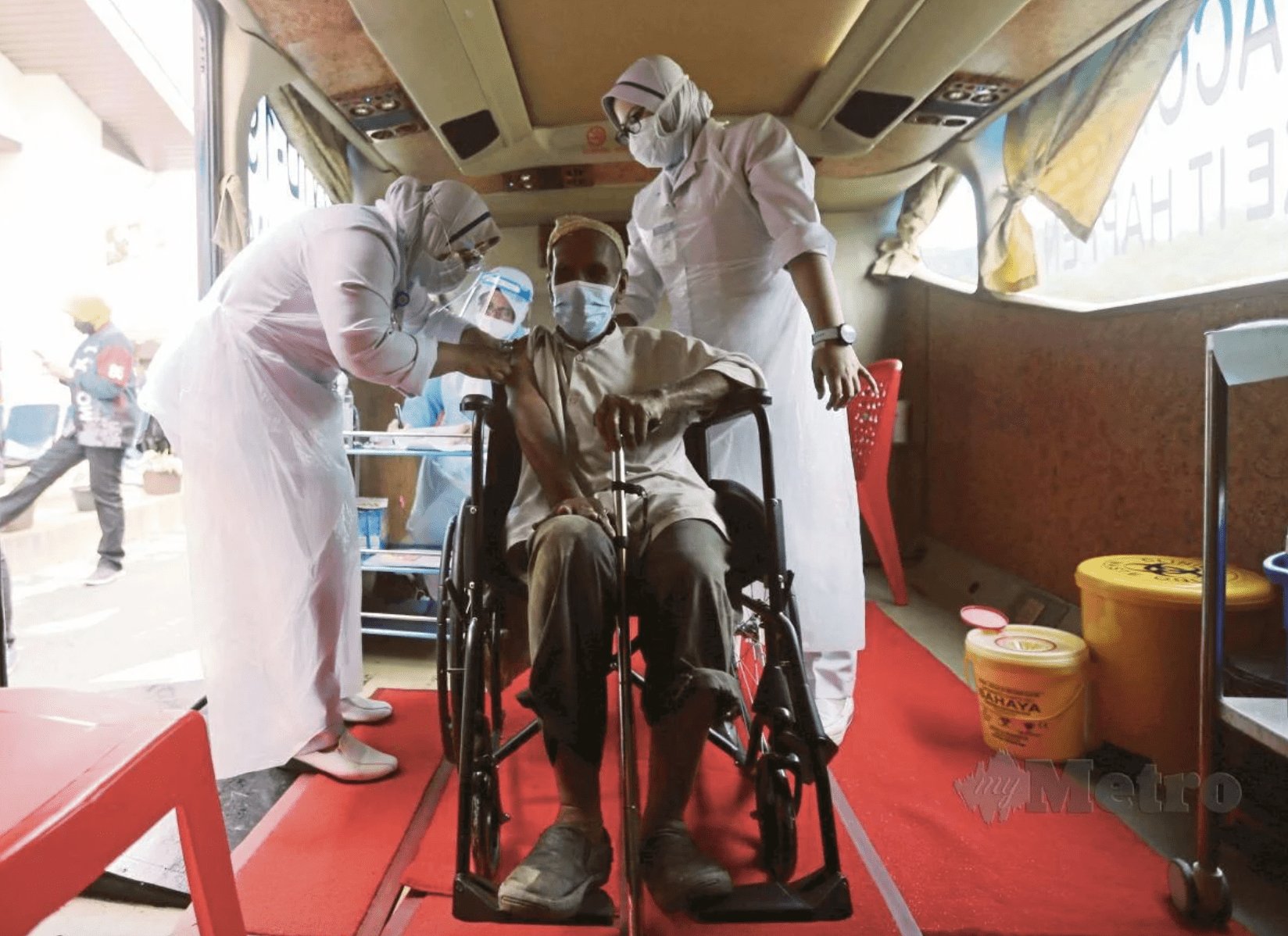 He was found walking alone with a cane and his bag at 10AM – 4 hours after he had left home – by a photographer, Farizul Hariz Awang. The latter took pity on the elderly man and offered him a ride to his destination.

Upon arriving at the health clinic, Shaikh Ramly was greeted by policemen and staff on duty there, who helped him get registered and vaccinated against Covid-19.

Man clarifies he only planned to walk part of the way

Since his story went viral, Shaikh Ramly has clarified that he actually did not walk 35km as initially reported. He revealed this to Dato’ Sri Shahaniza Shamsuddin on 15th July, who is the Pahang culture, unity, welfare, women and family development committee chairman. In the interview, Shaikh Ramly shared that he got a ride with a neighbour to the vaccination centre, but decided to walk part of the way there. It was during this portion of his journey on foot when he encountered the photographer.

He admitted that he simply loved walking wherever he went, but the pandemic prevented him from doing so freely. This is why he went to the MOVAC at Kuala Wau Health Clinic despite there being a vaccination centre at Pekan Tajau – which was apparently closer to him. He also said that he had received a vaccination appointment back in June 2021, but decided to wait it out because he was afraid. He was finally convinced to get vaccinated after reports came out that the injection was relatively painless and felt like “bug bite”.

Elderly man walks over 4 hours to get vaccinated

Stories of individuals going to great lengths to get vaccinated are not uncommon. On 11th June 2021, Bernama reported a 76-year-old single mother walking 3km to get vaccinated at a Covid-19 vaccination centre in Kota Bharu. She started her journey at 10AM, arrived at 1PM, and was later offered a free Grab ride home by a caring personnel on duty. Cops Nab 28 At A Birthday Party In KL Luxury Apartment, 11 Tested Positive For Drugs
Myburgerlab To Close All Stores Temporarily From 26th To 30th July In Support Of Mental...