Disney Plus Hotstar streaming in M’sia on 1st June

No doubt, many of us have been missing our Disney movie binges after a whole slew of them were taken off Netflix’s catalogue due to the launch of Disney+ – a new subscription-based streaming platform. But it looks like this won’t be the case for us any longer as Disney+ Hotstar will be available in Malaysia from 1st June 2021. There’ll be much to look out for too, with over 800 films and 18,000 episodes from Disney, Marvel, Pixar and more all on their streaming platform.

There are plenty of online streaming platforms online to catch our favourite flicks.

But Disney+ Hotstar is set to bring with it movie titles and TV series that have not been available here before – yes, we’re talking popular ones such as The Mandalorian and WandaVision which we’ll now have access to. The current rate for subscription to Disney+ Hotstar are RM54.90 for 3 months, which works out to be around RM18.30/month.

The streaming platform will work on Android and iOS devices, on mobiles or tablets, as well as with compatible Smart TVs, so everyone can join in on the streaming fun.

Disney+ Hotstar will also be available for Astro customers come 1st June too.

So for movie buffs already subscribed to Astro’s Movie Pack, you’ll be glad to know that you’ll only have to pay a small fee of RM5/month on top of your existing monthly subscription fees to get access to Disney+ Hotstar via the television provider. Movies and TV series to look out for

Disney+ Hotstar’s catalogue is a massive one comprising over 800 films and 18,000 episodes from Disney, Marvel, Pixar, Star Wars, National Geographic and plenty more.

Some notable Disney films making their way here are Mulan and Beauty & The Beast, live-action adaptions of the classic Disney animated films, as well as instalments from the Frozen franchise.

If you’re a Marvel fan, there are Marvel TV series and films that you can look forward to watching, including The Falcon And The Winter Soldier, WandaVision and Avengers: Endgame. Malaysians will also get to catch Loki, which is scheduled to air on 11th June 2021, once it is released on Disney+.

But it’s not all just global hits here. You’ll get to scroll through a list of Malaysian films and TV series too, including popular ones such as Zombitopia and Ejen Ali: The Movie.

We can never have enough online streaming platforms to check out new shows and movies in our free time. This is why we’re more than excited about Disney+ Hotstar launching officially in Malaysia on 1st June with its highly-anticipated catalogue – which is a small win that will help keep us busy while we’re waiting for the pandemic to get under control here. 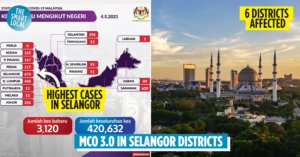 MCO In 6 Districts In Selangor From 6th May Till 17th May; Ramadan Bazaars Still Allowed To Operate
MCO 3.0 In KL Likely Targeted In Localities With High COVID-19 Cases; Ismail Sabri Expected...