We kickstarted 2020 with Crash Landing On You and in 2021, we’re diving into the year with the happy news of Hyun Bin and Son Ye-jin dating officially. While the drama was still airing, many had wished that the two would date for real and now, their wish has finally been granted.

For those who are wondering how and when the couple started dating, we’ve done up a timeline so you can find out exactly when your Ri-Ri K-drama ship first started sailing. While Hyun Bin and Son Ye-jin sat beside each other in 2014, during the International Fantastic Film Festival (PiFan) where they were both awarded the “Producers’ Choice Awards”, it was only in 2017 when they officially worked together.

In 2017, the two were casted in the action-thriller movie The Negotiation (2018). Son Ye-jin played Ha Chae-yoon, a crisis negotiator inspector, while Hyun Bin played Min Tae-gu, a kidnapper. Pre-production began on 17th June 2017, which marked their 1st official meeting. In August 2018, Hyun Bin and Son Ye-jin also modelled for Vogue Korea, where they pulled off a chic couple look in a monochromatic photoshoot.

On 19th September 2018, The Negotiation finally premiered in movie theatres. Although the two only filmed one scene together for the movie, it was enough to make them close friends. After the film premiered, Hyun Bin made frequent appearances on Son Ye-jin’s Instagram account, leading to their 1st round of dating rumours.

Many of her Instagram posts with him had cute couple filters, which made fans suspicious of their “friendship”. They even celebrated Hyun Bin’s birthday on 25th September 2018, while they were actively promoting their newly released film.

Shortly after the dating rumours were denied by both agencies in late 2018, the couple was caught in another round of rumours. Hyun Bin & Son Ye-jin at a supermarket in the U.S.
Image credit: @misakichidayo

In January 2019, dating rumours of the two sparked after they were caught on camera going grocery shopping together in the United States. Both of them donned caps and dark outfits but could not escape hawk-eyed fans. Hyun Bin & Son Ye-jin at a supermarket in the U.S.
Image adapted from: @misakichidayo

Although their agencies did not deny the possibility of Hyun Bin and Son Ye-jin being in the U.S. at the same time, they strongly denied any romantic relationships between them. Hyun Bin and Son Ye-jin officially reunited half a year later for the hit drama Crash Landing On You. The first script reading took place on 31st July 2019, while filming began in late August, starting with the scenes shot in Switzerland. Crash Landing On You is a romance drama about Yoon Se-ri (Son Ye-jin), a rich heiress from South Korea, who gets swept away in a storm while paragliding and crash lands into the life of a North Korean elite officer, Ri Jeong-hyeok (Hyun Bin). Hyun Bin and Son Ye-jin’s strong chemistry during the drama and in behind-the-scenes clips once again ignited their dating rumours. 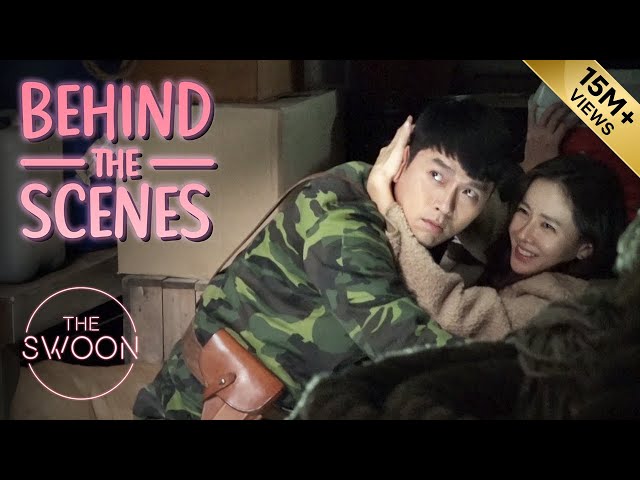 One particular clip of the duo turned controversial because they looked like they were holding hands under the table. Brightened screenshot from a Crash Landing On You behind-the-scenes clip
Image adapted from: Naver TV

The last episode of Crash Landing On You aired on 16th February 2020 and had a record-high average nationwide viewership rating of 21.68%, surpassing Goblin’s record of 18.68%. After the filming for the drama ended, Hyun Bin and Son Ye-jin went their separate ways – but not for long. They say absence makes the heart grow fonder, and that’s exactly what happened to Hyun Bin and Son Ye-jin. Korean news sources reported that it was the time the two spent apart from each other after their drama that made them realise how much they missed each other’s company.

On 1st January 2021, South Korean tabloid Dispatch published an article about the couple’s romantic relationship, including photos of Son Ye-jin getting into Hyun Bin’s car after a golfing session. The couple is said to share the same love for golf and would play together on a course in Gangwon province whenever they could. On that very same day, both agencies confirmed that Hyun Bin and Son Ye-jin developed romantic feelings for each other after working together for Crash Landing On You, and have been dating since March 2020. This also means that the two were already an item at the 56th Baeksang Arts Awards, held on 5th June 2020. Hyun Bin and Son Ye-jin both received the “Tiktok Popularity Award”, following the success of Crash Landing On You. Even though they were seated 1m apart due to safe distancing measures, it didn’t deter Son Ye-jin from adorably sneaking glances at Hyun Bin during the awards ceremony. Son Ye-jin had also taken to Instagram to update her fans on her relationship status with Hyun Bin. She uploaded a beautiful flower arrangement along with a heartfelt message telling fans that she is “thankful to have met a good person” and that she will work hard on the relationship.

“The new year is here. For the first time, I’m writing about something personal instead of work. I wonder why I feel so embarrassed.. Hmm… Yes, things turned out that way.. ^.^ haha… mhmm..^^;; I don’t know what to say, but I feel like I have to say something to everyone.. It feels so awkward and strange..^^; I’m thankful to have met a good person and I’ll tend (to the relationship) with care… ☺️ I’ll always remember all your love and support and keep it close to my heart.. I hope that this new year brings even better things to everyone. Please stay healthy. Ppyong ☺️”

Hyun Bin recently completed the filming for the upcoming action-thriller movie The Point Men in September 2020, while Son Ye-jin is preparing for her Hollywood debut in the movie Cross, set to start filming in March 2021. Nevertheless, we’re sure that the couple will set time aside for each other amidst their busy schedules.

Both of them are 39 years-old this year and many fans are hoping to hear news of their marriage sometime in the near future. But for now, we will continue rooting for the couple’s career success and for their relationship to blossom further. 11 Workplace Korean Dramas About Chasing One's Dreams, Including Start-Up & Run On
20 Best Korean Dramas Of 2020 That Will Bring You Tears, Joy & Laughter