On 25th September, Netflix Korea finally released a trailer for the highly anticipated Hellbound. Based on a popular webtoon, the upcoming Netflix series revolves around themes of the supernatural, horror, and mystery.

Suspenseful trailer that shows the executors of hell

The trailer begins with Yoo Ah-in’s voiceover. “An angel appears and makes a prediction. They first mention the name of the person who hears the prophecy, followed by the time one will die. The person who dies will go to hell.”

The scene moves to a trendy cafe. As the clock strikes 1:20PM, three executors of hell break through the glass windows of the cafe. The executors of hell resemble a giant gorilla, but somehow bigger and more menacing. These hellbeasts kill a young man, whose body is then burnt. Ultimately, only his skeleton remains.

Catch the trailer of Hellbound here: ​​ 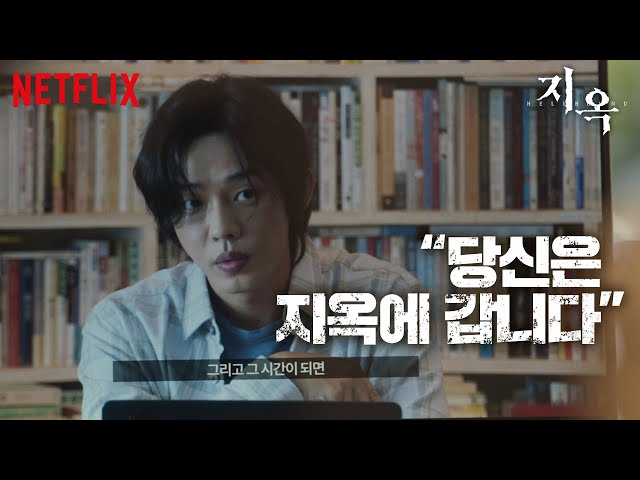 Adapted from the famous webtoon of the same name, Hellbound follows the story of supernatural beings who sentence people to hell. As a result, the society falls into a state of chaos and disorder. Amidst the mayhem, a religious group called the “New Truth Society” thrives as they gain support and attention from the public.

Meanwhile, there is another group of individuals who dig a little deeper into finding out who the executors of hell are, and they make sense of the hellish happenings. Yoo Ah-in will play the role of Jung Jin-soo, the chairman of the New Truth Society. He is one of the protagonists in Hellbound.

Park Jeong-min will take on the role of Bae Young-jae, who struggles to protect his child from the executors of hell. His wife, Song So-hyun, will be played by Won Jin-ah.

Kim Hyun-joo will play Min Hye-jin, a lawyer who fights against the New Truth Society.

Yang Ik-jun is set to play Jin Kyung-hoon, a detective who investigates the New Truth Society to find out what they’re hiding. The upcoming Netflix series will premiere on Netflix on 19th November. Following its latest hit, Squid Game, Netflix is hustling to bring more imaginative Korean stories to the table, and we are not complaining. BTS Jin To Sing Main OST For Jirisan, Release Date Of Theme Song Will Be Announced Soon
The Giant Doll From Squid Game Is Real, And You Can Find It In Jincheon