Anime recommendation lists are always helpful when you need new content to binge, but it does get dreary after seeing the same few anime popping up on every list. Attack on Titan and Demon Slayer are indeed amazing, but most of us – especially avid anime consumers – have already watched them.

If you are looking for something new and unique to watch, this list of underrated anime will be perfect for you. Michiko Malandro is a seasoned criminal who breaks out of a high security prison for the fourth time to look for her former lover, Hiroshi Morenos. She finds her daughter, Hannah Morenos, trapped in an abusive foster family and takes Hannah away with her on her journey to find Hiroshi.

Although Michiko is nothing like the Prince Charming that Hannah had envisioned saving her from her abusive foster family, Hannah allows herself to be taken away by Michiko. The two of them are polar opposites of each other, but they do make an adorable pair.

Michiko to Hatchin is a severely underrated anime that follows an unconventional story of a mother and child as they journey through mature themes of poverty, child exploitation, and betrayals.

With the ultimate goal of finding the elusive Hiroshi, the two of them forge a unique bond while discovering their own meaning of freedom. 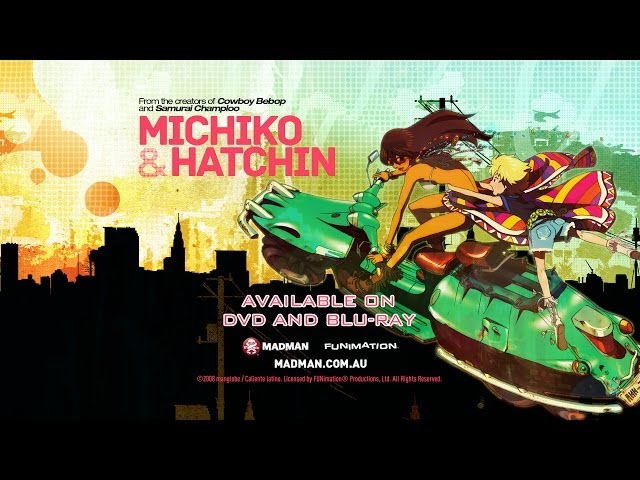 Aslan Jade Callenreese, otherwise known as Ash Lynx, was living on the streets when Dino Golzine, the head of the mafia, took him in and raised him.

Ash is looking to investigate the truth behind “banana fish”, the only words that his brother Griffin utters ever since he returned from the Iraq War. Ash suspects that Dino has something to do with his brother’s mentally unstable condition, as well as the titular “banana fish”.

Ash meets Okumura Eiji, a Japanese reporter investigating American street gangs, who gets kidnapped by Dino’s men soon after. Feeling responsible for this mess, Ash now has to save Eiji while finding out the truth behind “banana fish”. 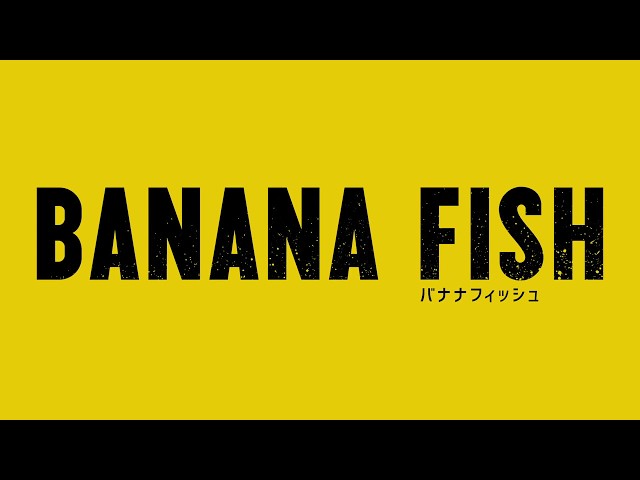 Carole & Tuesday is set in a distant future where mankind has since relocated to Mars and are living in luxury thanks to major advances in AI.

The story follows two girls, Carole and Tuesday, who meet on a bridge one fateful day and decide to create and perform music together.

Carole is a 17-year-old part-timer living in Alba City, barely making ends meet, while Tuesday is from a wealthy family but has run off to escape her family’s suffocating grip on her life. The two decide to create and perform music together, pitting themselves against the AI musicians that currently dominate the market.

Carole & Tuesday is a heartwarming show about two girls finding a place in their AI-dominated world, using music they created from their hearts to relate and possibly unite humanity.

You can watch Carole & Tuesday on Netflix. 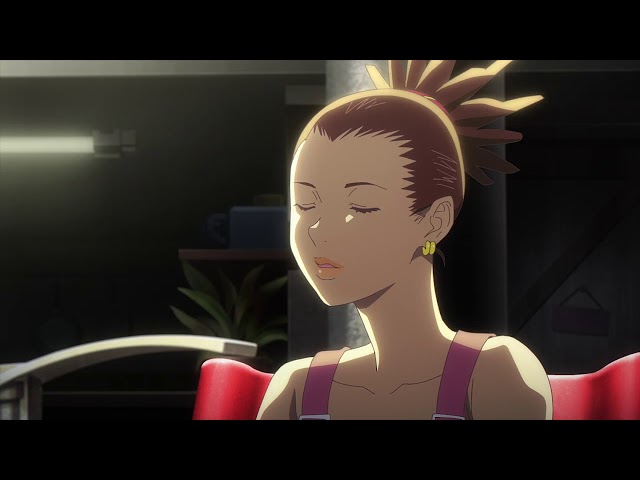 Odd Taxi revolves around a taxi-driving walrus, Odokawa Hiroshi, who meets various unique passengers such as the mysterious nurse Shirakawa Miho, and the delinquent Dobu.

Hiroshi lives an ordinary life, but that all falls apart when a girl goes missing and the trail leads back to him, which sends both the cops and the yakuza after him.

Hiroshi now has to find out the truth behind the girl’s disappearance and clear his name by piecing together the conversations he has with his customers while evading the police and the yakuza.

Odd Taxi is an underrated anime that has a bizarre yet uniquely paced story that hides hints in everyday scenes, keeping you on the edge of your seat as the mystery is slowly revealed. 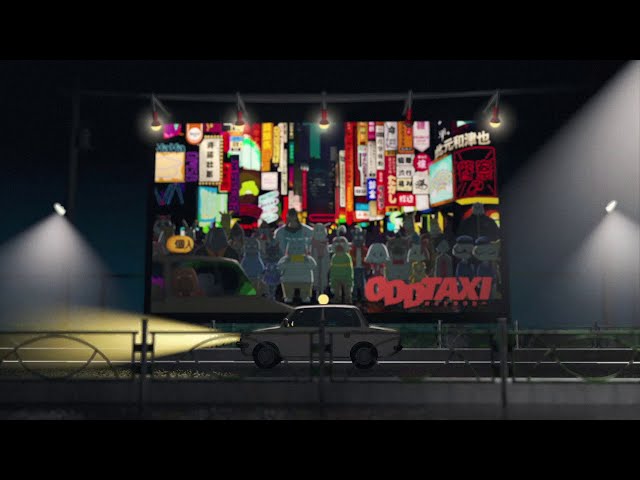 In a distant dystopian future, New York City falls when a gateway between Earth and the Beyond opens, letting in various supernatural monsters and creatures of all shapes and sizes into Earth.

New York City is now known as Hellsalem’s Lot, and the humans on Earth have to coexist with the creatures from the Beyond.

Kekkai Sensen follows Leonardo Watch, an ordinary boy who one day obtains the “All-seeing eyes of the Gods” in exchange for his sister’s sight. Leonardo ends up joining Libra, a secret organisation that ensures the safety and peace of Hellsalem’s Lot behind the scenes.

Between trying to find the truth behind his eyes and staying alive in the hectic and dangerous everyday of Hellsalem’s Lot, Leonardo’s adventures are a combination of the bizarre and the tragic interwoven with various comedic scenes. 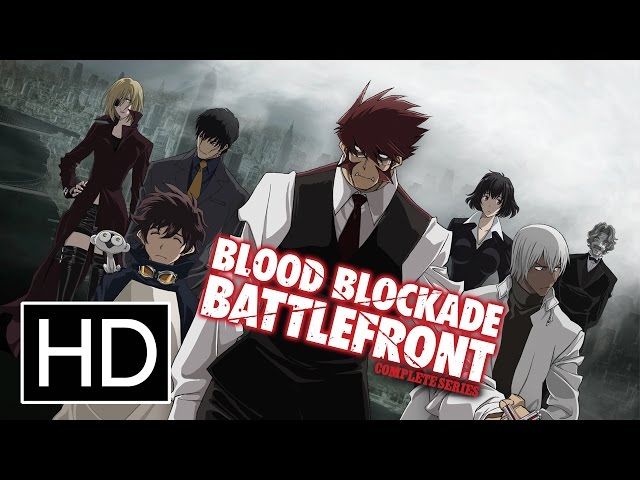 In the world of Hamatora: The Animation, a select few in humanity possess supernatural abilities known as “Minimum”, and these people are dubbed “Minimum holders”.

A detective agency called Yokohama Troubleshooting – Hamatora for short – consists of two Minimum holders, Nice and Murasaki, who use their abilities to solve mysteries and crimes.

Upon realising that their recent cases are seemingly related to a serial killer case that their police officer friend, Art, is working on, Nice and Murasaki turn their attention to solving that. However, Nice soon discovers that there seems to be a connection between the serial killer and himself. 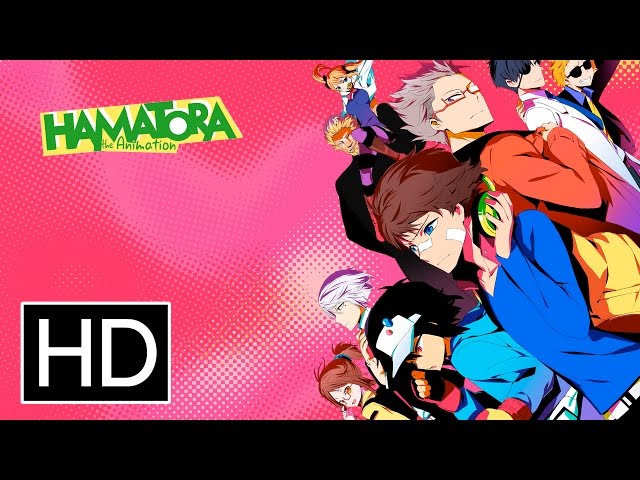 7. Zankyou no Terror (Terror in Resonance) Zankyou no Terror follows the story of two boys, Nine and Twelve, who were part of an experiment to turn young orphans into human weapons.

Having escaped their plight, Nine and Twelve are now behind a terrorist attack in Tokyo, and they threaten to destroy the city if their demands are not met.

In order to stop their mass destruction of Tokyo, the police have to solve the duo’s riddles while trying to find out their identities.

Mishima Lisa, an ordinary high school student, encounters Nine and Twelve and gets roped into their absurd plans. Together, the three of them challenge the notion of crime and justice while exhibiting the utter fragility of society. 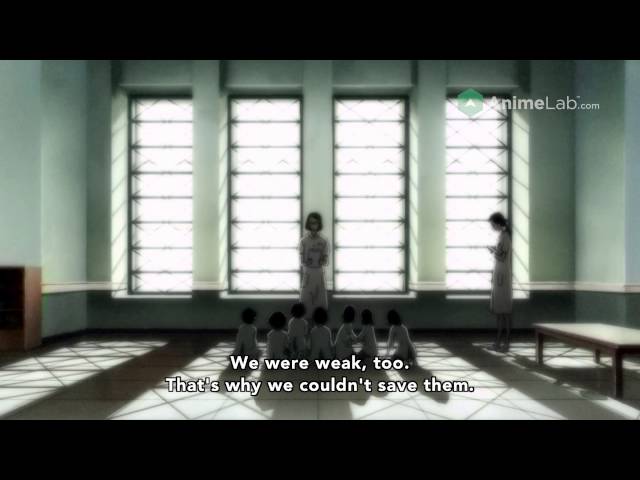 Kokoro Connect follows a group of five friends who formed the Student Cultural Society after realising that no other club in their school piqued their interest.

One day, Yoshifumi Aoki, the infamous class clown, and Kiriyama Yui, who holds a belt in karate, suddenly switch bodies for a short period of time.

Aoki and Yui’s body swap wasn’t just a one-off incident – this strange phenomenon continues to occur between two random members of the club, and there’s seemingly no rhyme or reason, or even an obvious trigger for the swap.

How will this close-knit group of friends prevent ill feelings of discord that continue to arise from this body swapping phenomenon? When the five of them discover each others’ deepest secrets and emotional scars that were previously hidden, cracks start showing in their friendship. 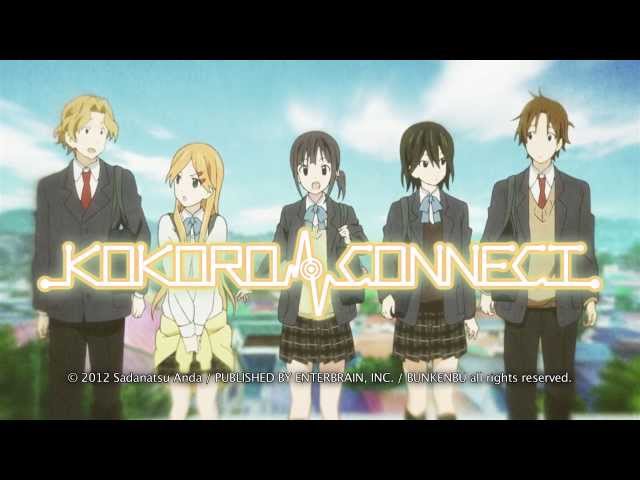 Kiznaiver is set in Sugomori City, a fictional Japanese town that was created to test out the Kizuna system – a system that connects its participants through the physical and emotional pain that they feel.

One day, Katsuhira Agata and a few of his classmates were selected to be test subjects for the Kizuna system. Agata is a unique individual who is unable to feel both physical and emotional pain, which causes him to become an easy target for school bullies.

In having to share their pain with one another, their deepest secrets are eventually revealed, some of which create rifts in their relationships.

Can the Kizuna system fix the unfeeling Agata, or will the vulnerable act of sharing one another’s pain simply create irreparable damage to the group?

Kiznaiver is an emotional journey that explores the concept of pain and vulnerability between a diverse group of teens, each with their own set of problems underneath the selves that they present to the public. 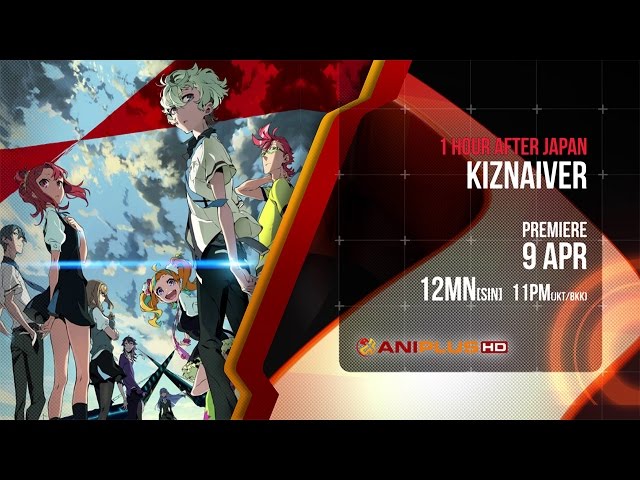 Bakuman is an underrated anime that provides its viewers with a glimpse into the hardships and the general process of becoming a mangaka (漫画家; manga author).

The story follows Moritaka Mashiro, a 14-year-old student who once dreamt of becoming a mangaka when he grew up. However, after his uncle – who was a mangaka – passed due to overwork, Mashiro decided to settle for becoming an ordinary salaryman instead.

One day, Akito Takagi – Mashiro’s classmate – notices the amazing doodles in Mashiro’s notebook and tells Mashiro that they should create a manga together.

Mashiro eventually caves in and agrees to work with Takagi with the aim of creating a bestselling manga that will grant them the title of being the greatest mangaka in Japan.

From detailing the initial process of submitting multiple one-shots to Shueisha – a huge manga publishing company in Japan – to eventually getting serialised, Bakuman creates a semi-realistic portrayal of the struggles and effort that go into creating manga. 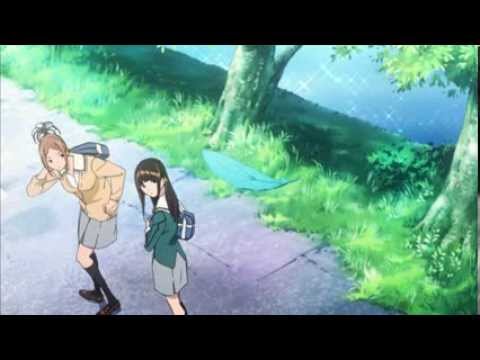 Gangsta follows Nicholas Brown and Worick Arcangelo, who work as Handymen in the fictional city of Ergastalum. Their job description entails doing the dirty work for mobs and police alike.

After taking out a pimp in Ergastalum, the two Handymen find Alex Benedetto – a prostitute that was working for the pimp – on the run from the organisation that forced her into prostitution.

Taking Alex under their wing, Nicholas and Worick are determined to keep her pursuers at bay while chaos descends and conflicts arise.

In Ergastalum, there exists a select few who possess superhuman capabilities due to a drug and are known as Twilights. As the plot progresses, Ergastalum descends into chaos when an underground organisation decides to eliminate all existing Twilights, and the three of them – Alex, Nicholas, and Worick – are inevitably caught up in this mess. 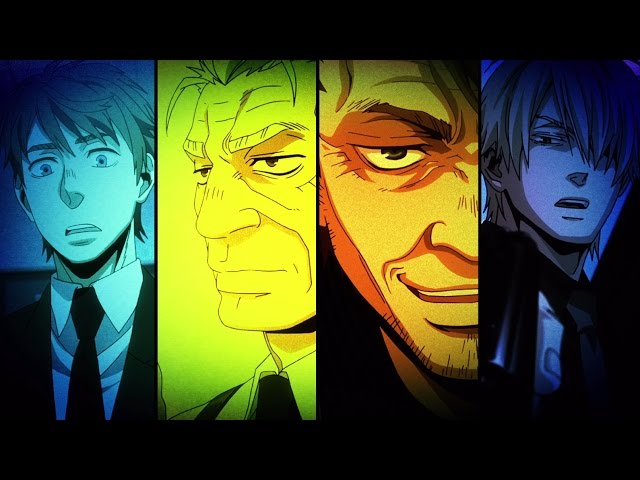 Asobi Asobase is centred on the daily school lives of three middle school girls – Olivia, Hanako, and Kasumi. Olivia is a Caucasian transfer student who is unable to speak English because she was born and raised in Japan, but she hides that fact from her classmates.

Thinking that Olivia is great at English, Kasumi pleads with Olivia to tutor her, offering lessons  in Japanese pastimes in exchange for tutoring help in English.

Unable to refuse the persistent Kasumi, Olivia now has to pick up Japanese games through lessons with Kasumi and eventually teach her English. Hanako, a comical airhead, gets roped into their shenanigans and derives much amusement from it.

The three of them eventually form a Pastime Club that has no specific goals other than to discover and play various popular Japanese games.

The girls’ hilarious interactions and exaggerated facial expressions make Asobi Asobase an easy-to-binge show that will make you burst out laughing.

You can watch Asobi Asobase on Netflix. 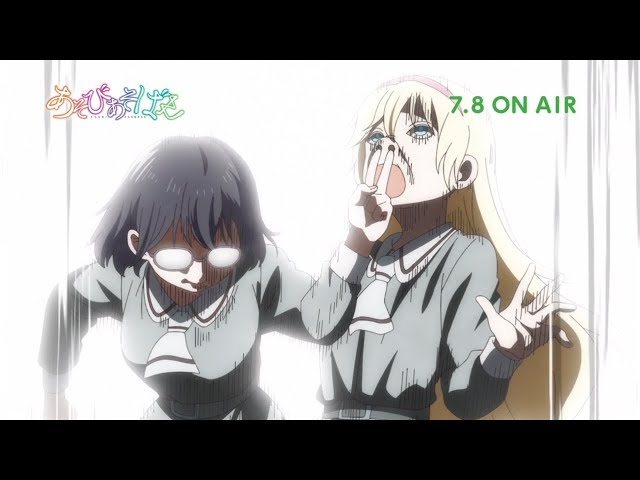 Underrated anime to watch so you can be #notlikeotherweebs

If you want to venture deep into the abyss of underrated anime, start with these lesser-known titles that each have their own alluring charm. From shows that will take you on a painful emotional journey to ones with unique storylines, our list serves as a kickstarter so that you can eventually find your latest favourite underrated anime. Harry Potter Cafe To Open in Japan, Where A Stupefy-ingly Magical Adventure Awaits
Tomonoura Guide: What To Do & Eat In The Charming Port Town That Inspired Ponyo