Tomokazu Sugita and Yuki Kaji are 2 of the most famous seiyū in Japan. Tomokazu is the voice behind Sakata Gintoki, the main character of Gintama, while Yuki Kaji voiced Eren Yeager in Attack On Titan. Tomokazu’s role as Sakata Gintoki topped the ranks and was the most popular male character at the 33rd Anime Grand Prix in 2009. That same year, he was awarded the Best Supporting Actor at the 3rd Seiyū Awards. Tomokazu has also voiced various supporting characters in other popular anime series, such as Bleach, One Piece, and Food Wars! Shokugeki no Soma. Image adapted from: @yuki.kaji and Attack on Titan Fandom

Yuki’s role as Eren Yeager in Attack on Titan won him the Best Actor Award at the 8th Seiyū Awards in 2014. He has also voiced other notable characters like Shoto Todoroki in My Hero Academia, Kenma Kozume in Haikyuu!!, and Haruaki Yachi in C3. Now, instead of voicing anime characters, these 2 famous seiyū are voicing a pair of cute cats having a casual conversation about earthquakes for the 3 latest Panasonic Homes ads.

The new ads are meant to promote Panasonic Homes’ earthquake rebuilding guarantee. The ads assure customers that homes built by Panasonic Homes won’t collapse even if there’s an earthquake. If the building collapses, Panasonic Homes will rebuild it for you, for free. This guarantee is only applicable to rental housing and detached houses.

These 3 new ads about the earthquake rebuilding guarantee come as a continuation to the 4 ads released in January this year. Those 4 ads promoted Panasonic Homes’ air-conditioning system. Oricon’s video compilation of all the ads has already garnered 1.7 million views. One of the original clips posted by Panasonic Homes has reached 3.4 million views. There is also a version with English subtitles. 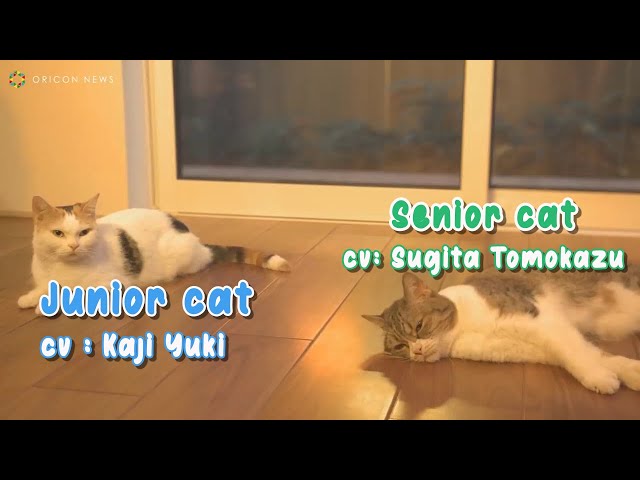 The short clips of the 2 cats quickly stole the hearts of netizens and many reacted positively to these ads. User @DpO4X8PBjBqK2ZG commented that the clips were cute and fun, and that she wanted to see more.

On Youtube, user Dorinkū~ left a comment under Oricon’s video compilation and suggests that Youtube could take a leaf from Panasonic Homes’ book and make similar ads of their own. After Yuki Kaji tweeted about the new clips, users @rena_kaji0831 and @poedom replied that the ads – especially the pairing of Yuki’s voice and the kohai cat – were “healing” as it helped them to de-stress and lift their mood. User @myan_cat38 tweeted asking for the bank account numbers of everyone involved in the planning and production of these ads, saying that they will transfer the bonus over.

User Reddosaatin on YouTube commented that the producer should get a bonus. He received an exaggerated reply from user Seiyū Daisuki Ojisa, suggesting that the bonus should amount to ¥100,000,000 (~USD948,055).

Judging by comments on both Twitter and Youtube, the ads were well-received by the Japanese public. It seems like famous voice actors Tomokazu and Yuki might now receive more opportunities to voice talking animals in addition to anime characters. Looking at the success of these ads, perhaps this series of talking cats might continue in the future.