The Japan men’s national volleyball team has been turning heads at the 2020 Tokyo Olympics, especially after they pulled off Haikyuu!!-esque moves such as the coordinated fake spike by outside hitter Ran Takahashi and team leader Yūki Ishikawa.

Aside from their excellent plays, here are 8 Japanese volleyball team facts that will give you more reasons to stan these young stars.

1. Japan won against Venezuela the first time in 29 years 2. Nishida played through two injuries at the Games Yuji Nishida – Japan’s national team key player and opposite spiker – sprained his ankle just 10 weeks before the Tokyo Olympics. Furthermore, a month before the Games, he had also injured his thigh muscle. Despite not having recovered fully, Nishida was determined to win a medal for Japan at the 2020 Tokyo Olympics.

3. Nishida was the first Japanese player to score 30 points in an Olympic match Even with his injuries, Yuji Nishida was the first Japanese player to score 30 points in an Olympics volleyball match, during the Japan v. Iran game. Furthermore, he was also the first volleyball player to have accomplished this feat at the ongoing 2020 Tokyo Olympics.

4. The members are Haikyuu!! fans Haikyuu!! is the hottest volleyball anime and manga by author Haruichi Furudate. The story follows Hinata Shōyō, an energetic and cheerful young boy who strives to become a great volleyball player. In an interview with JUMP, Yuji mentioned that although he doesn’t read a lot of manga, the storyline of Haikyuu!! resonated with him as a professional volleyball player. He also mentioned that even though some scenes are exaggerated, the bulk of the story is realistic and relatable.

5. The members have their Haikyuu!! biases Masahiro Yanagida on the right
Adapted from: JUMP COMICS CHANNEL

The team’s former captain and outside hitter, Masahiro Yanagida, has a soft spot for Shinsuke Kita. He feels that the character is a reliable leader and an admirable person in the Haikyuu!! series. The team’s middle blocker, Akihiro Yamauchi, stans Lev Haiba because he feels that the character’s volleyball journey and circumstances were relatable to him. Team setter Masahiro Sekita’s bias is Tobio Kageyama, because he feels that the character is mature for his age, and constantly pushes the team to become better. Yuji Nishida mentioned that his favourite character in the series is Ryūnosuke Tanaka because their personalities are somewhat similar.

6.  The members were drawn as characters in Haikyuu!! 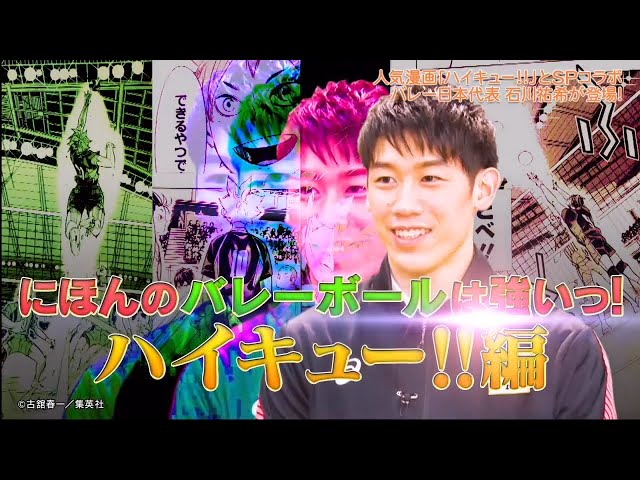 The special chapter was shown during the Yūki Ishikawa x Haikyuu!! TV program, and was subsequently released in volume 41 of the Haikyuu!! manga. He also drew a signed picture of Nishida alongside Tanaka. The drawing was featured in Yuji Nishida’s Ace no Shōdō book, which was published earlier in July. Talk about being a successful fan! The team’s wing spiker, Ran Takahashi, said that his father named him after the baseball term “home run”. According to Takahashi, his father was an ardent baseball fan. However, Ran became a volleyball player instead.

The Japanese volleyball team is definitely the real life embodiment of the characters in Haikyuu!!, with their excellent teamwork, quirky personalities, and burning passion for the sport.

These 8 endearing facts are just the tip of the iceberg – if you watch more of the Japanese volleyball team’s videos, you’ll fall even deeper into the rabbithole and stan them even harder.