The Gundam Factory Yokohama is a Gundam-themed entertainment hub where you can find limited-edition merchandise and special exhibitions. It is also where fiction becomes reality, as the hub houses an 18m-tall Gundam Robot that can actually move. Opened on 19th December 2020, Gundam Factory Yokohama is home to an 18m-tall Gundam Robot. That’s about five to six storeys high, so it’s not an exaggeration to say that the robot looks jaw-droppingly spectacular. Even better – the giant mechanical structure can move and lights up at night! Check out this cool video of the Gundam Robot in action: 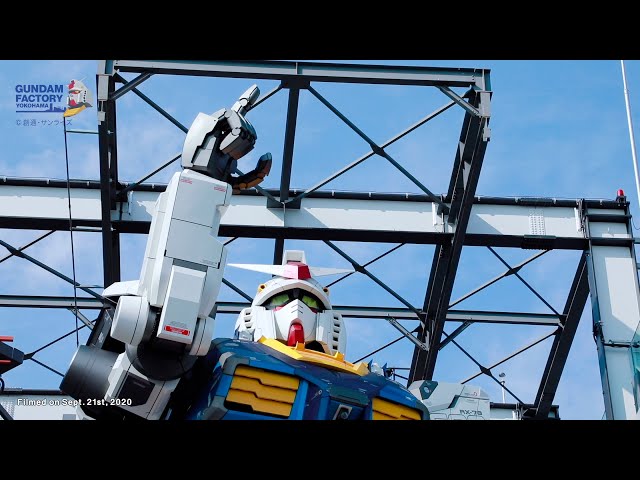 There are shows held every 1-1.5hrs from 10.30AM to 8.30PM. During the show, the giant Gundam Robot will come to life – you can watch it take steps forward and strike poses. Be sure to have your video cameras ready for this.

The best spot to view the show is from the GUNDAM-DOCK Tower. It is located directly to the left of the robot, allowing visitors to admire the robot up close. The dock tower has two viewing platforms. The 15m-high platform is located slightly below the waist level of the robot. The 18m-high platform brings you to the same elevation as the robot’s head. Each entry ticket into the dock tower costs ¥3,300 (~USD30.36) for ages seven and above. Purchase your tickets here. Avid Gundam fans can obtain official limited-edition merchandise at THE GUNDAM BASE YOKOHAMA Satellite. It is an official store that sells various Gundam-related figurines. You can get a 1:144 scale model of the Gundam robot taking a step at the GUNDAM-DOCK Tower (¥2,750, ~USD25.29), or a chibi version of it (¥1,320, ~USD12.13). You can also purchase the adorable Haropla Haro models at ¥660 (~USD6.07) each. They are available in dark blue and sky blue. If you’re getting food to go, consider ordering the cheeseburger (¥1,430, ~USD13.15). While it may not be filling enough for an empty stomach, the juiciness of the burger still makes it a worthy purchase.

Otherwise, have a proper meal with a delectable plate of chicken curry rice (¥1,320, ~USD12.13) made by HOTEL NEW GRAND, a historic Yokohama hotel that opened in 1927. For drinks, sit for a cup of coffee that’s decorated with beautiful Gundam latte art (¥750, ~USD6.90). Many of the designs feature outlines of the Gundam robots with the words “GUNDAM FACTORY”. If it’s too late in the day for a coffee, try their refreshing chilled drinks instead. There are three options to choose from: blue soda, red berry soda, and lemonade. All are available at ¥800 (~USD7.35) per cup. Getting to Gundam Factory Yokohama

There’s less than a year left to visit the Gundam-themed exhibition centre before it goes away, so you have to act fast.

Getting there: Leave the Motomachi-Chukagai Station located on the Minatomirai Line by Exit 4. The entertainment centre is a seven-minute walk from the station exit.

For more places of attraction, check out: Nagatoshi Station Has 20 Torii Gates Lined Along Its Track, Looks Like A Mini Fushimi Inari Shrine
Kawachi Wisteria Garden: A Family Garden With Tunnels Of Purple Wisteria And Maple Leaves