Bali-based US influencer and graphic designer Kristen Antoinette Gray has been deported after her thread of tweets promoting her luxurious lifestyle on a low budget in Bali went viral. In it, she had encouraged other foreigners to make the move to the island during the pandemic.

Gray and her female partner have been residing in Bali for a little over a year, and had been granted onshore visas also known as social visas for 6 months. These onshore visas are provided to foreigners stuck in Indonesia, and who can’t go back home due to the pandemic.

Her tweets described Bali as easy for foreigners to live in Gray’s thread of tweets explained how moving from the US to Bali in her 20s had been a ‘’game changer’’, and further elucidated the benefits of moving to Bali including living a lavish lifestyle for a low budget, the lack of safety concerns, and how the island is welcoming to the LGBTQ+ community.

She tweeted that she had been broke and found it difficult to get employment in the US throughout 2019, and thus wanted to make her own business succeed. Hence, she had moved to Bali with her partner for an initial 6 months to save money and improve their lifestyle, booking one-way air tickets to the island. In her now-deleted tweets, Gray also reveals how she had used to pay USD1,300 per month for a studio apartment in Los Angeles, USA, and later only paid USD400 per month for a lush treehouse in Bali. She also promoted her Bali lifestyle by assuring readers that Bali was queer-friendly, although netizens have pointed out in reply that the local LGBTQ+ community faces challenges and prejudices in their local community.

Gray’s tweets received backlash from the Indonesian public, with many calling her out for being irresponsible by encouraging foreigners to come to Bali amidst a global pandemic. COVID-19 cases in Indonesia keep rising and as of the time of writing, Indonesia has a total of 939,948 COVID-19 cases with over 10,000 new cases a day. During her stay in Bali, Gray had launched an e-book titled Our Bali Life Is Yours. The e-book that sold for USD30 also included information on visa agents for foreigners interested in moving to Bali during the pandemic, according to her now-deleted tweet that promoted her e-book. 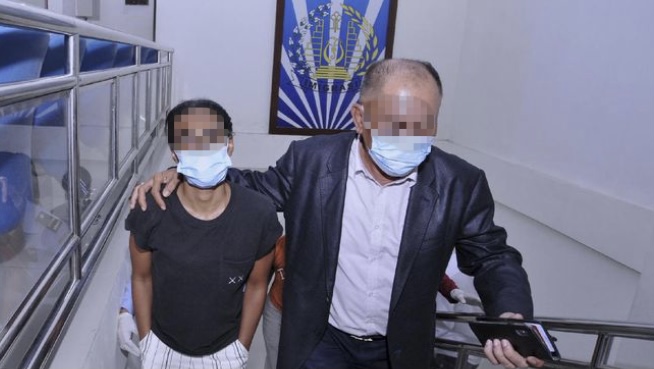 In addition to the e-book, Gray was reported to have provided private consultations costing USD50 each for Westerners keen on moving to Indonesia’s island of gods.

Kristen Gray stated that she is not guilty Kristen Gray on 19th January at the Bali Regional Office of Ministry of Law and Human Rights
Image adapted from: @BetterWithBill

As reported by local media, Gray does not think she was guilty of the accusations and believes she had not violated her visa by overstaying. She also told local reporters that she thinks she was being deported due to a tweet she posted about her links to the LGBTQ+ community.

On a local news broadcast, at the Bali Regional Office of Ministry of Law and Human Rights, Gray stated on 19th January with her partner and lawyer by her side, “I am not guilty. I have not overstayed my visa. I have not made money in Indonesian rupiah in Indonesia. I put out a statement about LGBT and I’ve been deported because of LGBT.”

However, according to Indonesian officials, Kristen Gray is in fact being investigated for providing information that has caused uneasiness to the public, by motivating an influx of travellers to Indonesia that has closed its borders to foreigners till 8th February 2021 due to the heightened number of COVID-19 cases.

Moreover, the social visas obtained by Gray and her partner do not allow them to work and earn an income without a valid work permit. Information on short-term and long-term visas for foreigners in Indonesia
Image credit: cekindo

Gray and her partner have been deported under the Indonesian immigration law, found on article 75, paragraph 1, law no. 6 of 2011 that states that immigration officials are authorized to carry out immigration administrative actions against foreigners in Indonesia who carry out dangerous activities. When Twitter user @mahoushojo__ earlier questioned if Gray and her partner had been paying taxes like local Indonesian citizens do, her partner tweeted in reply, “Why would I have to pay taxes if I never made [IDR]? I pay American taxes for making USD.” Her answer implied that since she did not earn Indonesian rupiah in Indonesia, she believed that she did not have to pay taxes to the local government.

The pair have flown out of Indonesia According to the Bali Regional Office of Ministry of Law and Human Rights, both Gray and her partner have flown out of Bali’s Ngurah Rai International Airport to Jakarta.

They have since boarded a plane to fly home to the US on 21st January.

Netizens are unhappy with Gray’s stance Twitter user @tasilsa pointed out, “[Why do Americans] think their peace of mind is worth gentrifying a whole island and pushing locals out of their own lands and into low-paying jobs [because] now everything there is built to cater to foreigners[?]”, tagging Gray in her tweet.

This tweet referred to the view that how US citizens, such as Gray, visiting Bali for tourism and to destress had led to the gentrification of the island, displacement of locals, and forcing locals to work in low-paying jobs due to the island’s economy being dominated by the tourism industry. TikToker @kaimatamusic responded to Gray’s statement that Bali was a LGBTQ+-friendly place: “If you are a queer foreigner living in Bali, and you think Bali is queer-friendly, well, listen up. It well may be the case for you. However, please recognize it is because a) you are a foreigner, and b) you have economic leverage since the Indonesian local community is financially dependent on keeping you happy. So, they don’t mess with you. Please realize for the rest of us Indonesians on the island, this is not a queer-friendly place.”

She cited how LGBTQ+-friendly businesses in Bali are often raided and ordered to be closed down by authorities, and that government officials have proposed conversion therapy for the LGBTQ+ community, causing many LGBTQ+ Indonesians not to disclose their sexual orientation or gender status.

Encouraging others to move to Bali in a pandemic, flaunting luxurious accommodation, making money in a foreign country while allegedly not paying local taxes, and ignoring how local citizens and LGBTQ+ communities don’t get to enjoy the same treatment affluent tourists get would understandably rub locals the wrong way.

When travelling to any country as a tourist, especially in a pandemic – it bears repeating that international visitors should do their research and respect local laws and communities. While tourist spending is essential to Bali’s economy, the health of local residents and safeguarding the country from COVID-19 is of higher priority for now.

For more Indonesian news, check out: